On this beautiful summers day, we decided to traverse Crib Goch on the way to mount Snowdon. Crib Goch (red ridge) is probably the most impressive scramble route in Wales. Jacob and I met up withe Eddie in Llanberis and started off on the Pyg track towards the foot of the ridge.

As soon as you reach the top, you find yourself on very uneven ground on a narrow ridge. Big drop on your right, more gentle drop on your left. El-supervisor can been seen hanging from a rock. This was mostly due to his clumsy rock climbing technique and not to the promised attempts to finish his life pr 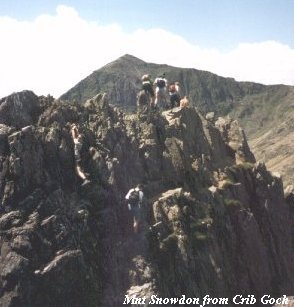 ematurely on this trip by his companions.

It was obvious that these attempts were going to be unsuccessful since the average Friesian or Dutchman anyway (Jacob seen here below just before he reaches the top) was way out his natural habitat of dykes, lakes and windmills.

In the mean time the question was raised why Frysland was not protected with Dykes of Snowdon rock quality. The export would give massive employment to Wales and would save a lot of maintenance work and draining problems in the Netherlands.

Therefore a research project was initiated to find out whether Friesland would not sink altogether under the new type of dyke, which might be a nasty side effect or solve the problem altogether. Research never stops. 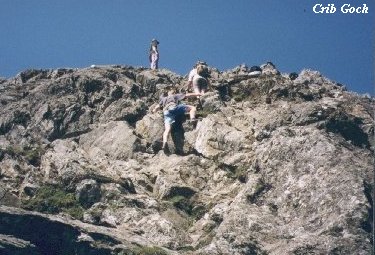