Having done the Welsh Matterhorn Cnicht in Wales, it was time to inspect the real thing. The Swiss real thing to be precise. And so we left on the 14th of September 2002 for the Swiss alps. Easy as a Jet can be, we arrived in Geneva, to find out that our French was not up to date, and the Genevanese proportion of English speaking people was rather small. We therefore happily trained past our intended camping site for the night, while eating sandwiches. Not the first time that happens to me. But luckily, the freshly bought Swiss maps showed another camping site in Morges and we traveled a few miles illegally on expense of the immaculate Swiss railway.

After we arrived at our camping site on the shore of Lake Geneva, we were almost arrested by the friendly owner for not registering at the dark empty registration office. The friendliness of the Swiss was consistent throughout the whole trip.

15th September, to the mighty mountains

Next morning we jumped on one of the many trains, on time, clean and electric. A very unusual experience in the UK. We changed trains in Visp to Zermatt. Our attempt to do some shopping on Sunday was quickly shortened by the conductors face of disbelieve after we put the question to her ..."Shopping ? But it is Sunday". Yeah I know, but were from Britain. 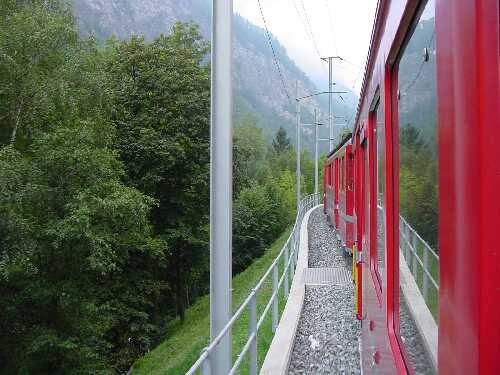 Train from Brig to Zermatt

The train trip up to Zermatt is impressive to say the least. Narrow valleys, deep drops and wild rivers to cross. The road on the other side carrying cars and coaches up and down was usually hidden. In Täsch all road travelers were forced to come to their senses and jump on the train, as Zermatt is sort of piston car free. Another example of much to learn for the home front. The town is a very peaceful noise free resort just buzzing with electric cars and tourists. 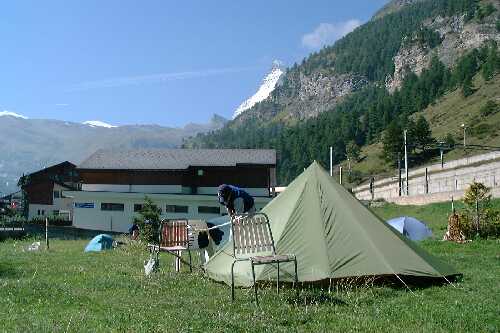 It took my brain about 30 minutes to realise there is definitely less oxygen in Zermatt (1600 msl.) than in Selattyn (450 msl.). It was even more obvious when we started to climb on our little acclimatisation walk towards the Matterhorn. 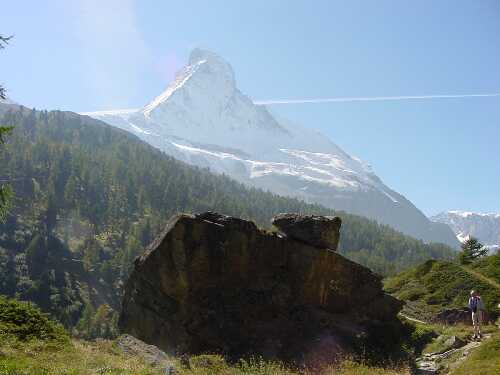 A first view on the Matterhorn

We took a well indicated footpath towards Zmutt (1936 msl.) which enters a valley along the north slopes of the Matterhorn. It is, sadly enough, the only valley not dominated by ski lifts. The footpath runs along the north side towards what used to be the foot of a huge glacier, but which has shrunk significantly in the past 50 years. We climbed up to a waterfall at 2200 msl., enjoyed the beautiful view on the Matterhorn, Tête Blanch, and Tête de Valpelline and then returned to the campsite in order to save some legs for the following day. 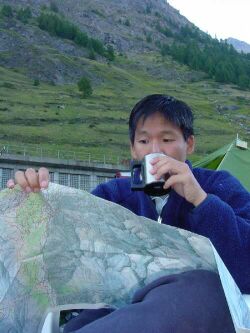 Tomoki planning the day after

The plan for the next day was to acclimatise a bit further up to 2500 msl. and train the legs for the real work.