Yep, and again we left early in the morning. This time the tour operators failed miserably to organise a mini-bus, so cars were used instead, spreading the travel risk a bit. Approaching Snowdonia, we could see snow covered mountains ahead. We stopped at the Royal Goat, one of these hotels in Beddgellert, where you are welcome to pay your parking fee in the morning, but would last 3 seconds before being kicked out on return of the muddy walk. 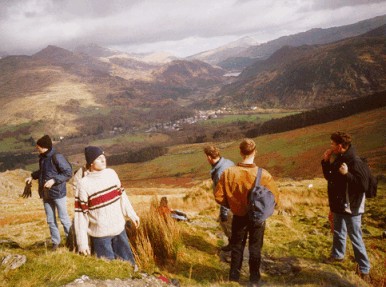 Up the mountain we went and it did not take us long to loose Etienne, who responded to the call of a hunting party. It was not sure whether he wanted to join the hunters in their fair quest of shooting a fox (outnumbered 40:1) or whether he was running away from the dogs. Luckily, we were soon lost ourselves and the path was found back when we were well on our way down again, hours later.

We went up on the south-east slope of Moel Hebog, which kept us a bit out of the cold wind. By the time we got to the last steep, rocky bit, the field of contesters spread itself across the mountain slope and we arrived one by one in freezing wind at the top. There, we had lunch in the shelter of a sheepwall. At this point some of us repeated some Dr.Mengele experiments by asking a innocent by-passer to take a picture with each of the 13 camera's we carried up the mountain. The poor man is still standing there, waiting to defrost in the spring. 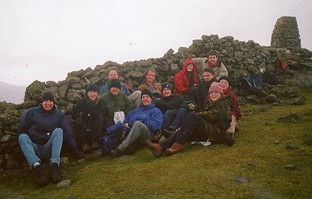 Shelter at the top

From there on, we went down to the 2nd part of our trip: Moel Ogof. Moel Ogof in named after the famous Welsh resistance fighter Ogwain Glywdr, who took apparently shelter in a cave (ogof) to hide from an English hunting party. Maybe they are still searching for him, since we met several lost hunting dogs on the top of Moel Hebog. Not surprising, since it took us a good hour and a wide fan-out, to find this well hidden cave. Ogwain was not home, but he had clearly left the tap running and the floor was a mess. We didn't stay long.

The weather changed a bit for the worse and hail rained down on us. According to the map we were just about to enter a forest which could protect us from the weather, if it was not for the fact that the whole forest had disappeared. Stolen. Gone. No more. Harvested.

So there we walked, following a stream, jumping from side to side, to avoid the muddy bits. The thieves had left a bit of forest for us and when we entered it, the trip got more exiting. Wind had felled a few trees from the outside and they had fallen towards the inside. The path we followed was on the inside, and we had to climb over plenty a tree. The worst obstacle was a tree that had fallen over the path were we were supposed to cross a steam. We all made is safely to the other side except for one member of the group who found it necessary to damage the tree even more. And when we said it had nothing to do with the tree he got angry. T.t.t.t.t.t.t.t. 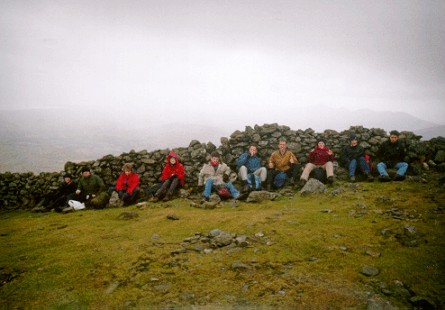 More shelter at the top

All we had to do from there on was to follow a path (finally) across some marshy ground back to the cars which we did. The Royal Goat was too posh for exhausted and muddy fell walkers. So, to speak with the Dutch writer Marten Toonder, "we all enjoyed a simple but nutritious meal afterwards" in the Last Inn back home.