There is so much for say, for Scotland in May (we were told).

Anything not related to the weather turned out to be inaccurate. What would those men of the MET in their warm London offices know about the real Scottish weather?

After searching the web for some nice backpack trip descriptions, I came across a website that described a nice route which we would partly follow. Pictures showed it all in glorious sunshine. Heights and distances were checked and after this Tomoki from Kumamoto in Japan started looking for another walking partner to share the heavy rucksack load.

Brice from Lyon in France, doing part of his training in the UK, was promised a beautiful holiday in the Scottish highlands. Ha.

We planned to go for a week to Morar, which is just a couple of miles south of Mallaig, on the west coast of Scotland.

We would do some short walks for a few days followed by a 3 day hike starting from Morar, along loch Morar, across the mountains to Inverie and the ferrie back to Mallaig. Total distance about 20 miles (30 km), with 1500 feet (500 m) to climb. 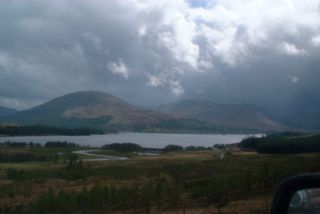 Piece of cake. It was only that an 8 mile stretch did not have a path marked on the OS map but was obviously not a problem for us experienced backpackers. 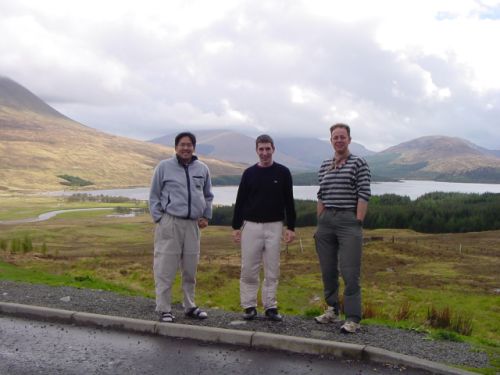 Cold stop on the way to Glen Coo

Transport went in the pre-planning stage from plane to hire car to train to settle on Tomoki's ever so reliable Vauxhall Astra with mono radio and sometimes opening right front door.

We left early in the morning and moved quickly along the M6, navigated Glasgow, peed in Loch Lomond, got some shopping in Fort William to get to our camping site in Portnaluchaig early evening.
It was a rather nice camping on the coast, with views across the white sands on Rhum and Eigg when the wind and rain lost focus for a moment. 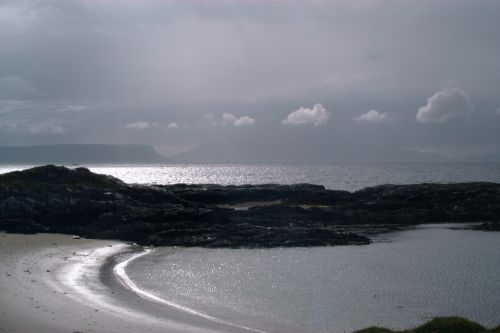 Rhum and Eigg in the distance

Got settled nicely. We did some shopping in Mallaig during a hailstone storm and in the afternoon went for a short shore walk to a cave at Eilean Ighe, but the tide cut us off before we got there. 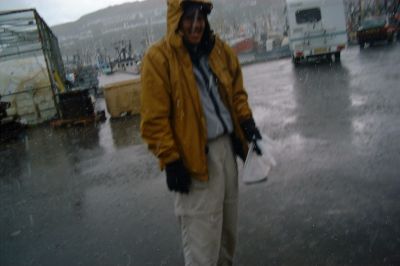 The next day, waiting for the weather to improve, the first walk was planned to Loch Eireagoraidh, a little east of Mallaig. We parked the car at the Glasnacardoch Hotel, one kilometer south of Mallaig and walked through the swamp to Loch an Nostarie 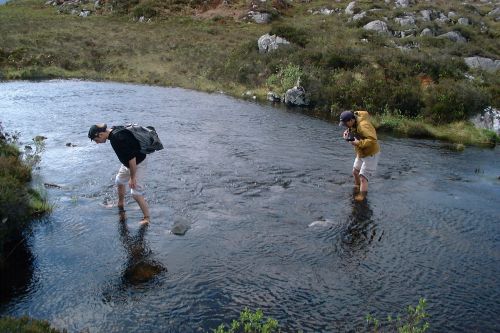 Now one needs to understand that lochs are often connected to other lochs. Our Loch was connected to Loch Bhada Dharaich and on the connecting stream the map said : "Stepping Stones". That must be a crossing of some sort and we decided to go for it. In most countries, stepping stones are large bolders that can be seen rising above the water. In Scotland that is not always the case for a logical reason: as you are probably already soaking wet anyway, the bolders do not nessesarily have to be above surface level as it makes no difference to your already drenched state. 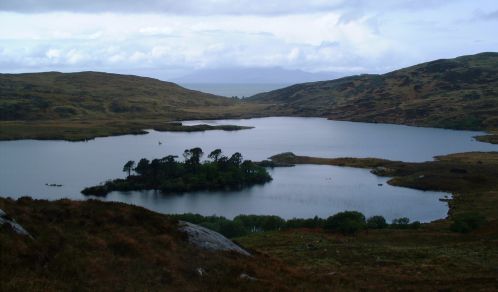 Loch Nostarie and Rhum in the distance

We guessed the right spot, took our shoes off and managed to cross. At the other side we dried our feet off which was probably the last time it made sense.

We climbed up slowly to Loch Eireagoraidh where we decided to have lunch. Lunch was interrupted by one of these dark clouds and we took shelter behind a large stone. Some lunch seats were better sheltered then others. As I prepared the tea, I naturally sat in the least exposed spot. These things have priority..

The way back down set the mood for the holiday.....wet. By the time we reached Loch an Nostarie again our feet were thoroughly soaked.

Back at the tent, the boots were packed with newspaper articles about the search for weapons of mass destruction. Finally some use.