If you ever read the National Trust magazine, the last pages usually advertise Nile cruses, weekend shopping in New York and all kinds of plastic surgery and other body re-vitalisation procedures. I was struck by one that advertised a skin remodelling procedure in a nice outdoor environment. Being over 40, this appealed to me, and a day out was planned on a fresh February day.

John Pierce, who is of similar age was clearly attracted by the same advert and together with another John and Kees (who was clearly of an age where you don't need these procedures, but nobody bothered to tell him) we set off to the foot of Cadair Idris. 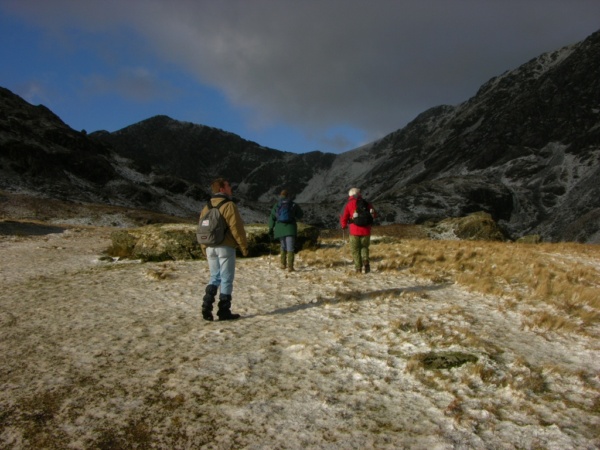 As you climb up from the Minnfordd car park near Tal-y-Llyn, on the South side of the mountain range, you pass an old forest of which many a tree had fallen over due to the last winter storm. Nant Cadair was carrying plenty water, and would, just like last time, block our way home. We took the Minnfordd path up to Craig Cau. It would shelter us from the blasting wind up to Craig Cau, where the beauty procedure would start. We met up with an official Snowdonia mountain guide who decided on his day off to do a short walk up to Craig Cau. He looked the part, grey beard, worn face, with rare friendly all-the-time-the-world eyes. 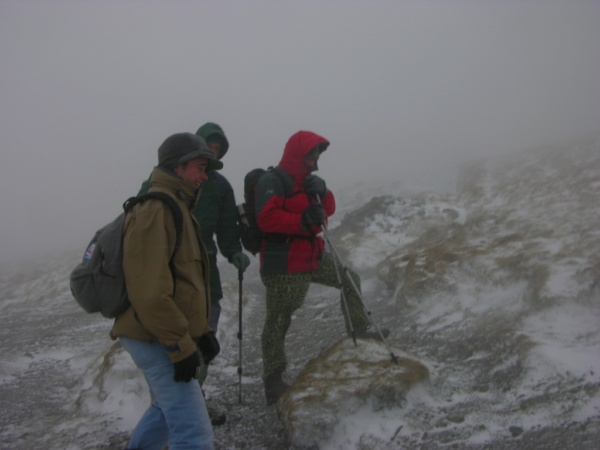 Facing North, towards Cadair Idris, we started to struggle against the wind. It was a painful procedure, which wasn't, as you expect, put in the advert. Layer after layer of old skin was removed every time you tried to look up to see if you had reached that steep drop on Cadair Idris North face. 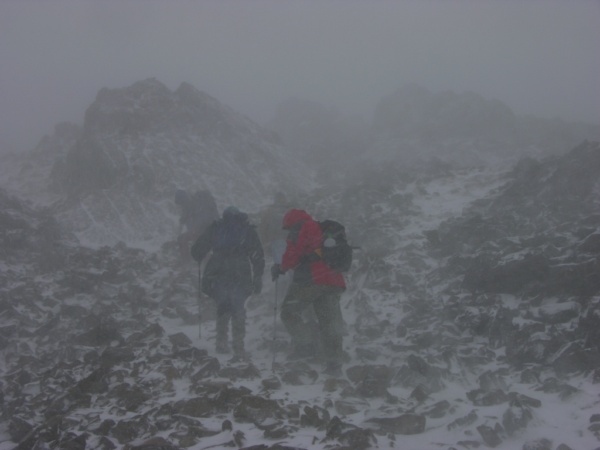 And then it hit us.

Strangely enough, halfway we found some other seriously kitted out beauty seekers sitting on the frozen rock, having a pick nick. Que?

Our mountain guide had changed apparently his route and followed us up the mountain towards the shelter. At the right moment, where I was about to sacrifice some of my fingers to take look at the map, he guided us towards the hut. 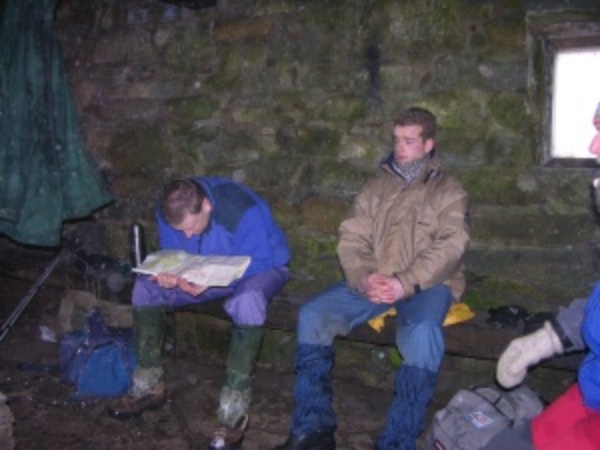 We all gathered in the hut and enjoyed a semi frozen lunch. The picnic party, having been snow blasted to their senses, arrived as well. Our (I thought by then it was OUR) mountain guide pointed out that the roof of the shelter had nearly been blown off in a previous storm and was now tight down with some extra metal wires to the main central beam. Some maintenance was needed, and John promised to pass it on to Amanda. 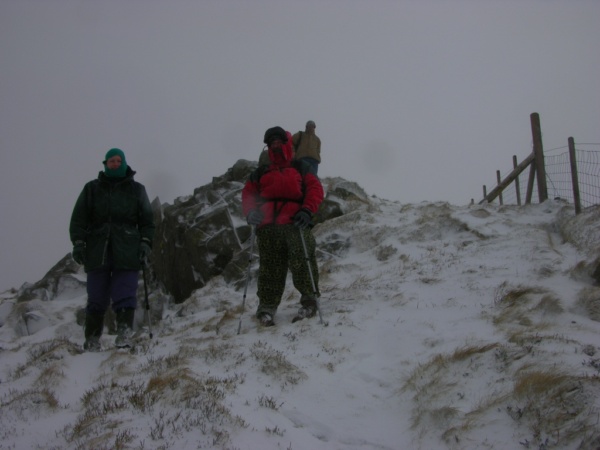 After the lunch we left the peaceful shelter, with the North wind blowing hitting our left cheek we set off East. Our view was limited by the clouds. I didn't bother to set my compass as I had been here at least 2 times before, and my navigation skills are known beyond the UK borders. We would just follow the instruction the guide gave us in the hut 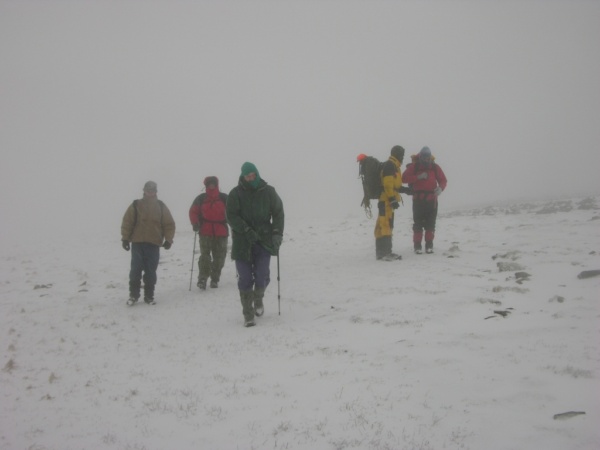 Head East until you hit a fence and then turn right. You can't miss it.

Well, it was that the picnic party came to their senses when facing the North wind again head on at the edge of a steep descent. The more experienced readers will have figured out that we changed our direction by 90 degrees towards the wrong valley but the cold had clearly slowed our otherwise very sharp brains. 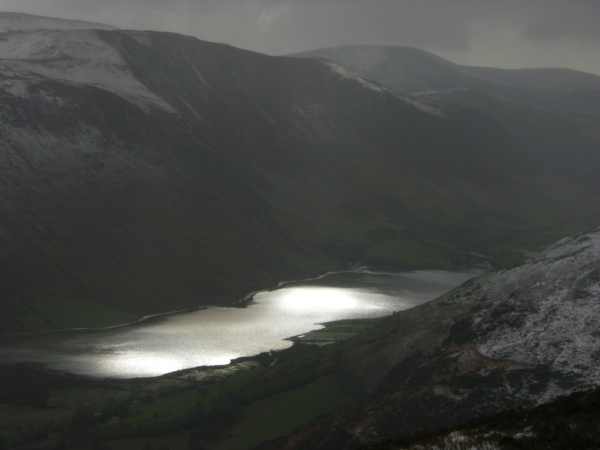 We now new to avoid any steep drops to the North and we found the fence. We soon dropped from underneath the clouds and had spectacular views on Tan-y-llyn. Slowly the snow became wet and we sogged towards Nant Cadair. Our guide had already described where to cross the stream, even the stepping stone in detail. Obviously, I ignored the advice, as I like a bit of adventure. Last time we jumped.

Our guide must have know that we would head for trouble and while we struggled to cross, he jumped across 2 rocks he had described earlier and guided our stranded party to the other side. 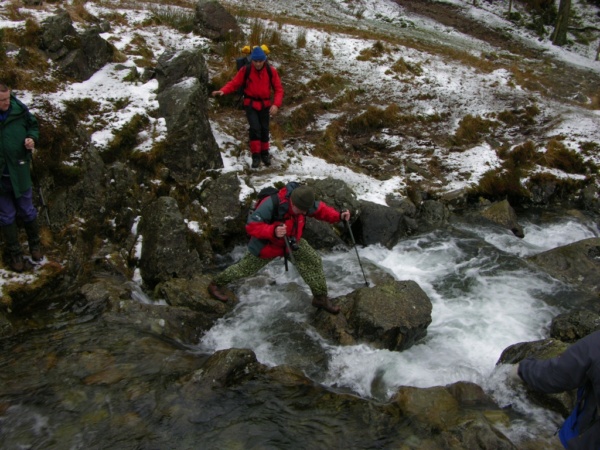 Having reached the other side, we followed the track we had used on the way up to the car park. Valuable information was exchanged between John, who was planning to go to Tibet and our guide, who happened to be experienced Tibettan guide in his spare time. Spare time is not distributed equally across the planet.