You cannot trust a Welsh mountain. I've known it from the start. The early morning news showed a weather forecast map with 3 large suns hovering over North Wales, beaming pleasant sunlight down over a pleasant part of the country. Armed with sun lotion and cool sun glasses we were ready for another walk. The pleasant sunlight would help us as we had an inspection team from the North East, checking our area for suitable walks. First impressions are important at these early stages of relation building. 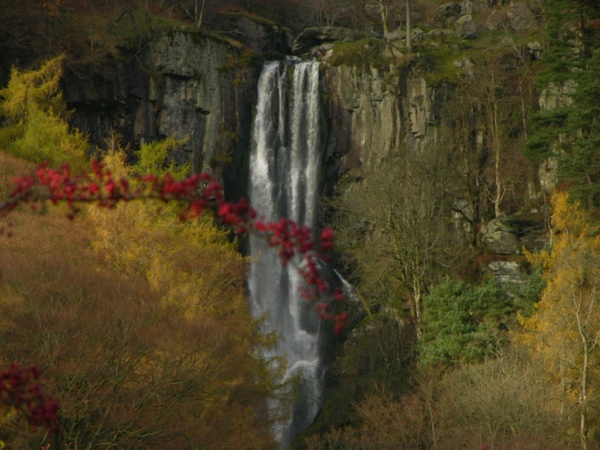 So, Denise our guide for the day, had us assembled at the foot of Pistyll Rhaeadr, Wales highest waterfall. At this time of the year plenty water runs over the top and together with the autumn colours helping to produce some nice pictures. 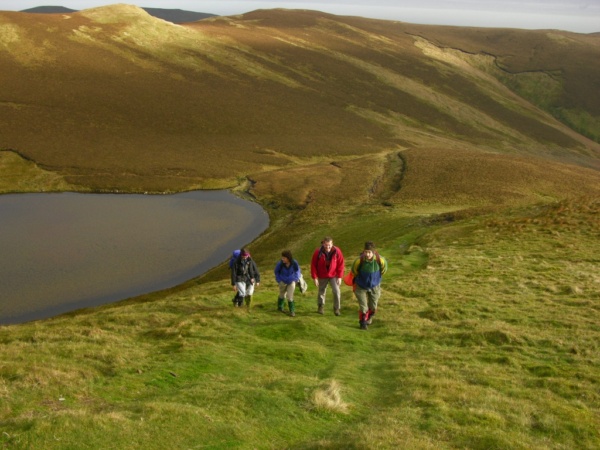 After a short inspection of the toilet facilities, we set off towards Llyn Lluncaws, a lake at the foot of the Moel Sych and Cadair Berwyn. It takes only half an hour to reach the lake, which appeared to be frozen ... with the wrong kind of ice. Not to be walked on for temperature sensitive pedestrians. Wait until later in the year is my advice to less experienced walkers. 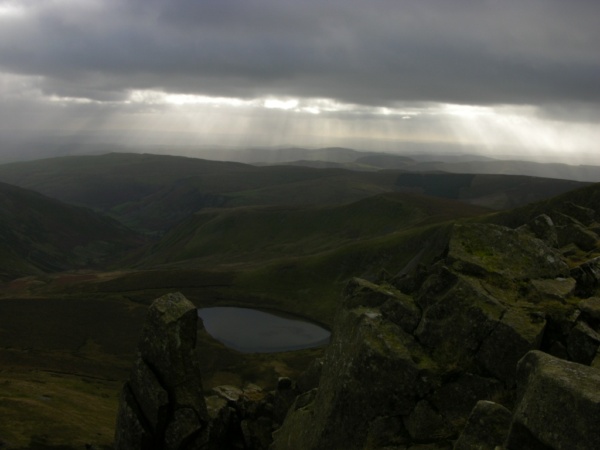 Clouds from Moel Sych and the track to Cadair Berwyn

From the lake the path runs up the East shoulder of Moel Sych and we were met by the icy wind when we reached the top. I'm still surprised how few web sites offer advice on how to climb a mountain out of the wind. The first frost had tried to harden the bog somewhat but not quite good enough. I saw the North East ramblers team making notes and that was worrying and we were probably scoring minus points.

We took shelter in the cairn Denise claimed to have build just the day before. That was a plus point then. We had relative peaceful lunch until quite unsuspectedly, the territorial army surrounded us. Heavily armed soldiers one by one came out of the snow clouds. With their current focus on Iraq, they train for sand and desert type of environments. They were not prepared for the unpredicable Welsh soil. We saw 2 of them disappeared knee deep in the bog in a swampy bit which more experience walkers amongst us tend to avoid. I had a flash back to the Sheep prigrimage where little Welsh miners had apparently sank in the bog carrying slabs of slate.

At the end of our lunch, a proper snow storm announced itself, despite the forecast and we started to put on our Welsh Weather gear. And that can be very dangerous with the army practicing so near. As Annabel was wearing a totally black anorak, and only her eyes appeared from a narrow slit, she could easily be mistaken for a Moslim ... and therefore a terrorist. My logic is guided by stories from the Daily Mail and Mirror (quality papers) designed to whip up fear. Only our collective sharp state of mind saved our lives, as we desperately pulled her legs down before she waved hello to one of the soldiers. You can imagine the new headlines the next day: 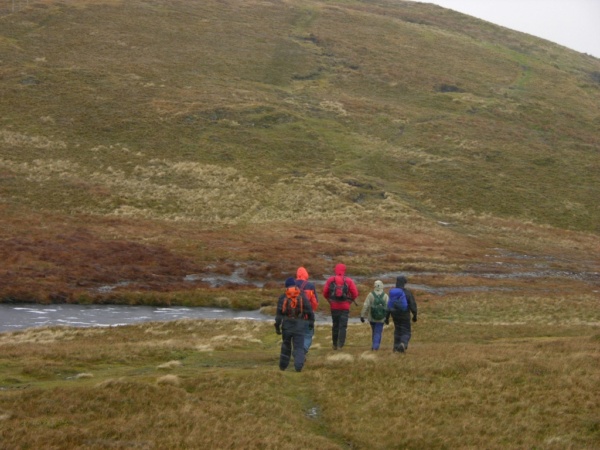 The sunny weather settles over the Berwyns

As the snow hit us, we went to the end of the Cadair Berwyn ridge (827 msl) and then made a u-turn to Moel Sych. By the time we reached Moel Sych the snow storm had subsided and we walked in the clouds. Mist in other words. Not a problem, as our navigation skills would bring us back down. Down alright, but to the wrong valley. 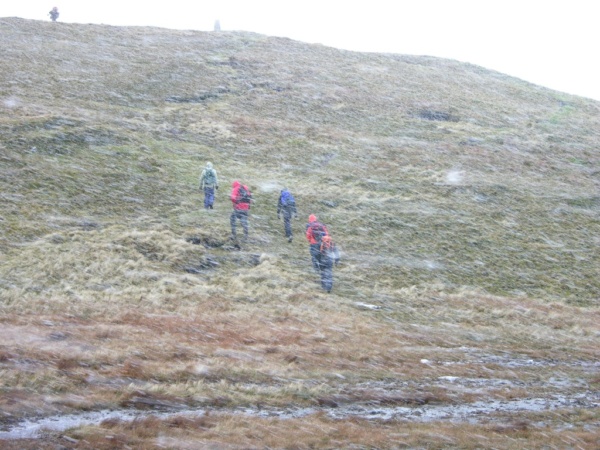 As we descended, some of us heard, but not me of course, Bernard's warnings that we should head more South East, instead of South West. But why should you rely on a compass if you've got an excellent build in sense of direction, like myself. 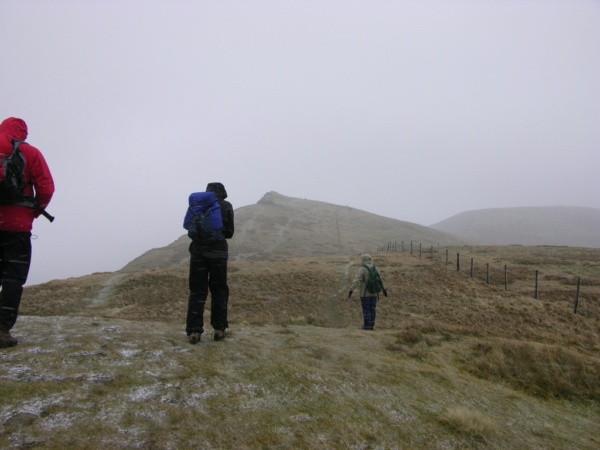 As we walked from underneath the cloud's skirts, the landscape around us did not appear familiar at all. This can only be caused by two things: 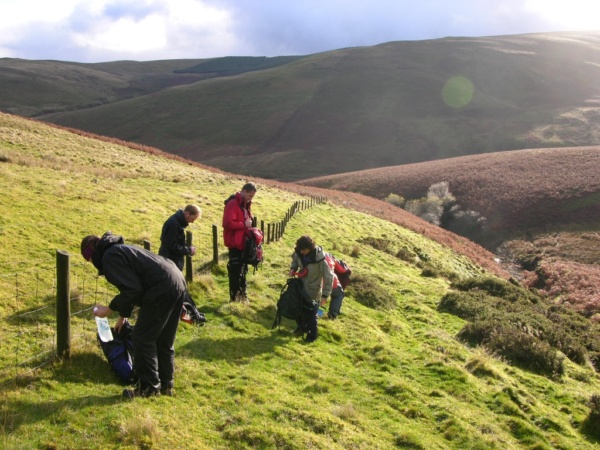 Not hopelessly, but it was embarrassing, and the North East ramblers note books came out again. Time to make it up with coffee and cake. And luckily, at the foot of the waterfall, a cafe is available to calm down nerves and to erase mental notes. Before we reached the cafe, we had a short stop at the top of the waterfall. 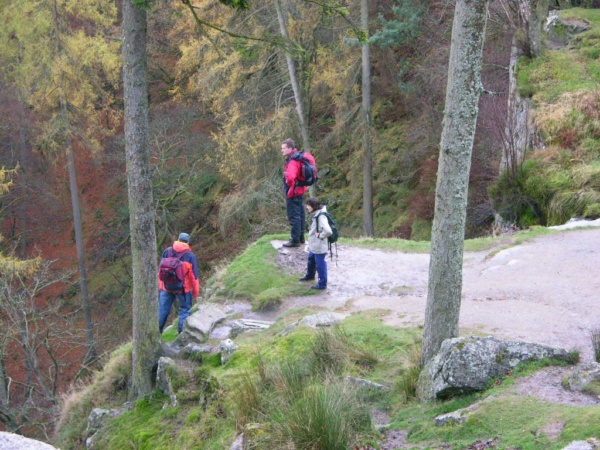 Autumn sun and the top of Pistyll Rhaeadr

The cafe has got a novel way to clean the tables. The centre area is cleaned by a cat, and anything else, that can be reached by a rather large dribbling red-eyed St Bernard, is slobbered away nicely. Saves on staff I guess. 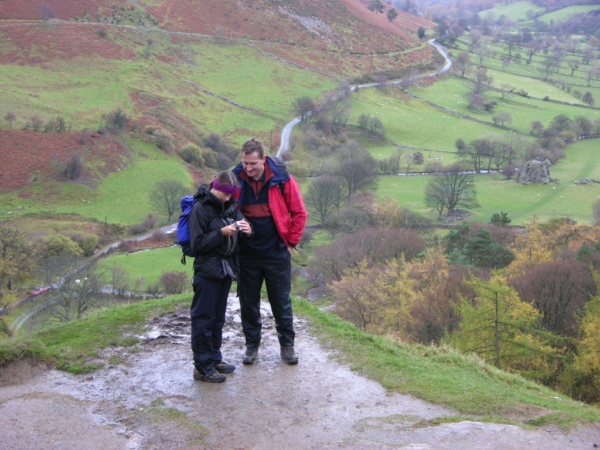 Checking photographic results at the top of Pistyll Rhaeadr

After the cafe, we headed home again and finished the evening with a meal in the Corn Mill in Llangollen. As Bernard kindly paid for all of us, we expect the final report from the North East Ramblers to be slightly milder.