As you all know, December 11th is national rain day, and we celebrated it with a traditional wet walk up Cadair Idris (893m). The invitation for the walk contained some strong language to warn off those thinking to set off on trainers and the rest of this section is rated "C" for caution.

Early in the morning, the French tour operator Etienne, noticed that the bus driver Frank, could not count much further than 8 (well that why one might chose to be a bus driver), since we were with 10 people, and Frank showed up with an 8 seater mini bus. As nobody volunteered to be strapped to the roof, we drove back to the garage and swapped the bus for a less modern, but more spacious 13 seater mini bus. It had several build it safety features

While driving the entertainment was provded by the assistant driver opening the right window, climbing half out and pushing window wiper back into action. 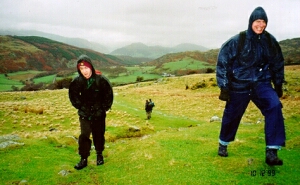 It stopped raining as we arrived in the car park, which was a bit disappointing. The path took us up the Pony path, west of Cadair Idris and as we reached the ridge, the wind and freshly imported Irish sea rain hit us full in the face. That more like it. The path to the top was a bit boring and worn out by too many tourists, so we had plenty time to think deeply about more pressing problems in the universe. When we got to the top, we had enjoyed so much rain and wind that nobody could be persuaded to a picnic. We all ran for the relative comfort of the refuge build on top of Cadair Idris. The refuge, to say the least, was a bit damp. Some improvement on the indoor lightning system would be appreciated as well. 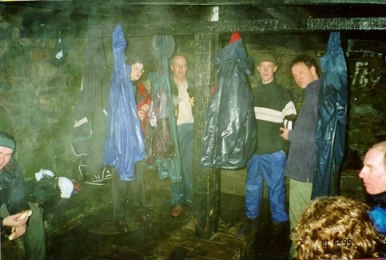 The waterlogged shelter at the top of Cadair Idris

In the comfort of the shelter we decided (or I forced the rest) to try a different route down a more challenging path, which would take us along two lakes and straight to the pub. This last word convinced everyone go for the new route. Sadly, map reading skill had not much improved since the last trip, so we took one gully too soon.

I decided that this would be the title for the film if anything would go horribly wrong and Hollywood would express an interest in the story. We went down a screech slope which was not really designed for tourists. It was not designed at all actually, since loose rock seemed to be laying about everywhere without any real purpose and streams of water came unregulated down the slope. An angry letter to the Welsh tourist office will sort that out. The acoustics of the area are fabulous as many a female scream was amplified triggered by a sudden slip or mini avalanche.

But finally we got down to a lake, aptly called Y Gadair and found the path back. We Followed the path to the lower lake, with the even better name of Llyn Gafr. I guess, before the rain season, one could just walk across its outlet, but the arranged excess of rain made crossing impossible and and we had to walk downstream to find a place where we could jump the wild torrent. 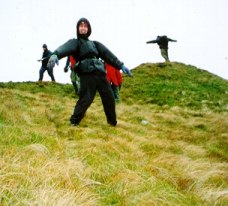 Some of us made it. Others gave up and just tried to walk across. Not having read the bible properly, they got lost in the middle of the torrent and followed it downstream for a while. There they were joined by closer to the kangaroo related species and slightly dryer members of the party. This process had to be repeated a few times, since the Welsh tourist office had put a few more wild water streams in the landscape to entertain us. Even the sun was visible in the last 30 minutes of the walk. All very disappointing on national rainday.

We finally got to the pub where we drank some courage and walked back to the mini bus, which was without incidents (ignoring the window wiper hiccups) back to the warm comfort of the nurses home.