The day of the Welsh mobilisation, October 1999

On a reasonably dry morning, tour operator Etienne and crew all jumped in a minibus (a 17 seater is not really a mini bus anymore). We picked up some other Frenchmen (Guilaume & Co) at Newi University, Wrexham, and left for the Aber falls on the north coast of Wales, just a few miles west of Conwy. The group was rather large this time with 24 members. Some of us dressed for a summer picnic, some for a winter walk. This would spell trouble.

We left the van in the car park at the bottom of the park and followed the easy route through the valley to the bottom of the Aber waterfalls (Rhaeadr-farw to be more precise). Then the path started to climb rather steeply, with some deep drops on the right hand side. Once on top of the waterfall, the path eases out into the valley. There, just below the cloud level, we had lunch, while some members (Alexander), thinking ahead, tested the slipperiness of large rocks. They were to be found slippery.

After lunch the party went up the sleep slopes of Llwytmore (849m) and it was here that 3 members of the group decided to go back. They got a map and simply had to follow the path downstream. I asked of them, having read Hansel und Gretel a few times, to put a stick behind the window wiper as soon as they reached the minibus and then go to the village pub to wait for us. 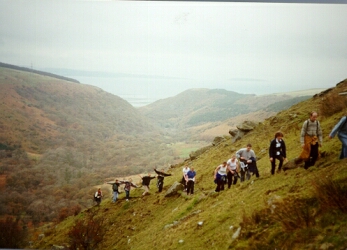 The rest went up to the top, covered in mist, were we took shelter between a pile of rocks. Here, even the more persistent sun admirers put on some extra clothing. Following the compass, the route down on the other side was fun, since some members did not have proper boots and struggled to stay upright most of the time. If they would have worn had slightly larger shoes, they could have skied downhill. Some of us also experimented with alterative methods of descend. Belly sliding would be subject to further development on the next trip. 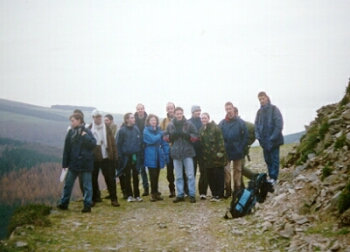 Aber falls, on the way down from Llwyntmore.

At the bottom, we had to go round Llyn Anafon and cross a few streams. From there on the route was easy and a portable radio made it possible to listed to the football match between Scotland and England. At about 16:00h, one hour before dark, we got back to the mini bus, but no stick.

Immediately, a small group rushed back up the mountain again to try to find our missing party members. The 4-wheel drive landrover of the park warden was the first indication that something was not quite right. A second, and slightly better one, was the police helicopter rushing over head and starting to search the valley where we climbed up from the waterfall earlier. When we got to the bottom of the waterfall, we saw the missing girls descending with another man, who was so kind to help them down.

Well, the explanation was: they got lost, waited for about an hour in a sheep shelter for help, which is not always immediately available in a remote Welsh valley when you need it, and then, cold, decided to go down. At the top of the waterfall they were a bit unhappy to cross a steep bit of the path and did the right thing: shouted "help" down to those other tourists admiring the waterfall from below.

Now here follows a lesson. Do not shout the word "help" in the vicinity of any person armed with mobile phone. Due to the general lack of purpose, these owners dial 999 for a sneezing sheep, and so it was that the RAF mountain rescue helicopter was on its way, a police helicopter searched and landed in the valley, the park warden was out and the full mountain rescue team was called in. We had to surrender, they outnumbered us 5 to 1.

The warden and the mountain rescue team gave us a lecture. Rightly so, about proper shoes, proper clothes, basic map reading skill and never to let in-experienced walkers wander back on their own.

Well, after these events, we got back to the mini bus and drove happily forever after home.