It was one of these days where you wake up and think, what a beautiful day to stay in bed. Just a pity that I promised 13 people to drive the bus. The river in front of our house, which, at low tide, is also used as a road, was rather deep this morning, and the plan was that Keiths BMW Mozes (see Waterworld II) would open up a wake wide enough for our little Cinquecento to follow through towards the Nurses home. 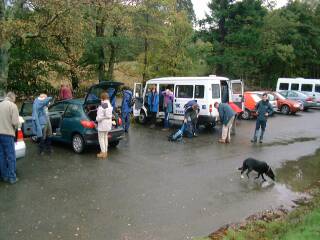 The carpark at the start of the Watkin path

Arriving at the Nurses home, there were only 3 people visible sheltering in the door entrance. But slowly more and more showed up and the bus was packed before we left. The trip to Snowdonia was an experience on its own, with the flooded roads in the Llangollen valley. I noticed that just before Betwys Y Coed the brakes started working again, but as a professional driver I did not worry the passengers about these sort of small details. After a short stop to give an opportunity for the less organised to gather some food for the way up, empty a few bladders, and to give the Dutch contingent the opportunity to ask indecent questions about who "painted" which hair and why, we arrived at the car park between Llyn Gwynant and Llyn Dinas. 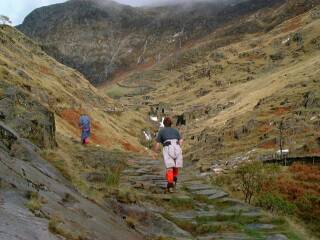 Watkin path coing past mine remnants

The weather had miraculously cleared up, and we set off up the Watkin path towards Cwm Llan (church valley). It was very useful to have a guide dog and the unspoken mental arrangement was made that as long as the guide dog would visit you occasionally, you were within a 2 mile radius of the rest of the group. Only disadvantage was that the wear and tear on the poor animal was rather high, and we might have to upgrade before the end of next trip to a guide snake (no legs to wear down) or a guide Rhino (better feet, and free coat hanger). Bear the extra costs in mind. 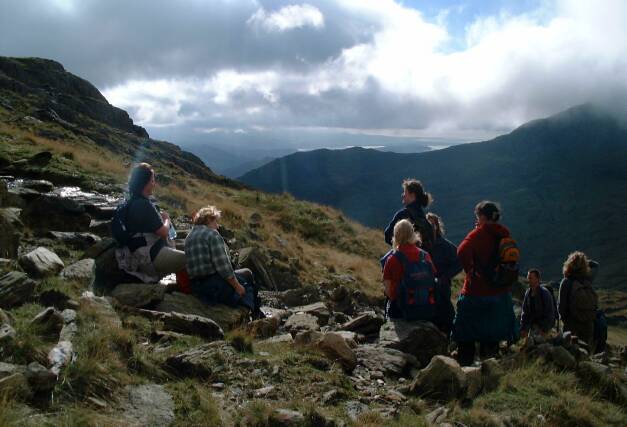 The promised speech by our spiritual leader on the Watkin stone was not held, despite the presence of a detailed book about the Marx Manifesto. A real disappointment, especially for the ghetto blaster I carried up in my rucksack to slightly enhance the cheering and clapping of the enthusiastic mob. It was obvious El Geoffrey was concentrating his thoughts on the planned Australian revolution ahead, and things were slightly complicated with the Americans bombing so effectively innocent terrorist in Afganistan. 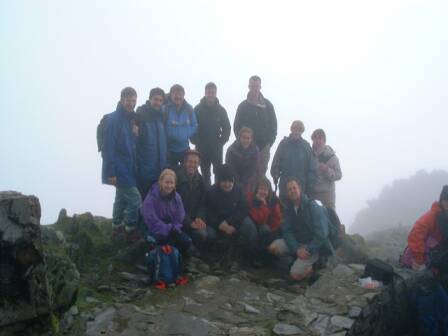 We missed the turn to the old miners grave yard (see The Sheep Pilgrimage) and took the long path up to the saddle between Y Lliwedd and Mnt. Snowdon. Once there, the last real steep bit was a challenge. About 200 tourists were coming down the same narrow slippery path as we were trying to get up. The more skillful part of the group arrived therefore early at the top of Mnt. Snowdon and we had plenty of time for the Spanish inquisition to cool down uncomfortably (he's not used to cold). A few picture were shot to prove the effort but with digital image software these days this could easily be a fake. 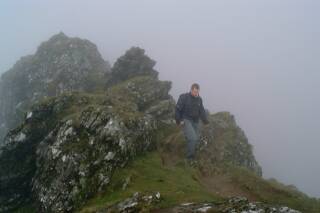 The South ridge with El-Geoffrey coming out the fog

The way down was fairly easy, following the south slope towards Yr Aran and Bedgellert, and slowly walking out of the clouds gave some very special effects at no extra costs. Clouds were quickly disappearing and a beautiful autumn coloured landscape unfolded. 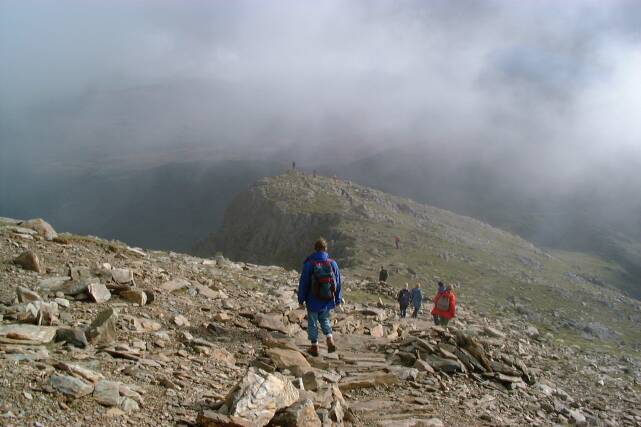 Out of the clouds

The caving instinct took a few of us to a small mine and its exploration was quite an experience and an good example of how well the Welsh have followed that American Disneyland example where you go with an electrical steam train though a tunnel. 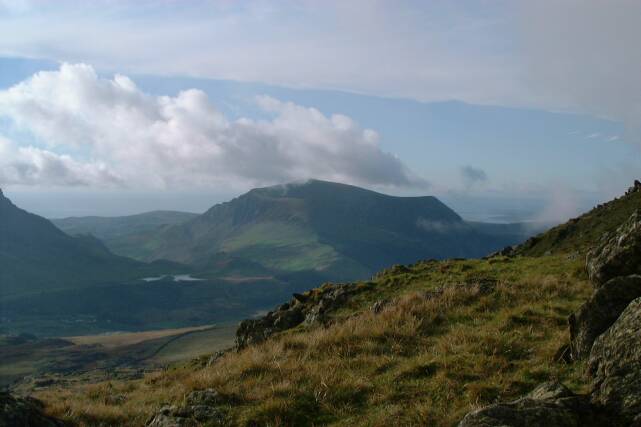 Got back a the mini bus around five o'clock and could just see the sun set on Mnt. Snowdon. The bus took us back to the Nurses home and after a very complex manoeuvre where shopping was done, bus was dropped, kids and Italians collected between 5 cars and 1 bike, we settled comfortably in Nikkies place. There we were to enjoy 3 versions of chilli con/sin carne, red wine on its own, red and white wine combined with carpet, music and real coffee (not suppuh).