Early in the morning, as usual, we left for the Rhynnogs, a mountain range between the Irish sea, Harlech and Dolgellau. It just happened that some of us were not allowed to sit in the minibus, as they were going to take up too much space, talk too much nonsense or were just a member of the foreigner minority group. They drove separately in a private car, performing a ritual dance stop on the way up in an attempt to confuse innocent by-passers.

No hiccups this time with the minibus, as the mutiny of window wipers and speed indicators last time. We arrived safely (ladies and gentlemen, this is your driver speaking) in Pen Rhos forest, just off the A470 next to Bronaber. No rain, so we loyally followed our guide, who held us up several times in order to find lost tent pegs left by the road side some 5 years ago??!! The usual rain hit us between the eyes as soon as we left the shelter of the forest and soon after, the youngest member of the party decided that to walk from the car to the car was a pointless exercise anyway, and she successfully used her veto right to make an early return to the minibus with one of her producers and assistant. 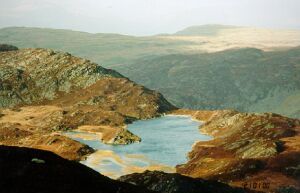 At the same time there was a revolt in the group, caused by a minority, who decided that the taken route was too easy and they left us to use a short cut across the mountain (ha, ha, little did they know about the Rhynnogs). The rest of us stuck to the path and decided to have lunch near a farmers cottage. From there we could see the revolutionary faction struggle through the knee high heather and finally, coming to their senses, bending off to our original path. 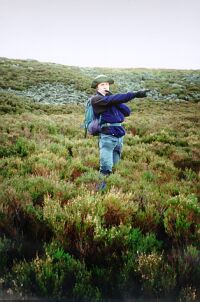 Now our lunch spot was just 200 yards off the T-junction where we left the main track to go north. The revolutionary party was slightly less well informed and before we knew it they were jogging west towards the sea. Some of us thought that eventually the sea would stop them, but others were not so sure. Due to the long trip ahead, an attempt was made to catch them by jumping several sheep walls and using a professional whistle. It was common sense that brought them back. 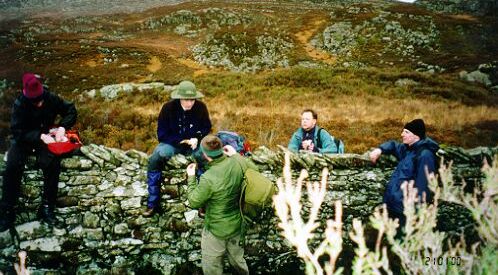 Food before we hit the Roman Steps

From there on the group started to climb across Foel Ddu and experience how rugged the Rhynnogs really are with its long heather, disappearing paths, sprinkled with foot traps left over from the last Welsh war. Even our guide disappeared for a while, leaving the group struggling in the heather, only to re-appear a mile ahead chasing sheep along a lake. Suspicious to say the least.

After another short-cut we finally caught up with the Roman Steps, an ancient route left from the time Wales as still civilised. And true, even against today's standard, were volunteers build stone paths to stop tourist erosion, this was the best build path I have seen so far. 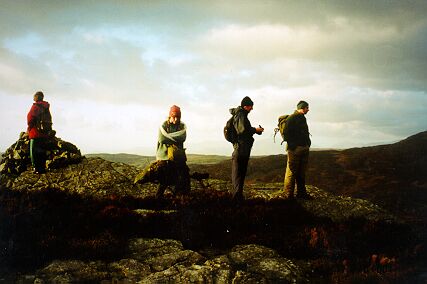 At the top of the pass, we paused for a while, to enjoy the view on lake Ambience (named so by Geoffrey) and the setting sun which was really beautiful. All what was left was to follow the Roman path down into the forest and find the minibus, which we did. Back home, we went to the Last Inn in Hengoed for a meal and drink to give the story a truly happy ending.