The empire strikes back, July 2000

No no no, yes, we were out again to sample the extreme Welsh weather. So extreme that I haven't got many pictures to prove it. The trip took us this time to a less well visited place by the pleasant name of Bleanau Festiniog. A pleasant place on a pleasant day. Don't go near on the more damp days. Slate turns dark gray on a miserable day, and Bleanau Festiniog has a lot of slate later in the year. But we were going to walk. 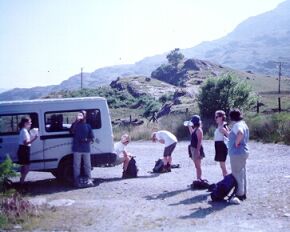 Start from the mini bus

Funny, I've just come back from Norway and a place like Bergen catches a lot more rain on an average day rain than Bleanau Festiniog in a month and yet the Norwegians decided to paint their houses in happy yellow, warm red and sky blue. But we were going to walk.

The trip started incredibly adventurous on a long tarmac road. It was therefore quickly decided that a 90 degrees course alteration was required. Everybody went in the new direction except for 3.5 persons, who kept following the easy route up. We did meet up again and followed the gentle sloped to the top of Moelwyn Mawr (770 m). Waiting on the top for the stragglers, a messenger reached the top with a message (cause that's what messengers do). A young male member of our party had lost part of his ankle and most of his shoe. The ankle was quickly put back but not exactly in the same place. Biologists, pffff. Progress uphill was therefore difficult. Downhill as well. Any progress was difficult really. If you have two kind ladies to assist, it makes the suffering better Well that is what I remember from the last war. So we decided to have an extra long lunch on the top, so we would reach the slightly damaged party member down at the lake at roughly the same time. We did, and they were hungry.

The lake was excellent for swimming, voluntarily or involuntarily Hillary. So we spent quite some time here. 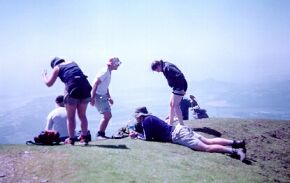 At the top of Moelwyn Mawr

In the mean time a separate expedition was launched to the barred entrances of some old slate mines. But who can stop us when we have a Swiss Army knife amongst us. Inside we found a huge black hole, which was both deep and high. Common sense caught up and stopped us exploring further the unknown. From the top of the abyss some original sunlight shone through and called for a second expedition to find the hole in the ceiling from the other side. I never found it, but El Geoffrey said he did. He kept it to himself, which is not allowed in Wales.

We took the tarmac road back to the van and a desperate sanitary stop made us visit the entrance of one of Bleanau Festiniogs mines, which happened to sell ice-cream. What a pleasant coincidence.