It was only March 2002 when we nearly froze to death on Cadair Bronwyn and the mountain had been a no-go zone for almost 2 years. But now, a new expedition was launched with a multinational team, lead by a famous German guide with an unstoppable reputation. We had been told, by an semi-reliable source, that he would not stop for lunch before a significant peak was reached and the Berwyns are not that high. 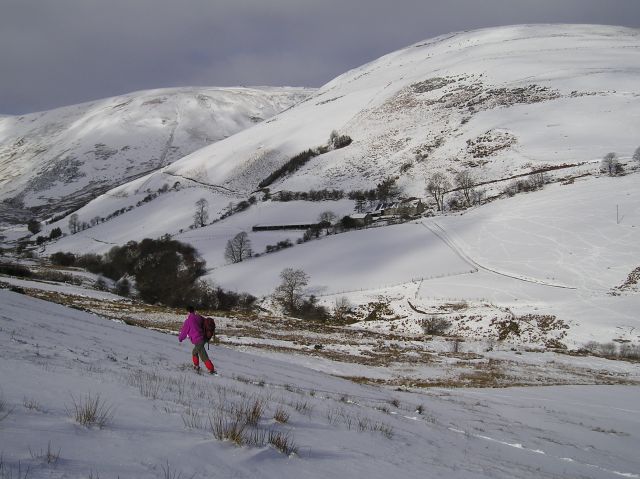 The green Golf was left beside the road at Tuhwntir Afon, west of Llanarmon DC, unlocked, just to test the neighbourhood. The first part of the walk took us through the bottom of Nant Cwm Llawenog, passing through a number of farm yards, fiercely protected by dogs.

One barn we passed was protected by four dogs and the farmhouse next to it had its doors open wide with no-one in sight. I mean, if you hide your valuables in a barn to confuse potential burglars, than four barking dogs give a away the secret location somewhat. Even for us. But we were walking. 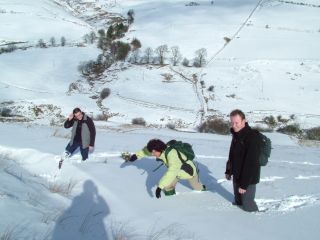 As soon as we left the farm track, the snow drift became a considerable hurdle in places and some of us got stuck at times. The white landscape was stunning, with beautiful patterns in the layers of snow. The snow had gathered between the heather and covered the usual bear traps. It meant that any expedition member could potentially disappear at anytime and with speed the party was going, easily not be missed until the rest had arrived at a sizeable top. It was therefore careful going. 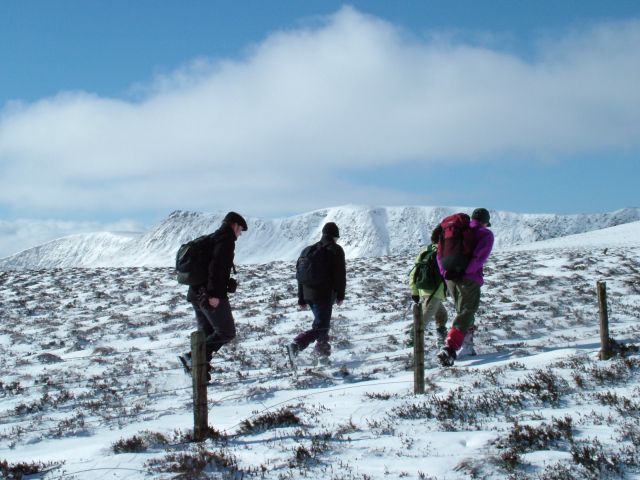 Once the ridge towards Tomle was reached the going became easier. The wind had swept the top more or less clear of snow and was still very busy at it. The biting wind hit us in the face. Tomle(724msl) was just ahead of us. Tomle is Welsh for Tomoki hill, named after an earlier expedition 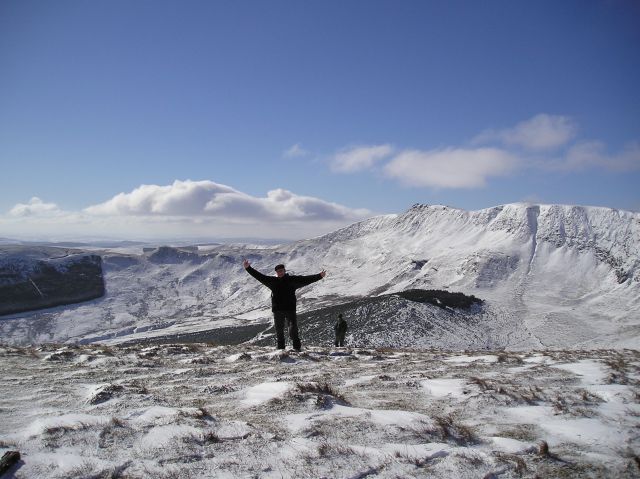 Eric with Cadair Berwyn in the distance

As hunger overtook us and Bernard was within sight, we managed after brandishing several weapons, to convince him of a lunch before the top. I think the "lunch out of the wind" bit did it.

Experienced as we are, we made a quick lunch-snowchair-with-view (Ray Mears, How to survive the East Berwyns, ISBN123.323.1235). It is based upon dropping your trousers, and wiggling in the snow until your have melted a comfortable spot or your bits are frozen off, which ever comes first. Denise deployed a different technique, not described by Ray, which is based upon strategically placing your friend upwind and finishing lunch while he is still able to move. 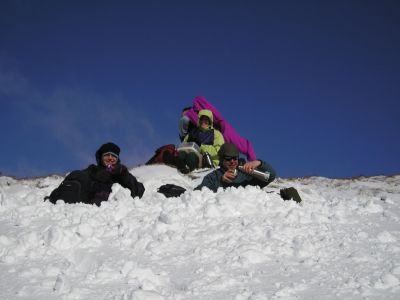 From Tomle we went up to the foot of the far Northern edge of Cadair Berwyn, to follow a snow filled comb to the shoulder between Cadair Berwyn and Cadair Bronwyn. The snow was very deep in this part but at least we were out of the wind...for a bit. 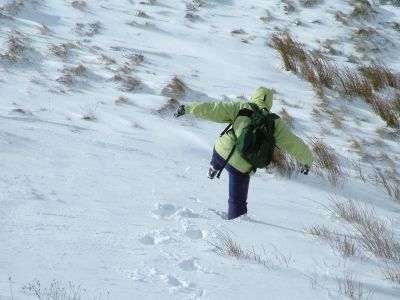 And then... we were eye to eye with the spot. The spot where Shirley still would have clung to a wooden pole if I hadn't taken her hand to force the general downhill direction. The spot where the loyal dog would now be considered an odd monument. The spot where Tomoki's parents would have visited the next time the temperature was anywhere above freezing and erected a modest Japanese shrine.

The small patch of forest where we took shelter that time was clearly visible (picture below).

Anyway, the wind was less fearsome this time and we were even able to look around. Which is part of the satisfaction climbing all the way up...the view. 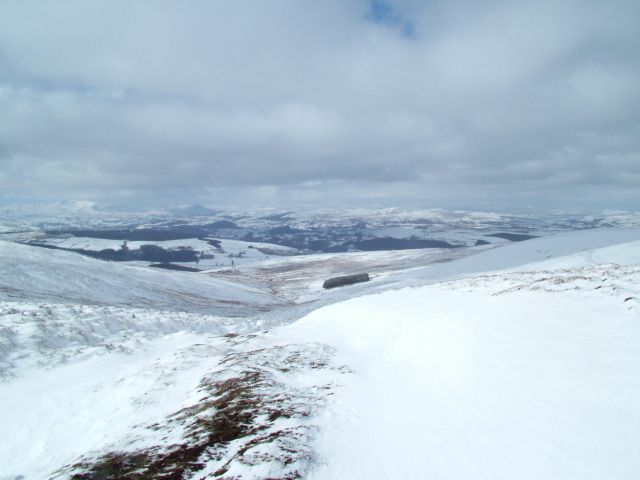 The tiny patch of forest that saved our lives in 2002

We turned east again to slowly descend back into the valley we came from (isn't walking a pointless exercise). We followed Bernard again from a distance. He guided us down up to the point where we came to a 2 meter deep gully running steeply down hill. It was for a large part filled with snow and offered many forms of entertainment. 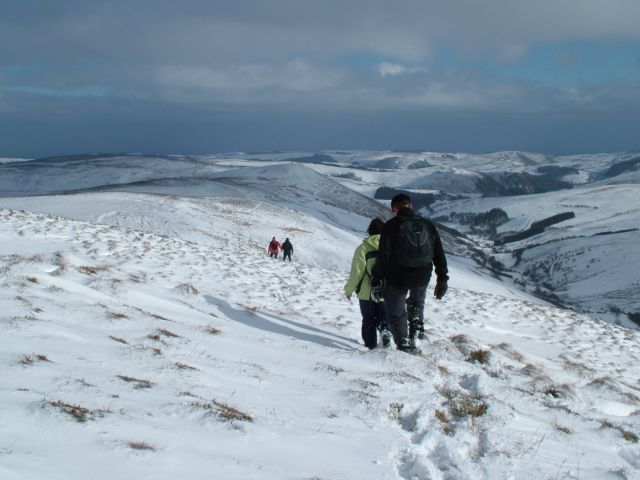 On the way down again

One form is running up to the side and trying to dive through a 2 foot thick layer of snow. Close your collar before you attempt this is my advice. Denise practised bum sliding. Now I don't know what sort of bum she's got, and I'm not going to ask, but mine didn't work. We finally reached the bottom, crossed the stream and walked all the way back through the valley to the car, that is, if it was still there.

All day the snow had been melting lower down and much of the virgin whiteness was already gone. Car was still were we left it, which is saying something about the locals. Try that in Oswestry.