Arguably, Tryfan (three tops) is one of the best mountains of North Wales. I can here the nagging type thinking: "What does make a mountain best then?" Well firstly, size obviously, as size matters to us men. But its only 915 msl (meters above sea level) which is well below its neighbours. As Dutchman I am already happy if it is anywhere above sea level. The Dutch mountains are famous, but only when you can swim. No, for me Tryfan has the right balance between climbing without ropes and stunning views. And obviously, Adam and Eve, which is where it all began so long ago. After they were banished from paradise, they hung around on this exposed hill-top for a while, and, after the first winter, turned into stone. But I'm running ahead... 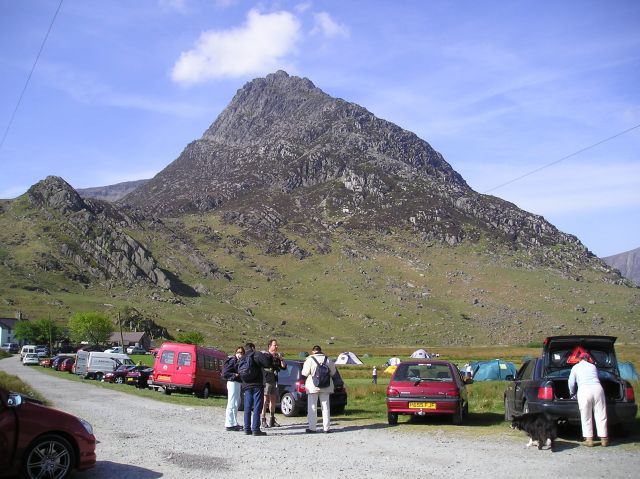 Parking at the foot of Tryfan

This time the party started at the Gwern Gof Uchaf farmhouse, which offers a toilet for those now who are starting to get seconds thoughts about the trip ahead. We had been here before (see May 2000) The path took us along some excellent slabs for beginning rock climbers. I didn't even look up as I realised I could walk up that slab with bare feet. The path next aims for the North ridge, which we consequently tackled. 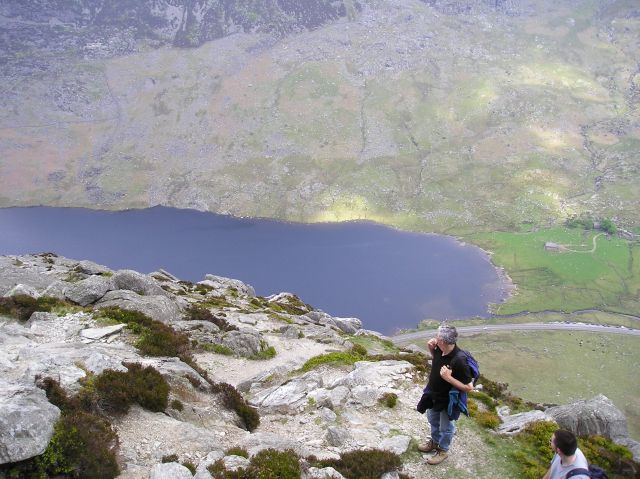 Llyn Ogwen in the deep distance

Soon we rose well above Llyn Ogwen and only my experience stopped my well experienced legs from shaking from the impressive drops in the oh so near background. The party spread well across ridge and for a while our Moroccan guide was hard to keep up with.

Then we came to the spot which they name "the cannon". The Welsh are a polite tribe as I would have given it a different name. James, as the Orthopaedic surgeon, immediately started to question how well the protruding rock was impacted (orthopaedic term for fixed) in the rest of Tryfan. The scientific approach was based upon gathering as many free bodies on the far end as possible. At the point of tipping over the exerted force could be calculate and an answer to the scientific question provided. When no more human bodies were prepared to risk their lifes,  the dog was send to join us. The dog quickly did some basic maths and came to the conclusion that the tip over point lay somewhere between between myself and Patrick. Her refused to join us. 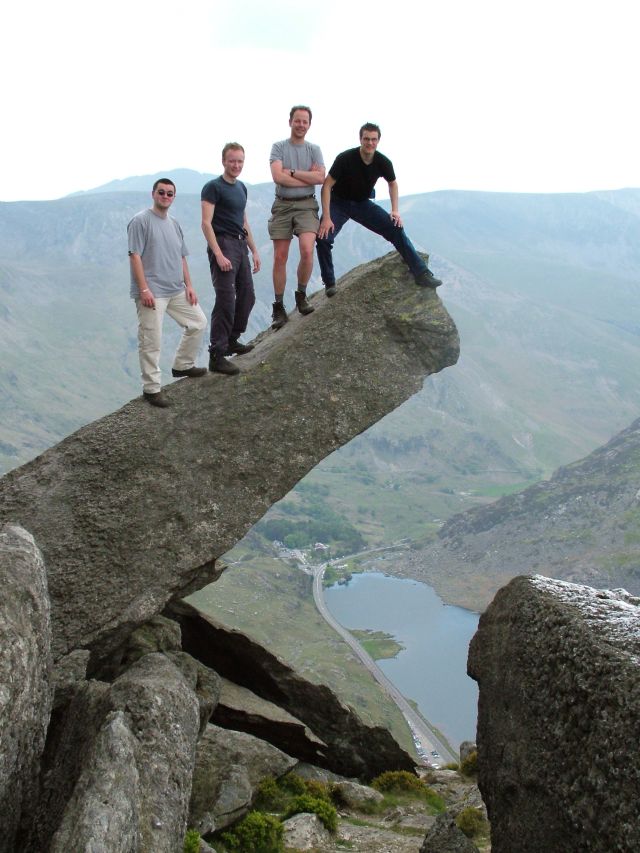 We continued to climb slowly and got near the first top. As the weather was dry, many people from below followed our route and it became rather busy at spots. 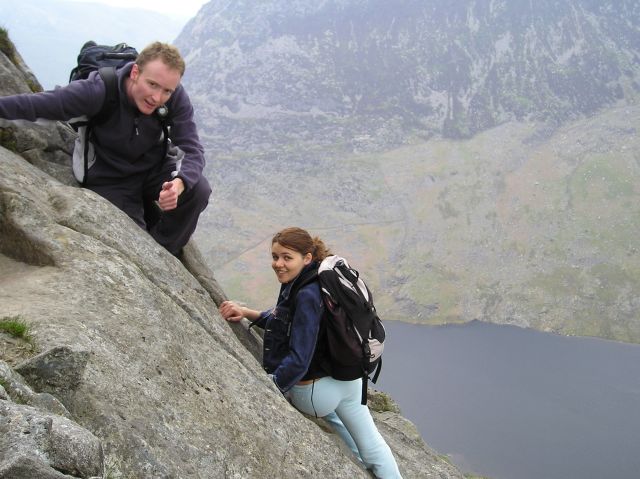 Eric and Fadwa living on the edge.

The middle top was occupied by Adam and Eve. It is said that he who dares to jump from Adam to Eve or vise versa is made a Freeman of Tryfan. The words "its only a small step for mankind but an horrible deep drop for if you miss it" came into my mind. 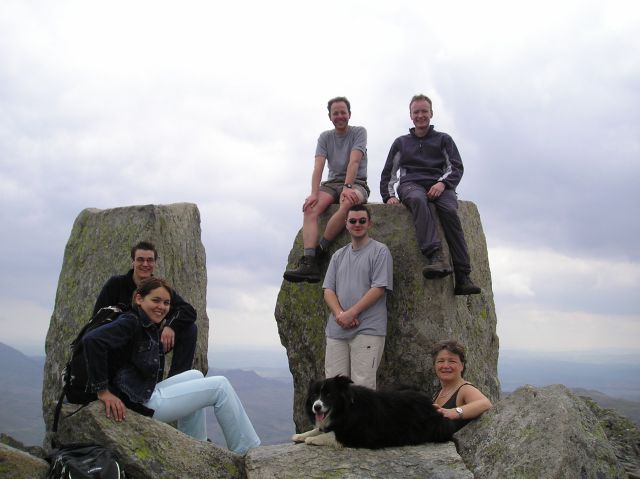 Group picture with Adam and Eve (Adam is the fat one)

Tryfans three tops were swamped by midgies and our lunch was plagued by hordes of the little bastards. All illegal migrants from the north clearly outnumbering us. Why does the BNP not take that up in their manifesto. They've got a dark skin, they have no voice (easy target), are clearly parasites in our society, and are flooding our borders. I might even joint he party and in the process elevate the parties shared intellect considerably. 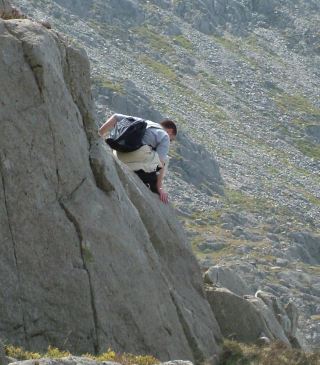 Sylvain getting the scramble bug

After a bit meditation our expedition gathered for the downhill part which always seems to follow the previous uphill part. We walked from the shoulder between Glydar Fach and Tryfan and turned West towards Llyn Idwall. It was now noticed that the quiet Sylvain, got more and more into rock climbing mood or mode and when I saw him wandering off towards Ireland, I thought we'd lost him. Eventually he came back.

James mentioned that usually someone is lost on these trips anyway. And yet, that it had to be Shauna, his wife, was not expected. At a point, we did some research in the falling of water down the rock face and Shauna wandered further down the track to stop and listen to the hard rock compilation tape she was enjoying (why the excuse of a course in Spanish is beyond me). The rest of us took a short cut to the car park and only my sharp experienced brain noticed that she wasn't with us. Well she wasn't with us anyway, listening tFadwa attempts the famous east face of Mnt Richardsono a rock tape, but we decided to search nevertheless. She was spotted on a sitting on a rock in the distance and only a very loud emergency whistle managed to pluck her our of her concentration.

No more walking incidents after that and we got back to the cars. 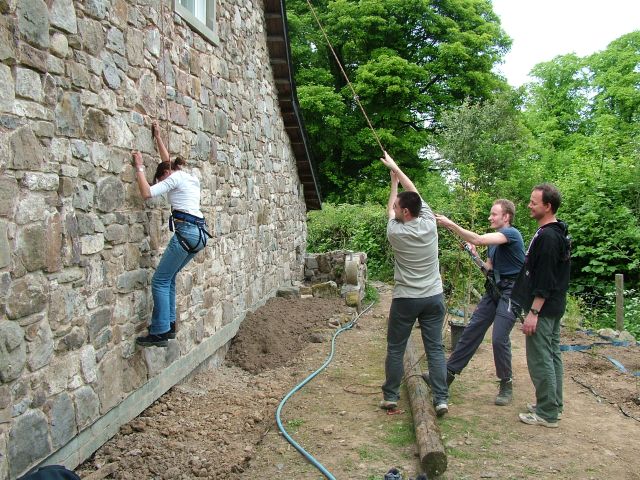 On the way back, when I was finally almost asleep, some car in front of us decided to turn off and I could just brake hard enough not to hit the driver in front of me. James, directly behind me, had similar problems. I was only told later that my little French car would loose badly from James's German engineered metal block. When Sylvain and I managed to pull Fadwa from the front window and put her back in the back seat from which she started the journey we were waved at from the right?? by another driver with even less braking talent. His handicapt hand only showed one finger, no wonder then. 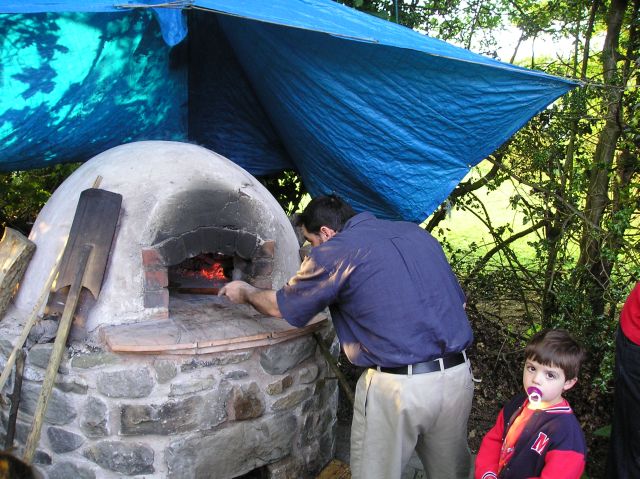 Back home the succesfull end of the expedition was celebrated by making real pizza in a real pizza oven. As the process takes time, we entertained ourselves by doing some more climbing on the south face of Mnt Richardson, which displayed a very odd climbing technique by Eric and Patrick, jo-joing up and down on a single rope.
Patrick and Eric's wall climb

After some volleyball with the dogs, rudely interrupted by a game of football, some excellent pizza followed. That why we do it...