This time we decided instead of walking on a beautiful mountain, to look at one. "But how do you do that?", I hear less experienced mountaineers thinking. Well, you need another mountain. Preferably same size and somewhere relatively nearby. The good thing is it does not necessarily need to be another impressive one, since we ran out of our supply on the last trip (see May 2000). 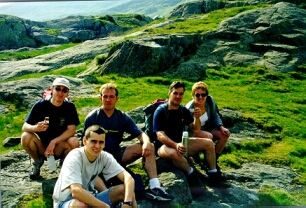 Rest before you start

So we aimed for Carnedd Dafydd, a sister mountain of Carnedd Llewelyn, which we did in April 1998. Even before we left the hospital, the mini-bus cassette player was brutally raided and a a cleverly compiled rock compilation tape, for which we searched so desperately on the last trip, lifted the dwindeling group moral early on.

Only some of the usual moaning sods found the 120dB AC/DC, Iron maiden, Motorhead a bit hard to stomach at 8:30 in the morning. "Where's me jumper, where's me jumper". 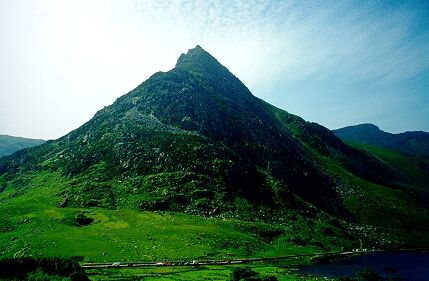 Tryfan from the Ogwen valley

The usual trip from Oswestry brought us to the foot of Gwern Gof Ucaf (Upper Swamp Smith???). Either my Welsh dictionary is crap or the there were in the past actually two smiths in this valley, since its neighbour farm is named Lower Swamp Smith. They must have repaired the only horse in the valley in turns I guess.

From the foot of Tryfan we followed the car free side of Llyn Ogwen to the edge where Llyn Ogwen uses gravity to empty itself into the valley towards the ever depressing place called Bethesda. Don't go there on a drizzly Sunday afternoon hunting for food. Prozac is expensive.

Following the ridge up, rather steeply, the view opens up rather quickly, towards Tryfan, Devils Kitchen and Anglesey, rather beautifully. We still disagree where the Devils Kitchen is. Some of us even think it is not at all in north Wales, but somewhere in the Orthopaedic Hospital in Oswestry 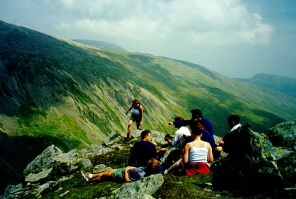 On the top of Pen Yr Ole Wen (978 m) we had a windy lunch and decided to follow the ridge towards the moonlike landscape of Carnedd Dafydd. We had another short brake in one of the stone wind shelters on the top and then went down the scree slopes towards Ffynnon Lloer (Moon fountain). Admittedly there is a small risk for a twisted ankle or dislocated knee, but we used the moon walking technique for a fast decent on the scree slopes. After all we work in an Orthopaedic Hospital. That made us get about 15 minutes before the female half of our party at the lake. Just enough time for a quick nudish skin dip. The water was at least minus 2 inches. 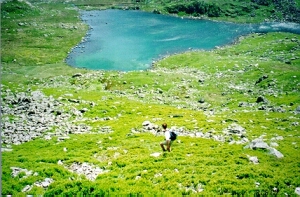 Called by higher purposes, some of us even practised walking accross the lake a as you can see for yourself on one of the pictures, were amazingly successful.

But the weather was glorious all day and while some of us enjoyed some more swimming, the RAF gave us free entertainment in their usual yellow helicopter with several low flying loops and fake landings. Some veteran members of our walking party got some nervous twitches in their face remembering mobile phones and Welsh mobilisation.

The last part of the trip took us down to lake Ogwen again, where my waterfall ski attempt ended in the muddy pool at the bottom. Need to practise some more.

The bus was still parked where we left it in the morning. We drove back surpisingly quickly considering the beautiful weather and the amount of tourists available. One thing that helps is that after more than 10 years, the road works a few miles east of Betwys Y Coed have finally been finisihed. Got money from the European Union which we all fear so much, except when Berlin or Paris decides to build our bridges or tarmac our roads. Sorry have to kick occasionally. Its in my blood.

Back in Oswestry, everything did not end in the usual meal at the Last Inn. Is this the first sign of decline of the Geoffria empire? Surely not.....