Never under estimate a Rhynogg, February 2003

As an interesting change of scenery, we chose to walk in the southern end of the Rhynoggs. In the morning El Geoffrey shocked us by almost abandoning the trip for himself in, due to a serious stomach disarrangement, but the years of hardship while guiding our group payed off, and he was persuaded to join us in the last minute. Knock on the head, bound and gagged inside the car boot added even more to his already broad experience. 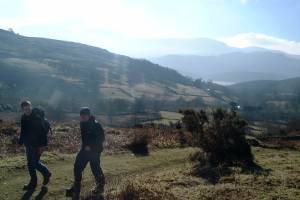 Geoff and Chris on the way up

Our starting point was Hendre Forion, a small farm just north of Bontddu. From there things went, as usual, uphill. At first it was a small farm track, but those usually stop, and this was no exception. The idea is then to follow the best sheep track, but that is not easy as experienced walkers will know. 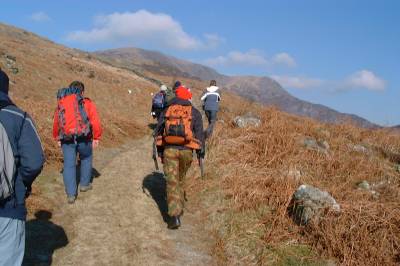 We stayed on the west side of Afon Cwm Llechen and climbed to east slope of Diffwys (750 msl). 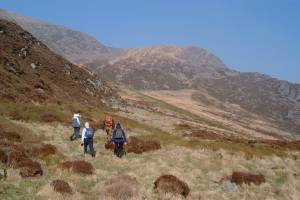 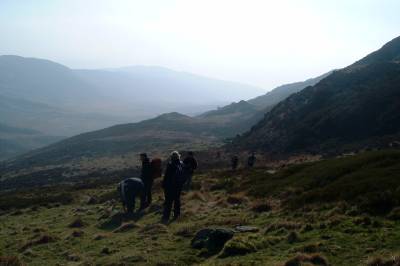 We found an old mining track and an impressive fault in the rock running straight up the mountain which had been the target of miners in the past. 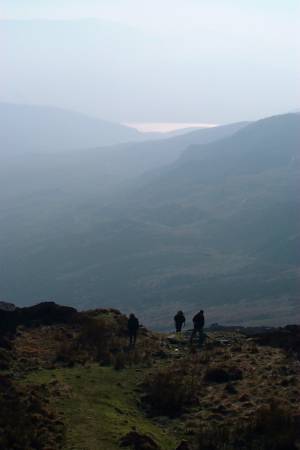 Once near the top a mythical Sphinx-like statue appeared and with a view south towards Cadair Idris, just visible in the haze, the whole scene breathed mysticism. Until Neil decided to have lunch on its nose. 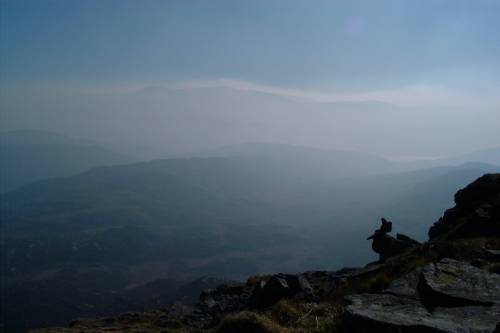 Cadair Idris in the haze

At the top we had a short rest on or just below the Great Welsh Wall, which is a forgotten defence work of impressive size against marauding sheep. Certainly not easy to take from a sheep point of view, with the loose stones on the top. 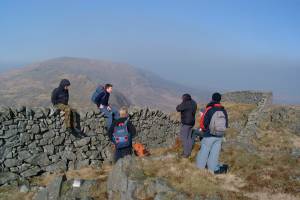 Lunch on the wall

We strolled down to some small frozen lakes just above Llyn Dullyn lake to test it. It passed the "walking across" test only just and not everywhere as Chris kindly tested for us. Some sliding games were performed to entertain those who remained high up on the Great Welsh Wall. 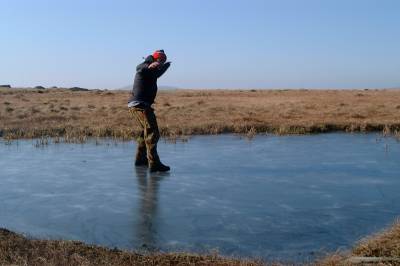 Geoffreys original target, Y Llethr, still appeared as far away as it was earlier in the morning, so we decided for a short cut...in the Rhynoggs... Ha. I was warned about 12 years ago by Chris Sharp that the when the Rhynoggs were build by the Welsh tribes, they embedded lots of trap holes in the ground to slow down the enemies progress. When they found out it hampered their own progress just as much they abandoned the area without the courtesy of filling the gaps up. And much of the Rhynoggs is still as dangerous as it was in ancient times. 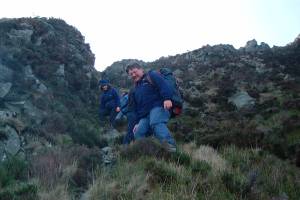 This meant that the easiest part of the following bit of the walk was the 60 degree slope down from the Crib Y Rhiw ridge. An new technique was developed by Chris and Neil to make down hill travelling more efficient. Chris Crawling is a form of travel in which the participant lies belly flat on the ground, face downhill, and uses swimming movements to propel downwards across the heather. For novices : it only works on heather under a slope of more than 60 degrees and preferably under 90. Grass with big rocks are to be avoided. I was clearly a novice. 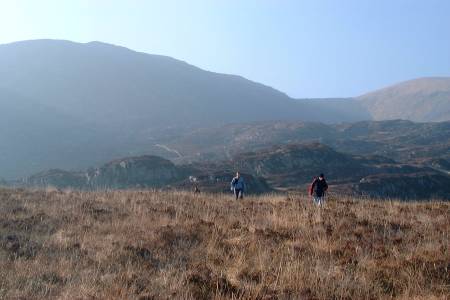 The levelish bit toward Hafod Y Brenhin was hard due to the very uneven ground and the group arrived slightly scattered on the forrestry track at the head of Cwm Mynach. We followed the track south on the eastern slopes of Mynydd Cwm Mynach through the forest. We crossed the ridge at Garth Gell back towards the cars. Some old mines with the railway tracks still inside were explored on the way down. Most feet were pretty sore by then. At the car a bathing ritual was performed by Neil and Giselle is the icy stream. We huddled near the cars waiting for their return and then drove back all the way to Os.