The point of nearly no return, March 2002

Occasionally you enter a walk that goes very nearly wrong (see Aberfalls, October 1999). This was such a very nearly walk. Wind was the chilling factor. Not so much at first, so let me start in the beginning.

In the beginning there was a big group that wanted to walk but quite near the day of going, the weather forecast must started to scare sense into most of the sensible participants. Only those who spend the Friday night in the pub or went to bed early turned up at the usual spot at the usual time. All 4 of us. Well actually 4 and dog. The brave guide dog with shortened legs. 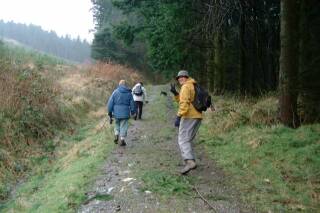 Still inside a sheltered forest

So, we drove up to Llandrillo, a little village on the west side of Cardair Bronwyn. Our chief navigator was studying the map to decide where we should turn left for the parking space. Now, honestly, the map showed a decent road turning left before the bridge and not after. After a short moment of hesitation, we turned into that road. 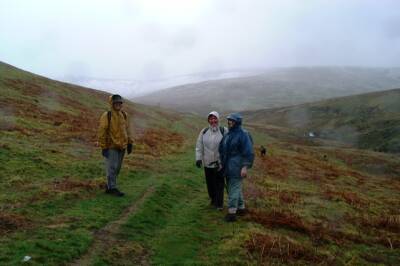 At the end of the road we ended in what was quite possibly a farmyard. But is was heavily camouflaged by many  layers of cow muck. It did leave very little room for turning. Although our little car had a reverse feature and a capable driver, it was simply not powerful enough to push through a ton of cow shit, despite the useful directions of the kind female farmer, dressed for the occasion in traditional Welsh farming gear.

All these silly adverts of Chelsey tractors driving through CGI generated landscapes in which the father takes the petrol guzzler through many hazzards to return his family to the safety of the city. This was the ideal setting where such a car could have played the hero, appealing in car adverts generations of traffic jammers. A missed opportunity. 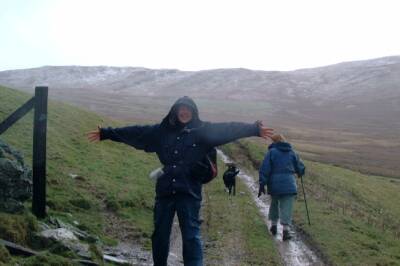 Still happy. Little did he know what was ahead.

Eventually, we managed to get back on the main road and found the right turning and a proper place to park at Ty Uchaf. Originally, we planned to walk up Moel Pierce (one of Cadair Browyns shoulders) and then, once we reached the top, would turn north, away from the wind. But my long experience of walking told me to start sheltered in the forest (Coed Y Glyn) and then, once we get out on the exposed moor land, anticipate the sudden weather improvement and under the typical Welsh blue sky, we will walk south to the top of Cadair Bronwyn (784 msl).

Most of my prediction was accurate. The only thing that I missed was weather turning he weather forecast about some snow on the higher grounds. 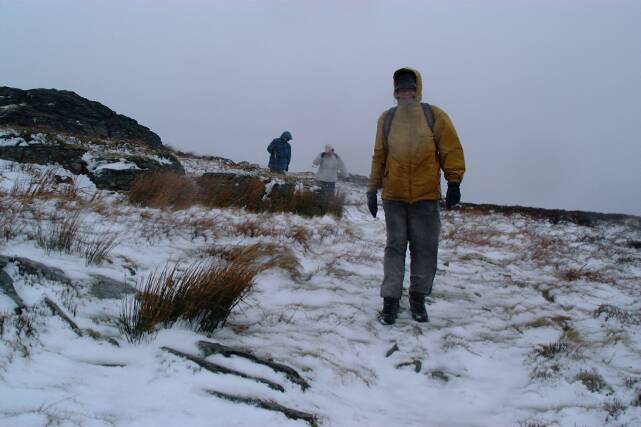 Once we reached the highest point were, at the memorial, the track goes down again to Llanarmon DC. This is where we trampled on the first snow and started to face the wind on our way to the top of Cadair Bronwyn. The wind was cold, but not very strong yet and some snow was falling to entertain us. I remember I felt exhilarated, walking through the fresh snow, and thinking about the weaker species that had reduced the numbers so much earlier that morning. 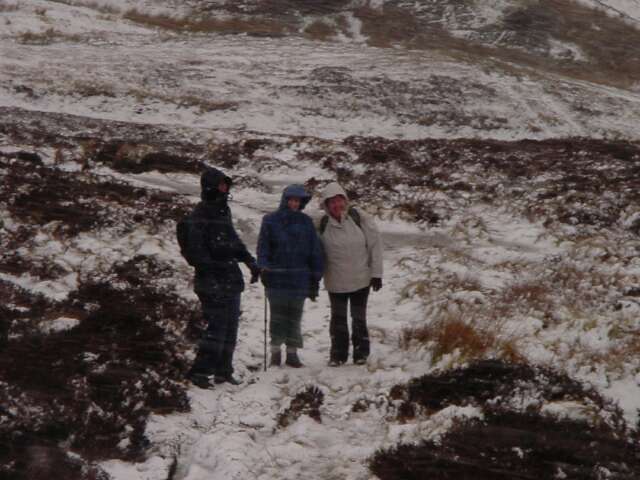 When the weather started to hit us (Frank, Shirley and Alex).

I also remember that most of my exhilaration blew away very quickly with the freezing wind, when we reached the top. The guide dog made a dash for the only bit of shelter behind a single rock. I think we should have seen that as a sign. It curled itself up in a way that it looked as if it had reached its final destination. I wandered how you carry a frozen dog down the mountain and how to overcome incompatibilities during mouth on mouth re-animation. In the mean time, I noticed that my very wet coat was rock hard, which is usually a indication that temperatures have dropped below zero. 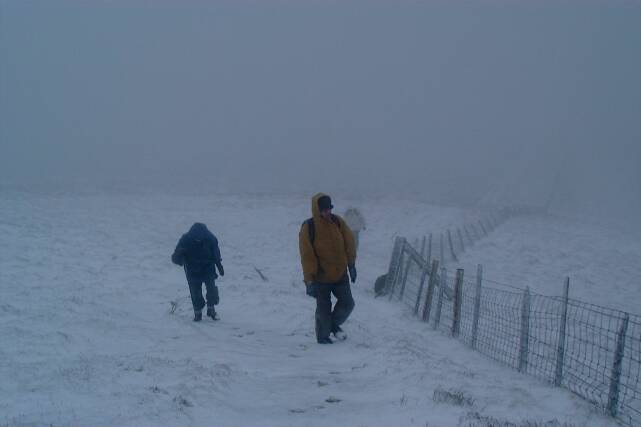 So it was time to go down again. The plan was to walk to the saddle between Cadair Bronwyn and Cadair Berwyn and then turn right (against the wind) and follow the ridge down to our car. In the mean time, as a side dish, we would visit a stone age stone circle. It was not to be.

The wind increased strength to a level that if you dared o jump, you would probably touch the ground again somewhere near Hull. We didn't dump. A better technique was to hold on to a wooden pole, kindly put in the ground by the Welsh tourist board for this purpose. But due to the freezing temperatures, some urgency was needed to get to a form of shelter before we would turn into some sort of ice statue, leaving evidence of a horribly gone wrong polar training expedition for Scott/Shackleton type of trip. 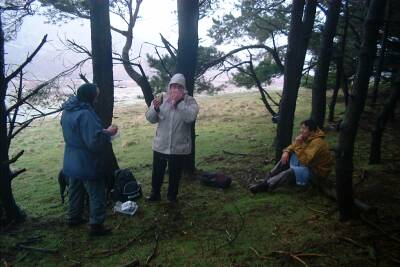 We reached a lonely patch of forest, well away from the planned track and on the way to the totally wrong valley, but nobody cared. After enjoying a small drop of tea and sandwiches, we managed to get blood flowing into the most essential parts of our body and continued across the empty moorland. Funny, very few walkers around. 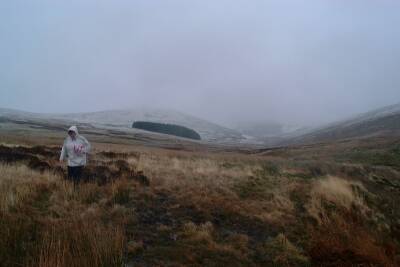 Looking back on Cadair Bronwyn

The ground on the north side of the Clochnant stream was very wet and path difficult to follow. At the top of the valley, we followed a farming road down to Cadwst and Llandrillo. From there we followed the main road back to the car. Funnily enough, the sun came out as soon as we reached the bottom of the valley. So my prediction was right.

Just got the timing wrong.