Plans are made to be changed. Our plan was to climb Tryfan, probably the most impressive mountain in the Ogwen valley. So we set out on the usual Saturday morning, in the usual mini-bus, with the usual bunch of slim people. Some of them very slim indeed. On the way up we had some differences about the music, and the driver had to risk the lives of his passengers several times by jumping into petrol stations on the way in search of a rock band compilation tape. 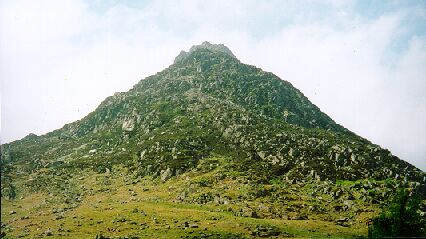 Anyway, the mini-bus was parked at the foot of Tryfan, and we took the path leading up to the north edge of the impressive mountain ridge. Just before the real climb started we made the tactical decision to split our troops up and attack the mountain from both north and south side at the same time, so it could not escape. Within no time we noticed that we were on the wrong track and a new course (cross mountain) was set out to correct the problem.

A nice feature of Tryfan is that you can take the easy way (hey, what is easy if you are walking uphill) or the hard way. There are lots of climbing opportunities which we gladly challenged. There are some jumping opportunities too, with only a small margin for error. No problem, we knew the number of the RAF rescue helicopter from previous trips (see October previous year). Some of the rocks were sticking out like big phallus symbols, and without wanting to dive into the psychology of it, I had to climb onto one of them. Looking down from there, you start to appreciate that they don't need any Viagra to stay upright.

To Phallus or not to phallus (the canon)

We also had a rare sighting of a local French rock-crawler, an ancient animal who's sole purpose is to hang upside down from a rock. One of the first species was imported from France in the late nineteen-nineties.

The top was near, and we got there ready for lunch and Adam and Eve. Adam and Eve are two rocks near each other and you can jump from the one to the other easily if you know how to stop in time to avoid an early and rather quick return to the mini-bus. 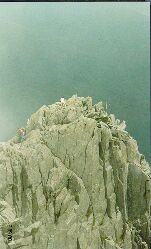 Near the top of Tryfan

We had lunch at the top and at the same time the party which challenged the south slope arrived. Its a small Wales after all. Since my flask with coffee broke on the way up when the door of the minibus was kindly opened by the French Tour operator in one our attempts to gain a rock band compilation tape, I was pretty low on water at this stage.

At this point we had the choice to go, as planned, down to the lake full of lovely fresh water below, or to go up the dry slopes of Glydar Fach, to build character. I hate Keith. I followed him. But after a hard climb, on which we only temporarily lost two members who could not resist the rocks, we got to the top, covered in sun penetrated clouds, creating a beautiful surreal effect.Then again, it could be a side effect of de-hydration. But the outlook on a quick decent to that sparkling lake made up for the effort. That is, until it was decided that Glyder Fawr was only 3 miles ahead and we might as well do that one in the same run. I really hate Keith. It is, admittedly, a fairly easy walk from Glyder Fach to Glyder Fawr, with on our right hand side a semi-circular drop filled with clouds, giving the impression of being on top of a volcano. Three mountains on one day made us realise that we quickly run out of mountains to climb in Wales, and we therefore have to be more strict on future trips. We now consider to put in a vote of confidence in our slim organiser, due to the lack of long term view.

From Glydar Fawr, we walked back the southern edge of Glydar Fach, where we split up again into two parties. Keith and El-slim-supremo, followed a ridge, the rest of us followed a gully, both leading to the lake below. Halfway down a well was discovered and like 4 leaches, we stuck to that dripping wall of rock, to fill our water bottles. Quite refreshing, but also an interesting experiment to see how healthy Welsh mountain water is.

On the edge of the volcano

We met up again at the lake, where Keith and El-Slim-Supremo were halfway a nap, waiting for us. We went down together to the mini-bus were the rest of the party was waiting for us. Twasn't difficult to drive back home but the trip was a bit boring without a decent rock band compilation tape. We ended up, as usual in the Last Inn, Hengoed, for a good meal. Mjam, mjam, mjam, mjam.