The Cnichts of the round table, December 2001

Cnicht was on my list of mountains to visit for a long time and on this cold December morning it was destined to be crossed out. Some say, it looks like the Swiss Matterhorn, but some have obviously never been to Switzerland. Cnicht (Welsh for Knight) is a lonely mountain top and most impressive when approached from the South. The drive through the narrow roads of the Croessor valley alone was worth the visit. 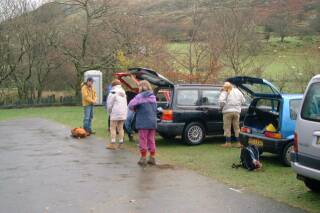 We parked on the central car park in the village centre. It struck me straight away that Croessor has, for a Welsh village, an unfair amount of luxury facilities in the form of central car park, swimming pool, church, school, and (dismantled) railway. That is almost one swimming pool per head. Obviously they got friendly with somebody in a high position in the European parlement.

Cnicht in view with a half frozen Meryl on my back

Anyway, on this still dry sunny morning, we took the path to get on Cnichts shoulder. From there on you just follow the ridge to the top and try to ignore the incoming rain clouds as long as you can. 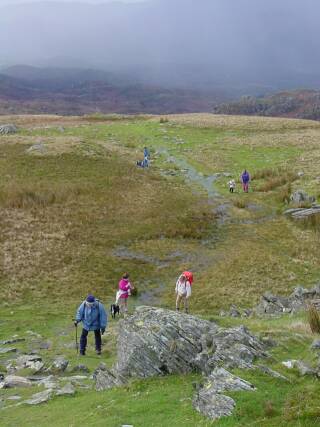 The picture above shows some of us preparing for the incoming rain and other carry on regardless. The weather turned nasty for a bit and even though we dragged the youngest member up via a rope (to limit her choice of direction), she started to complain about the weather (foreign breed) and mother and daughter decided to turn back to seek shelter in a small car. The more sturdy amongst us carried on and between the clouds the views were very impressive indeed. All the land towards Porthmadog was flooded with globally warmed rain. 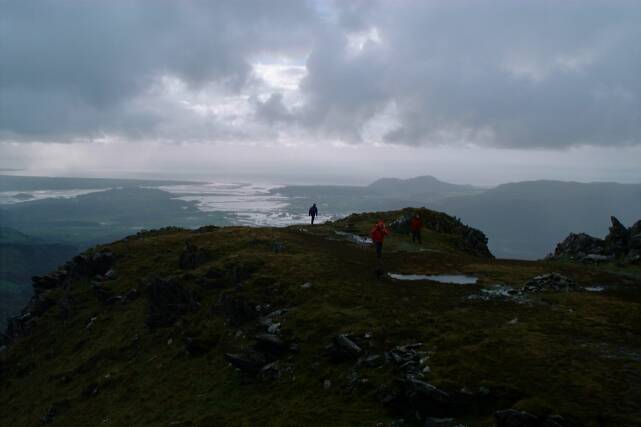 View towards a flooded Porthmadog

Near the top another rip in the group cohesion developed, and only the very sturdy weather hardened amongst us carried on regardless. A short stay on the top allowed us to take the traditional pictures as evidence for those who didn't make it.. At this point the author himself decided to turn back in attempt to catch up with his family members and left our Japanese photographer responsible for the remainder of the pictures 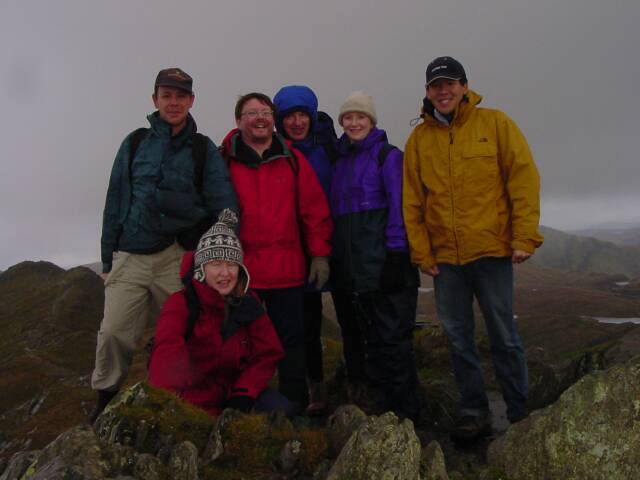 Evidence of party reaching the top

From the top it is possible to make a very nice round tour. The rest of the party followed Cnicht down on its north slopes and turned east to the desolate (ex) slate mining area between Cnicht and Moelwyn Mawr.

A view towards the coast and the Rhinnogs

The round trip ended with the descend on the west slope of Moelwyn Mawr back into the valley of Croessor (Cwm Croessor). After the return to the cars, we all went back individually. We did manage however to visit my favourite pub in Carrog to enjoy a meal. A slight drawback was that the pub was overcrowded with pheasants in traditional hunting gear with the smell and stains of freshly shot hunters hanging around. Or maybe the other way round. I always mix up which party carries shotguns with difficult-to-miss-after-a-pint-or-two 500 hail stone cartridges. 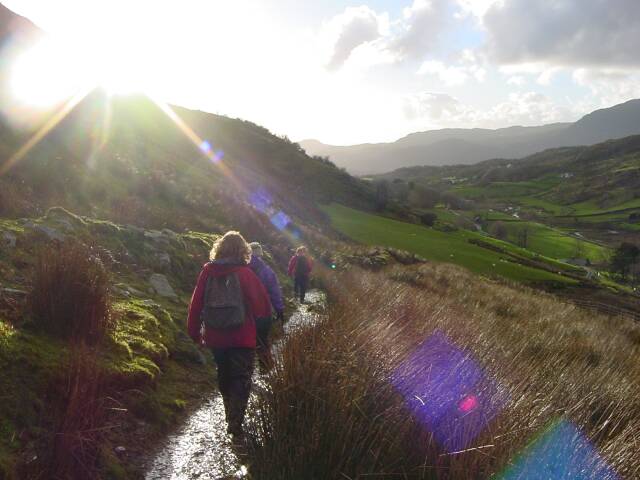