The tops of Europe

Travel stories have to start somewhere. Mine started at Gobowen station, a tiny place on the border of Wales, with two platforms, cleverly build on either side of the track. "There is life there Jim, but not as we know it". The announcement that the train was late was preceded by an anti terrorist warning. "Any luggage left unattended will be removed and possibly be destroyed by the security forces" beamed the speaker. My lower jaw hit the platform. I couldn't believe I was the only one laughing of the waiting customers.

Maybe there is a picking order in the international world of terrorist. Lower class terros (diminutive) can start by aiming little aeroplanes at Gobowen station and once that target is destroyed successfully, a career seeking terrorist can move up to more significant targets. 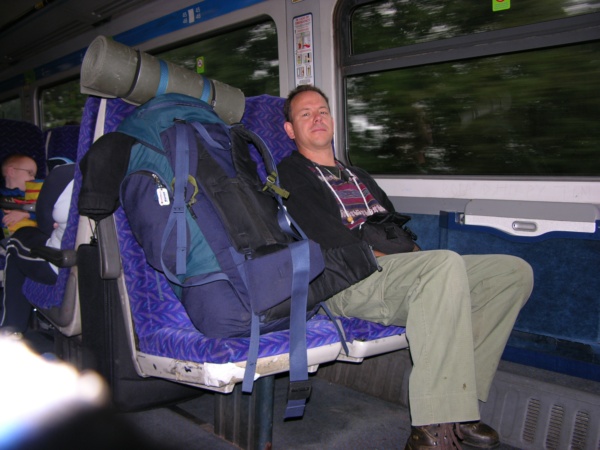 The train trip from Gobowen to Bristol

Only we, citizens, who are not into designing anti terrorist warnings, know that the only danger in Gobowen is the utterly bored youth, who one evening, a few years ago, kicked our car doors in and deflated 3 tires on another occasion. But then the the Gobowen anti-terrorist squad was nowhere to be seen. Since we follow George$$, the world has gone completely mad...

So I was on the way to Bristol, to take a flight to Bilbao on the North coast of Spain. At the Bristol airport a very keen customs officer detected my very large camping knife in the top of my backpack.

So, this to you aspiring terrorists out there, now you know what to say when you want to destroy Gobowen station. Did I mention the world is mad, as I saw Swiss army knifes on sale in the duty free shop?

Bilbao is a busy industrial city, where currently an unbelievable amount of building work is going on. They have pedestrianised most of the inner city, got busses, trams and metro and one simple electronic card system that works on all. Not bad.

About 4 hours were available to me to find us a room for the night, then I had to rush back to the airport to pick up Tomoki, who was still on his way from Japan. Before I left I had found a modern youth-hostel (Albergue Aterpetxea) on the web and printed a map. It is a 2km walk from the airport bus drop off point to the hostel.

Limited knowledge of Spanish is a slight handicap in Spain, and the lady at the reception of the youth-hostel clearly needed some kind of secret Spanish password to get her into help-tourist-mode. Obviously all Spanish people know this word. I didn't. I waited politely for 2 minutes, but as she kept typing her email, I let out a quiet "ahem". "You wait" was the response, in English. Ok...I had still 3.5 hours left before Tomoki would arrive, but it did put some Welsh hospitality experiences in place. 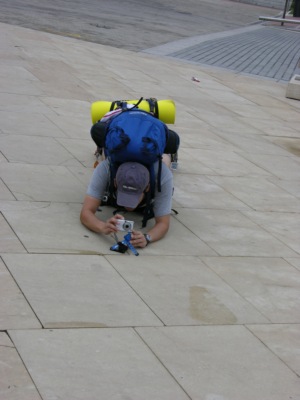 Back at the airport, exactly on time, Tomoki arrived, which is amazing, considering the distance he had travelled. If you travel east to west in the UK, you'd be lucky to get the day of your arrival right. We left the airport by taxi, who's driver I think was trying to tell us that is was cheaper to take a taxi to the Picos that night then to stay in a hotel in Bilbao. Considering that the bus ticket from airport to the Hostel cost me €1.1 and he charged us € 22 for the same 8km, combined with the Picos being about 250 km away, we kindly declined. The hostel was only €15 per person per night, including breakfast.

For you Brits out there, a Spanish breakfast is a fraction of a proper British one and it does explain the high density of pleasantly shaped Spanish women. Two slices of bread and an apple.

When breakfast was finished , we walked to the main bus station, only a short walk from the youth hostel. A return trip with Alsa to the Picos cost about €15. As the bus left at 11:00 we had about an hour to kill and we took the tram to the Guggenheimer museum, which stands out beautifully when you come over the river from the airport. 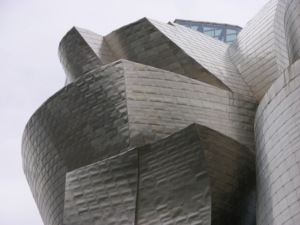 Right: View on the Guggenheimer museum

Once on the bus it was a long and boring trip to San Vincente de Cabrales. Motorways are never very scenic.

From San Vincente we got the bus to Potes, which left only 10 minutes after we were dropped off. Potes is a nice touristy town on the eastern edge of the Picos. The weather cleared up and we enjoyed an exiting bus trip through a terribly narrow gorge with equally sized buses coming from the opposite direction. Getting better in Spanish now, we made out the the next and last bus would take us to Fuente Dé at eight o'clock in the evening. So, we had 6 hours to kill. And when they were killed we found out that the bus in question ran only in the main season. Oh ... bugger. Well, it wouldn't be the last time we would be waiting for something that wasn't going to be there... 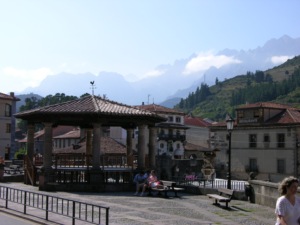 Potes with a view on the eastern Picos

So, 10 minutes later we were on the roadside hitch hiking the last 20 km. After 30 minutes traffic passing us, we thought we'd never get there, but then a very nice father and son (that's how I gathered the family situation) took us all the way up to Fuente Dé, picking his wife up half way, and dropping us way beyond where they had to go.

The camping in Fuente Dé is beautiful. Shaded between trees, views directly on the rock faces more than 1000 meters up, and a beautiful reception-bar-shop-shower house. 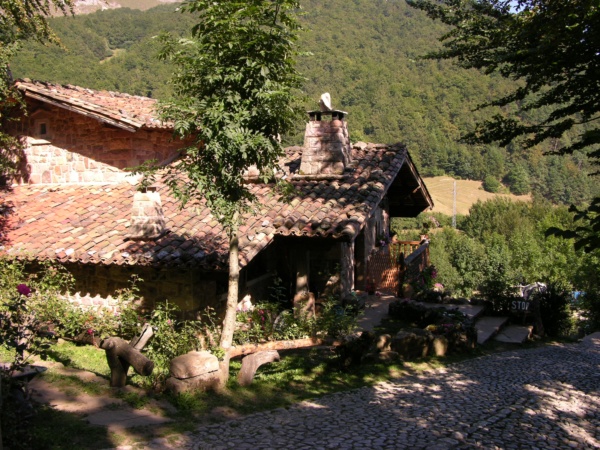 Fuente Dé camping and the morning after

Next day started cloudy and we had decided for a get-used-to-the-bloody-mountain-boots trip. When we found out that the cable cart ,going 900 meters up, was only €6 we jumped in and 10 minutes later crossed through the clouds, rising above where an amazing view opened up. 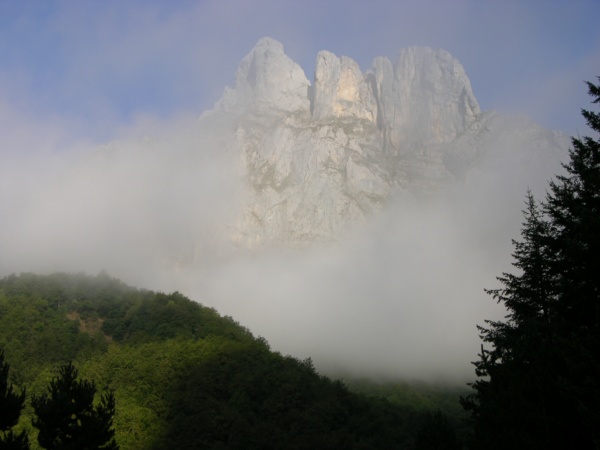 Cable cart taking us through the clouds

From the top station, a small path took us of the main track running west towards Pico de la Padlorna (2314 msl). It seemed an easy walk which would take us on a great loop back to the valley. The terrain became very barren, and reminded me of a place named the Barren in West Ireland, with the difference that the rocks there ran horizontally there. Here they were almost vertical. I slipped once, and a piece of rock cut straight through my hand. Very sharp indeed.

With sun beaming on top of us and being well above 2000 meters, the 1 litre of water I carried ran quickly low. We had lunch Colladina de las Nieves (2224 msl) and found our way down to Vega de Liordes. A very kind mountaineer filled my water bottle up, before we started to drop down the 900 meters back to Fuente Dé. Above us Griffon vultures were circling around. Was it a sign ? Finally down at the camping we put our feet in the fountain (fuente in Spanish). The next day we would start our real trip with a real weight on the shoulders. 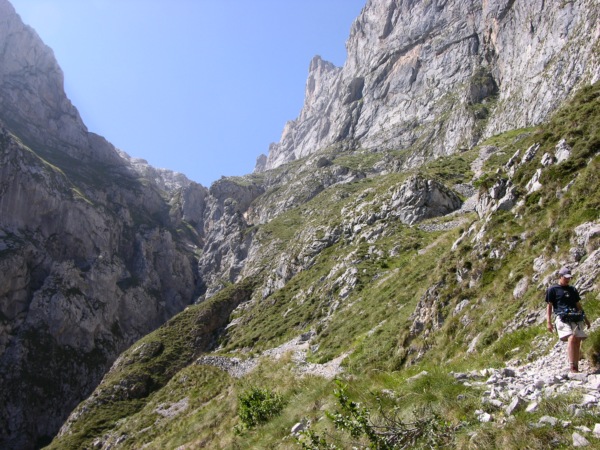 Coming down to Fuente De from Vega de Liordes

The next morning the weather pattern repeated itself : the valley clouded and the cable cart took us well above. The top station can be reached by 4x4 guzzlers and initially a wide path took us on the long dusty path toward refuge Veronica. We walked in the shadow of a huge rock face which some climbers were challenging. 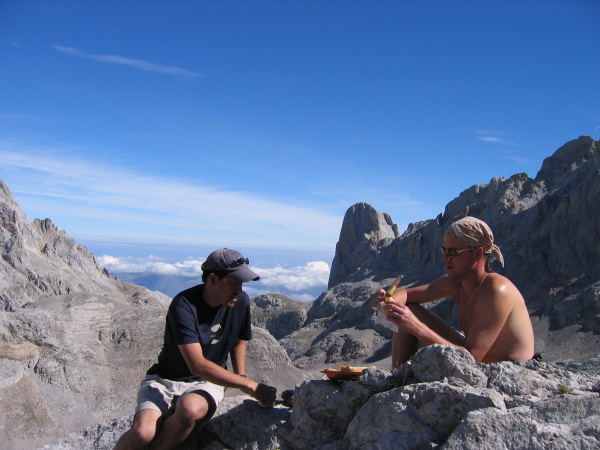 Lunch at the highest point looking towards Picu Urriellu

We had to climb about 440 meters to Horcados Rojos (2343 msl) and then drop down into Hoyo de los Boches. As 'boche' was a French term for Germans during WWI, I freely translated it into the "hole of the Germans". The German hole took us back down again to 2096 msl. .

It was a big hole indeed and we had to drop down steeply (steel cables were very welcome). We climbed out of the German hole only to drop down in the next sink hole Jou sin Tierre (hole without earth). Once out of that hole we had our final destination in view, the famous Refugio J Delgado Ubeda at the foot of Picu Urriellu (Naranje de Bulnes 2519 msl) which had been climbed for the first time exactly 100 years ago.

It is a magnificent rock, sticking 600 meters straight up from the Refugio at its foot. It is also the location of a well, and after walking for 2 days in the Pico you realise how dependent life is on water. Many people camped outside the hut and there was entertainment provided by the many parties climbing the rock face and some Australians trying to set up a bungalow sized tent. It was a matter of queuing up at the well outside the refuge for a wash. 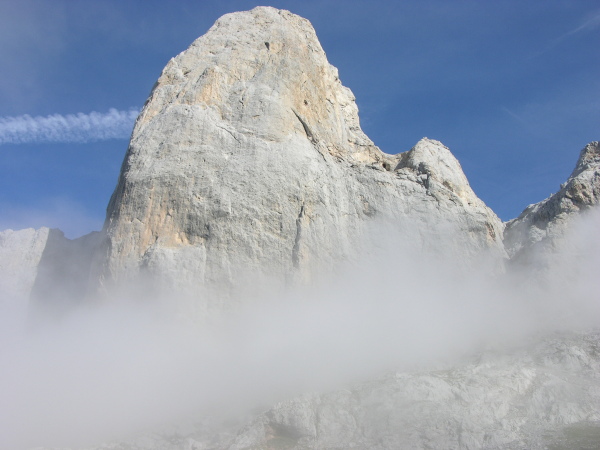 Picu Urriellu with clouds drifting past

When the sun was setting clouds came in and drifted past. We cooked our meal and and settled early.