Since the last expedition in 1997, with Jacob and Eddie, probably nobody had made an successful attempt to traverse Crib Goch and reach the top of Mnt. Snowdon (1085 msl or 3557 fsl). This is why a seconds expedition was launched, and dispite dreadful warnings in advance, 13 people showed up on Saturday morning, ready to sacrifice their lifes for glory. Our mini bus was parked at the bottom of the Llanberis pass, since the top car park is always full these days and the driver thought he was not skilfull enough the turn the thing anywhere between the top of the pass and Dublin. 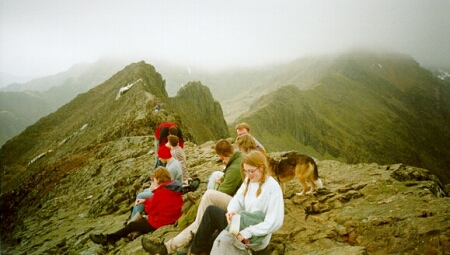 At the Llanberis pass, the expedition was strenghtened by two extra experienced fell walkers from London, who happened to be in the area. The Pyg Track was easy and brought us quickly up to the foot of Crib Goch. Here, fear or common sense finally caught some of us and therefore the expedition split up. One group would follow Pyg Track up to the top of Snowdon. The remaining nine were still happy to die, and whoever managed to ban this possibility out of his or her mind, was happily remembered by our ever optimistic tour operator Etienne: "YOU ARE GOING TO DIE".

We soon reached the edge of the ridge and had short lunch break to enjoy the view. From this point Crib Goch runs almost horizontally towards Snowdon, and those who did not yet suffer from fear of height had plenty of opportunity to catch up. Slowly but surely we battled ourselves closer to Mnt Snowdon, and not even Retro Patellar Chondrositis could stop us.

Through little patches of snow, we reached the point where the two mountains are happily married together and from there we followed the easy route to the top of Mnt. Snowdon. For the time we were in the clouds, but as luck would have it, soon after we reached the top, the view opened up dramatically and we were impressed by a sun covered yellow brown landscape as far as we could see.

This was certainly something to ring home about, and that was exactly what happened all around us. In our direct vincinity, we saw at least 17 people on their mobile phones using the official guidelines. I imagine a conversation goes like this:

We quickly decided to leave the top, the culture shock was too great since the 1997 expedition, and the other half of the expedition wasn't found. They either all had died horribly on Pyg Track or got tired of waiting for us and had inside knowledge of the pub opening times in the valley. 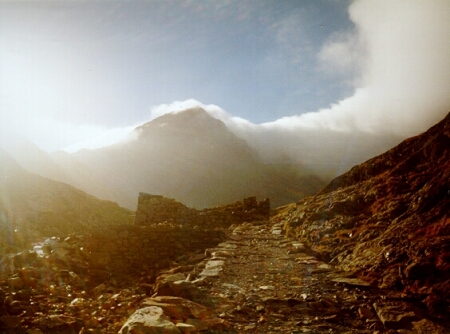 View on Snowdon from Miners Track

We followed Pyg Track down to the start of the Miners track at the top lake. We took a rest at the lake and some of us explored an old mine, which ran for a few 100 yards inside the mountain. Others decided to take a mud bath or go for a swim and strain their knee in the process. Its what you do in life. The run along the lakes on the Miners Track is a long one, but the sun was kind on us. We finally caught up with the rest of the expedition who were waiting outside??? the pub near the mini bus. The guest members of the party were given a lift back to their base camp on the other side of the Llanberis pass, asking the utmost of the drivers skill not to knock any of the stone wall down on either side of the narrow road.

Since it was too late to bring the mini bus back to the garage where it was rented, we went to the Last Inn straight away and ordered the usual "simple but nutritious meals, celebrating the fact that 13 - 13 is zero deceased