On a wintery day in February, another day trip was organised to visit Arenig Fawr (847m), close to Bala. The day did start well when the driver of the mini bus (who doesn't want to be named in order not to damage any remaining trust in his driving capabilities) found out that the word mini is not really appropriate. Especially while taking corners where big bolders mark the hard shoulder. It resulted in a flat tyre.

Now, this raised the question of "How many Dutchmen does one need to replace a tyre?" Well about 7, mainly because nobody expected that British wheel bolts tighten the other way round as opposed to the rest of the world. 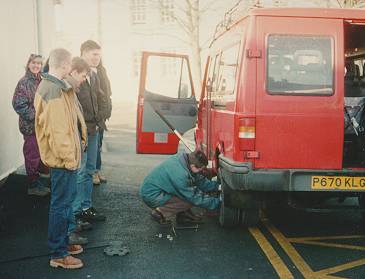 We drove to Bala and followed a little road to the north slopes of the mountain. There, we all set off, when the hail stopped, to a lake at the bottom of the Arenig Fawr. Here we split up into two groups, one going down with the van into Bala to eat roasted chicken, the other group testing skin resistance to hailstone blasting.

The way up was improvised but quite sheltered of the harsh wind. That changed when we reached the plateau on the top. As soon as the small stubborn weather hardened group reached the top, it became impressed by the view and the strong winds. 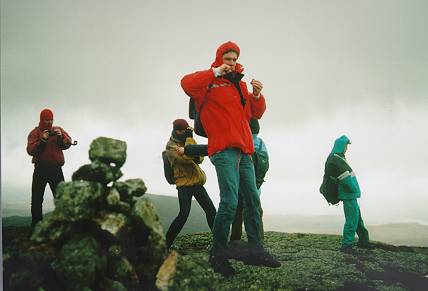 Hailstone blasting on the top

Funny enough, nobody was in the mood after such hard work for a long picnic, and we quickly descended back into the valley to seek the comfort of a pub. The comfort of mobile phones arranged the mini bus to pick us up again.

The pub, on the way back, was found in Carrog on the river Dee. Carrog has a beautiful village pub with view over the Dee valley, where they have the unknown custom of serving Guinness sprinkled with about 7 iron nails, which give it that special flavour.