A meal with a view

17th September, the train up and long decent to the Monta Rosa hutte

This was the big day. A train would take us up to the Gornergrat (3090 msl.) from where we would descent. As Tomoki had explained Japanese are early risers and so it was that I was the only non-Asian on our train. I hate foreigners. 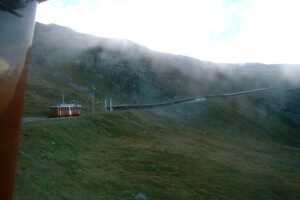 We had a peaceful breakfast on top of the Gornergrat after being harassed by an aggressive “professional” photographer when attempting to stroke a St. Bernard doggy, specially trained to milk money from tourist. Time to move on. Funnily enough, 100 yards from the top the we were the only travelers.

A slight misinterpretation of the map forced us to descend 600 meters before we could get to the glacier which we had to cross to get to the Monta Rosa Hütte. 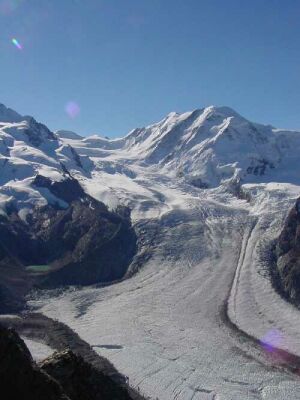 The Grenz glacier and the Monta Rosa hutte.

After a long descend we came to the glacier and we simply had to follow the orange flag poles to find our way safely across. Halfway the glacier we had to cross a moraine and the path followed with the help of a footbridge onto the next glacier. One appreciates that glaciers move slowly here. 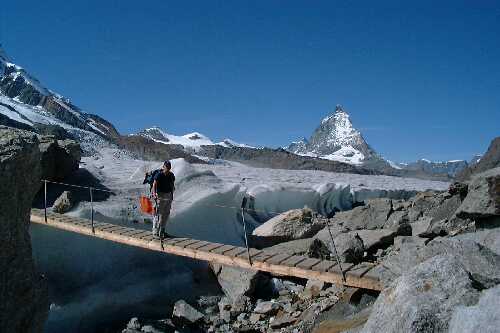 A bridge provides the crossing between the Gorner and the Grenz glacier.

Once off the glacier, a steep oxygen depleted climb followed to take us to the hut where we were received with the now customary Swiss politeness when we entered apparently through the wrong door and were sent out again without any information of where to go instead. Only later in the evening we found out where to sleep.

While it was still light we decided to go for a walk and climbed to the Grenz glacier at roughly 3000 msl.. We then took on the task to reshape the landscape for future tourist but as you can see from the picture below, that was not easy. Back at the hut we cooked a lovely meal with view on the Gornergrat glacier. 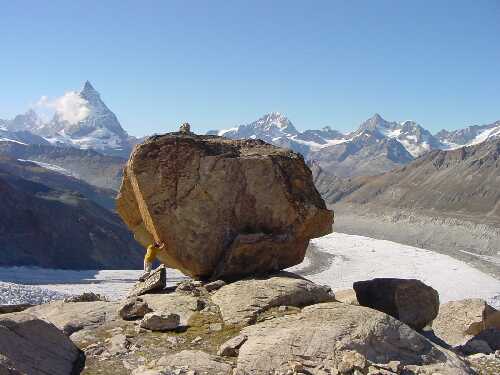 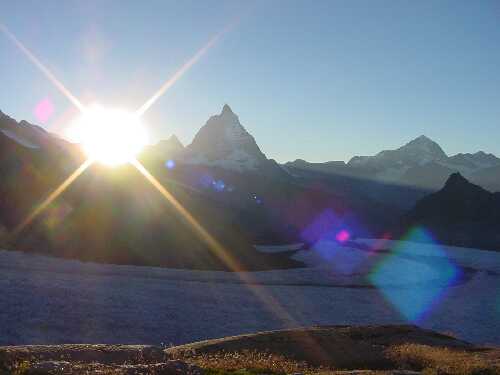 We were treated on a most glorious sunset.

In the morning we did have breakfast in the hut and then washed in the frozen drink tray outside to proof the we were real men. Also because the hut did not have running water and a bottle of half a liter costs about 4 Swiss francs. 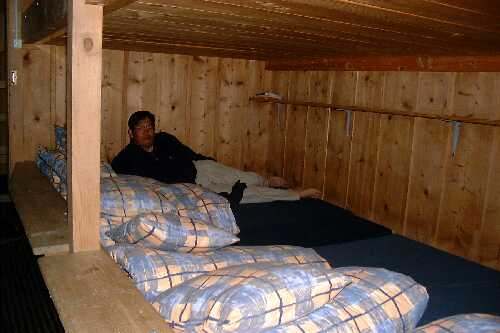 As we then found out lack of oxygen also causes lack of sleep. We were not the only people restless that night, and at various stages during the night, groups of climbers left anyway to get even higher up the next day. Not a very good night rest then.

The previous day | next day.