As I had a few days leave left of my 2 week break and Conwy visits were rare this summer, we headed for the boat. Arriving in Conwy at 16:00 we quickly got a BBQ on the go. After some shopping we had a good time playing on the guitar (Timo) and harmonica (Frank) while singing to the Beatles. Timo is suffering from a late bout of Beatlemania and plays nothing but the Beatles at the moment. Interesting how you learn to re-appreciate their music it even though Abbey Road was probably my most played LP at the time in my old bedroom.

The BBQ heat died quite quickly, so our BBQ was extended by the local frying pan. 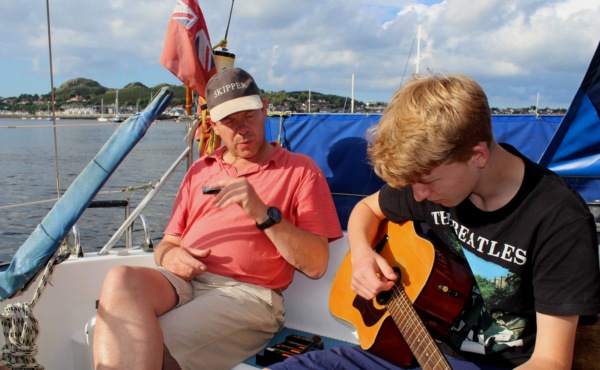 At 20:00 we set off for an evening sail and we were back on the mooring an hour and a half later. Time for coffee.

Now it was time to have a good sail. We left the pontoon at 10:00 and wind depending we would head North into the North Deep or into Conwy Channel. With a good wind from the NNW we headed just about through the channel, cutting Scabs short, as there was enough water under the keel. Also because a much bigger boat went ahead of us. Only after following him, it occurred to me that he might have a lifting keel. 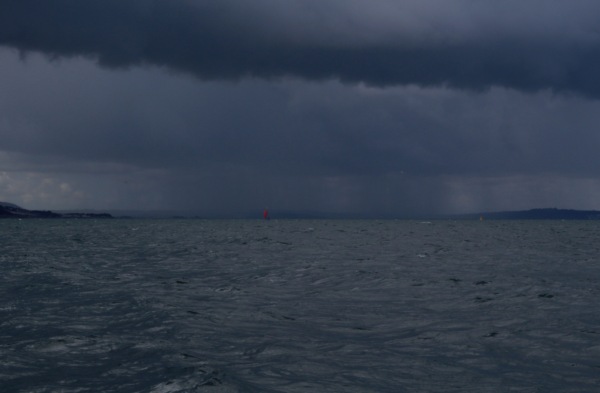 Bob with Comrades under the dark clouds

We saw Bob sailing North of Conwy sands going much faster than us while we were close to the wind. The wind was a good F4. We turned around near Fairway and had a cracking sail back. Bob catch nearly up with us but then seemed to lose speed suddenly. At 12:50 we were back on the mooring after 12.7 NM and 6.4 kts max. 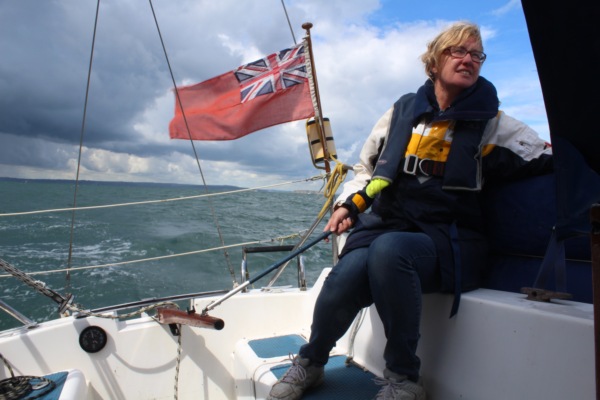 Geke heading back at 6kts

Next we enjoyed a good lunch with bacon and eggs (it was meant to be breakfast but the 10:00 cast off put that off).

Entering Conwy on a bumpy sea