The mermaid and the blackbird

It was a year ago that I went out sailing with Geoffrey and Neil. It just happened that Keith, a good friend from the same group of friends, who all left me for better places back in 2001/2002, but I am over that now, was in the area. Neil was camping with his son Luke on Shell Island and also keen to go sailing. We met up in Conwy on Saturday morning.

After some quick shopping to ensure we had enough food to avoid fights in the next 2 days, we were ready to set off for Red Wharf bay on Anglesey. At 12:20 we cast off. 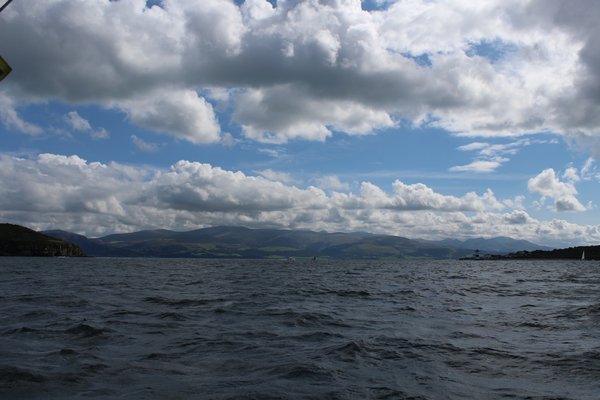 Looking back towards the Puffin sound and Snowdonia

There were light winds forecasted from variyng directions. It varied indeed from the NW to NW, i.e. nearly head on all the way. We managed to raise the mainsail and could just reach South of Puffin. We tacked through Puffin sound where the seas became choppy. The next tack set us towards Red Wharf bay. The engine was kept running as the time window to get into Red Wharf bay would start to close around half tide. 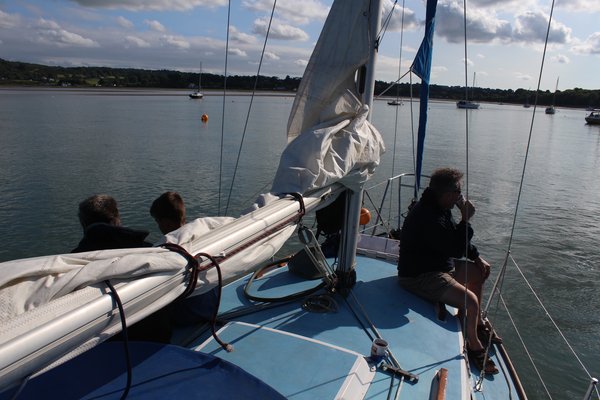 Waiting for the tide to go out

Close to Castell Mawr Rock, we found the entrance into the narrow channel that leads to the pool, a mooring area near the Ship Inn. Another boat overtook us while we carefully navigated into the channel and he offered to point to an unused mooring. We kindly took up the offer. We had 1.1 m minimum water at a tide of 5.8m and 1h 40m after HW. This means you need to be in before half tide. We covered 16.8 NM in 4 hours.

After that it was waiting for the tide to go out. 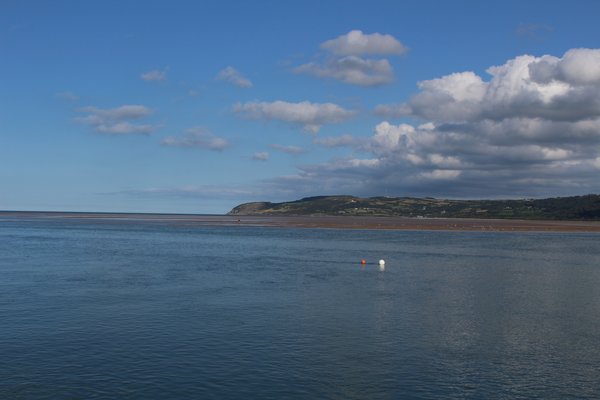 Mermaid rising up from the sea (just below the headland)

As I looked towards the sea, I suddenly saw what appeared a woman to be walking on a sand plate that just dried out minutes before. The nearest dry land is close to 2 km away. Therefore the only sensible explanation could be that this was a mermaid who had just come out of the sea. Hah, that will beat those stories from fellow sailors who send me videos of pods of dolphins and porpoises swimming around their yachts.

The remaining 3 men on the boat suddenly shared my interest and she was followed professionally by Keith with binoculars for a while.

When the tide was low enough we went to the Ship Inn for some refreshments. The mermaid turned up (muddy feet and all) and Neil tried to persuade her to have a drink with us. She declined under a cover story of being from the Czech Republic (yeah right, so no local links) and she had to go back (yeah right, I bet she could not dry out too much). 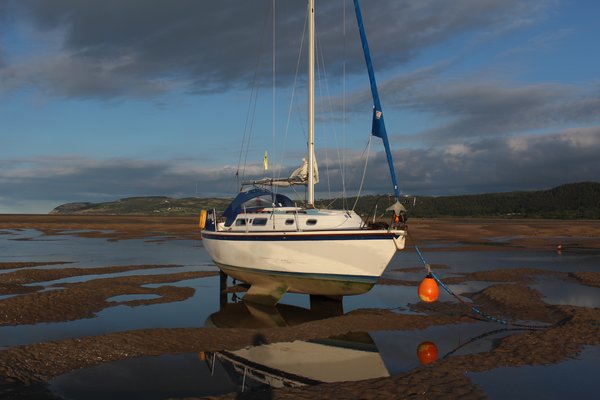 The sun setting on Anyway

After a few more drinks we all pottered around the pools left by the tide fore a while. Then, without having had a proper lunch, it was time to cook. Luke took out his guitar and entertained us with an impressive version of Paul McCartneys Blackbird. In fact, Luke entertained us the whole way with various songs. Neil and Luke also played together. 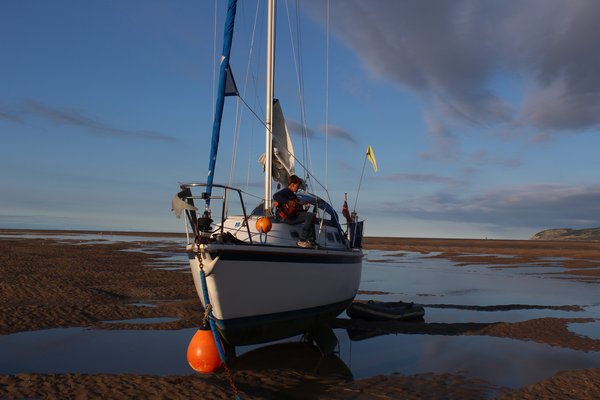 After a nice meal we settled down for the evening. I did some calculations to see what time we would be afloat the next day. The forecast was for strong winds on Monday, so I had made the plan to return on Sunday to Conwy.

So we would float somewhere before 13:15. Forecast West backing SW F3/4.

Keith woke up early morning to enjoy the sunrise, which was a bit watery. Next time we sort of woke it was sort of nine. Keith and I walked to the shore and enjoyed a strong coffee at the local bistro. After that we walked around Castle Rock, climbing, as usual, over a fence that said "No Entry" as that could only mean somebody has to hide something that is waiting to be discovered. We discovered the dump site of the local builder.

After the walk we had a late brunch with eggs, bacon, ham and pasta sauce left over. Next we prepared the boat for the way back. The tide came in rapidly and started to float around 12:45 in 4.6m of tide. So much for the calculations then as the starting assumption of 5m needed to float was wrong. We set off early, which is alway better than setting off late.

We set off, out through the channel with the depth gauge screaming most of the way. With a good F4 from the SW, we had for once a favourable wind and crossed the width of Red Wharf bay at 6.5 kts. The 13:50 forecast confirmed F3./4 from SW with F5/6 later. 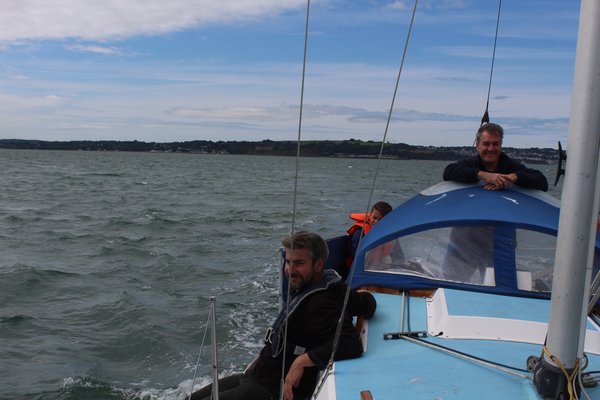 We made great progress and passed just North of Puffin island to do a bit of seal watching. There were at least 20+ boats hovering around the small island and all the privacy conscience seals had left for a more secluded spot.

We arrived 1h before HW at Fairway, ahead of schedule, so we tacked around for a while to be educated in advanced sailing. Luke was great and seemed to enjoy the sailing very much. Once on our way back to Conwy we had one gybe, which was part of the training to explain the potential devastating effect when it happens unexpectedly (this happened more or less unexpectedly but I managed to hide this from the crew).

Neil and Luke set off for home in the evening.

We (Keith) woke up late at 10:00. Leisurely we had breakfast and then, when trying to do the dishes we discovered there was no more water. A quick calculation told me we would only be able to get to the fuel jetty after 13:45, so we had plenty of time. 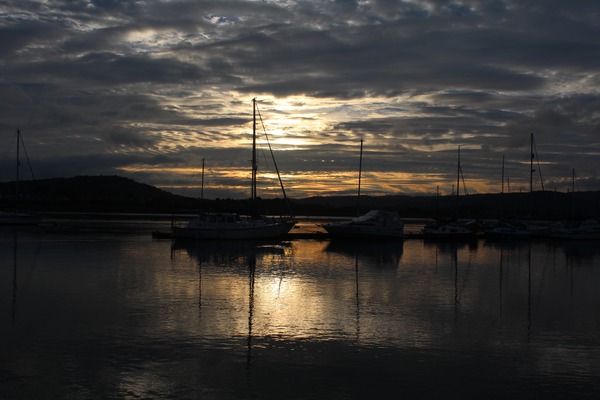 After several double expressos we had a nice walk over the castle walls, to return to the boat and motor to the fuel jetty. The far spot was taken by someone doing repairs on their boat and I landed perfectly with the current only to get told off by a Boris Johnson look alike, that had to approach against the current. I could have, if he wasn't blocking the spot.

We filled up with water and as we were leaving in a complicated backward manouvre that only experienced skippers will try, we could enjoy the harbour master telling the fuel jetty blocking party to move up. Ah. Life is sweet sometimes.