Opportunities to get to Conwy was seriously limited this year. My windvane had disintegrated in 2019, but more importantly, so had the VHF antenna. That meant my sponsoring of RLNI would potentially be a waste of money. A new one was required and an electronic wind speed reading in the cockpit would definitely be desirable.

I felt that working in the top of the mast, on a rope ladder was always going to be tricky until the moment I had found a way to grow a 3rd hand. Hanging precariously 10 meters above a glassfible deck, while practising a circus act of balancing a hand held drill, spanners, nuts and bolts with the greedy sea happily below to gobble each item and the clown up during the performance wasn't appealing. 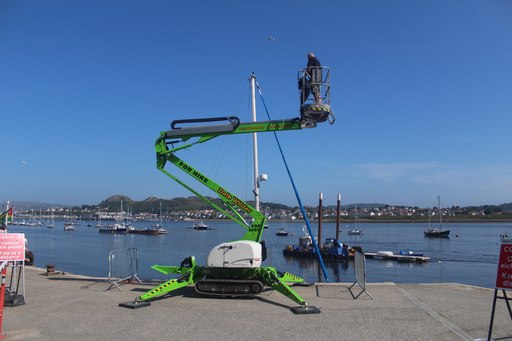 Cherry picker being demonstrated by its owner

Then the lightbulb moment came. Why not dry out next to the harbour wall. Dry ground is much less wobbly than water I had calculated. Also with the water gone, the boat has nothing to float on and settles elegantly down 4 meters below on top of a bed of smelly  mussels. The 10 meter mast, I deduced, would consequently shrink to a 6 meter metal pole with an inferiority complex for the duration of the water following the mood of the moon (more commonly referred to as the tide). 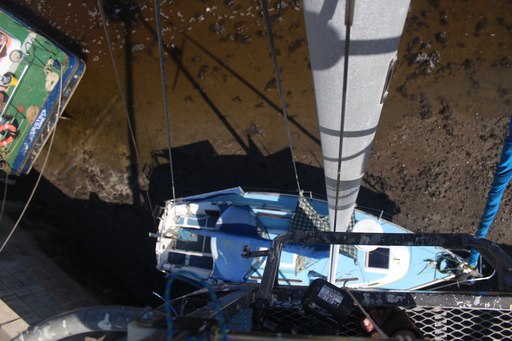 The hire of a cherry picker was about £150 for an afternoon. A marina lift out is £150 one way, i.e. twice as expensive. Cost and the lack of circus experience made it an easy choice.

Two little gates on either side (see top picture) provided an impassable barrier for the wider public, meeting the health and safety requirements, and the clown was ready for the show. An eager crowd walked desinterested below. 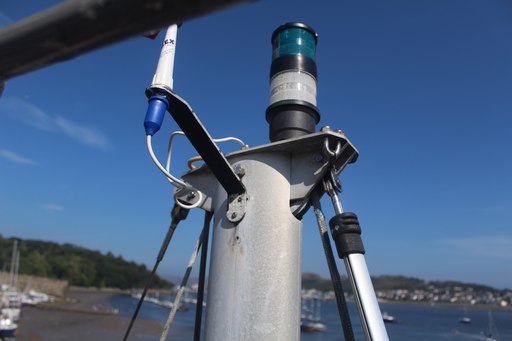 The existing VHF arm was in a good state and re-used for the new antenna. Further I replaced the light bulbs in the top lights. It would start to work for the 1st time since we bought the boat in 2012. 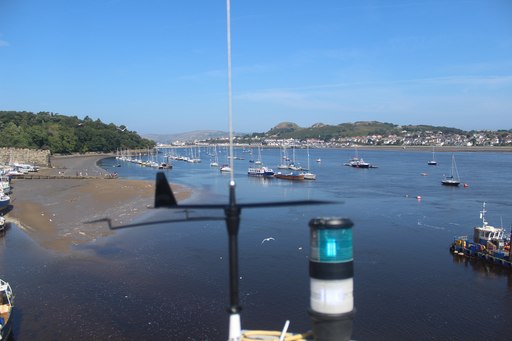 Harbour view from the top of the mast

The work was completed in 2 hours, the cherry picker folded on top of itself by manipulating a variety of levers in the well remembered opposite direction as when going up. Altought I realised it would add drastically to the dramatic effects of the show, I left testing the point where the construction would topple over into the Conwy mud for the next time. 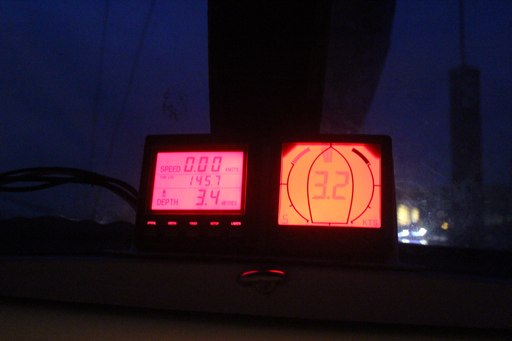 The depth gauge and new wind speed indicator at night

I further added some small cleats (too small some would say, but not me as I miscalculated them) to help with the mooring process against harbour walls.
The total value of the boat, at the end of this productive day, must have gone up with at least several dubloons and other captains could now be expected to nod respectfully when we sail next into an expensive marina. That's why we do it.