On the tail of a happy birthday wish, a plan was born to go sailing for a couple of days with with Ronald, a friend from the days that we volunteered to creatively annoy our Dutch secondary school Physics teacher. KOK.....LAZEROP still rings in my head, but I am digressing.

Due to bad weather, his flight was re-scheduled to arrive late Friday night. I got to Conwy on Friday evening and moored the boat up to the quays and sat down waiting and slowly nodding off into a deep concentration to work out the upcoming sailing plan. Zzzzz. 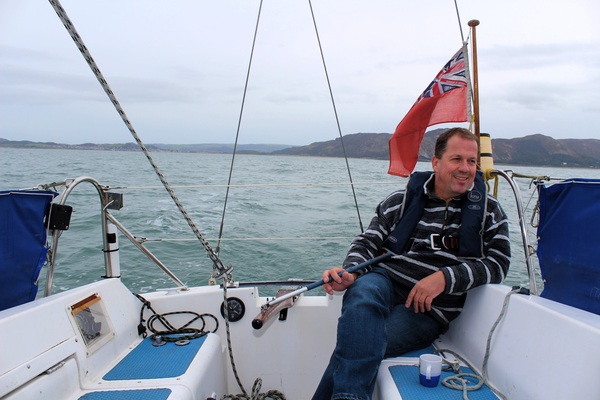 Just after midnight my concentration was disturbed by the boat repeatedly hitting the stone quays wall. So I woke up and thought it would be good to move the boat slightly forward out of the current. It was obviously pitch dark and I was looking up at large wet stone wall with the tide going out. I went up the ladder and when I undid the mooring lines, the current sucked the boat away from the stone wall. As I was about to fasten the bowline in the dark, I noticed a dark stone ledge down below, which only appears when the boat is about to dry out. This was an accurate assessment of the state of the tide and my timing of the boat wasn't optimal: Anyway had grounded about 1.5 meter from the lower end of the stainless steel ladder, leaving a wide gap to jump.

The result was that it was going to be fairly difficult to get back on board. A large jump just landed me on board and I next I made the opposite journey with a line between my teeth in order to fix a zip line that would at least create some hold while transferring Ronald's gear into the boat. Adding excessive grow hormones in cow feed and ending up in the Dutch milk has had its effect on the Dutch population and comes in handy at times. The draw back is the make up required each morning to get rid of my black and white Frisian skin tone. 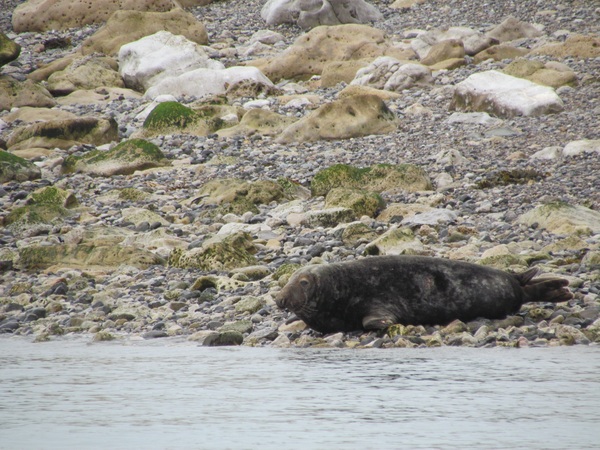 Just after midnight Ronald arrived and was forced to risk his life even before we had raised a single sail. At least he had a good introduction what he was in for. For the next 2 hours we concentrated, with the assistance of a bottle of wine, on a lengthy catching up session.

We were afloat again at 09:00 and after a good breakfast we cast off at 10:15. No wind. Out in the bay however, there was enough wind for sailing and the engine was switched off at 11:00. The plan was to sail around Puffin and head towards Beaumaris. However, after 1 hour the wind dropped and we decided the call the help of the engine. The engine thought otherwise and refused to start. The usual trick of rotating the engine by hand, which seems to make some kind of electrical contact from the start engine back to the battery negative. However, the usual trick decided not work. To moor under sail power in Beaumaris might be a bit tricky between all the moored yachts, but sailing through the Swellies would be out. 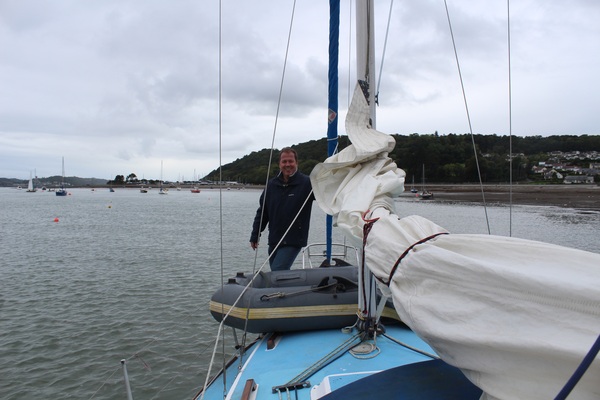 So we sailed back to Conwy briefly, until the I convinced the engine that burning diesel was not such a bad idea. So we turned around again towards Puffin. Near the South tip of Puffin we engaged in seal watching, but with no harpoons on board, we decided to get the evening meal in Beaumaris and proceeded in that general direction. Halfway we took some pictures of the old working sheds of Saunders-Roe flying boats, history dating back to the 2nd WW.

We picked up a mooring in Beaumaris and rowed ashore for a few drinks in the local pub and a wander around at Gallows Point.

Panic after breakfast... As we set off, the current appeared to be with us already and I expected the opposite. The plan was to go through the Swellies which is normally done at HW slack. Only after slack we expected a following current all the way to Caernarfon, so this was alarmingly early, usually caused by a miscalculation.

While heading towards the Swellies the tide calculations were repeated but no error could be found. The Swellies are notorious and unforgiving when taken on anything other than slack (Beaumaris Life Boat). 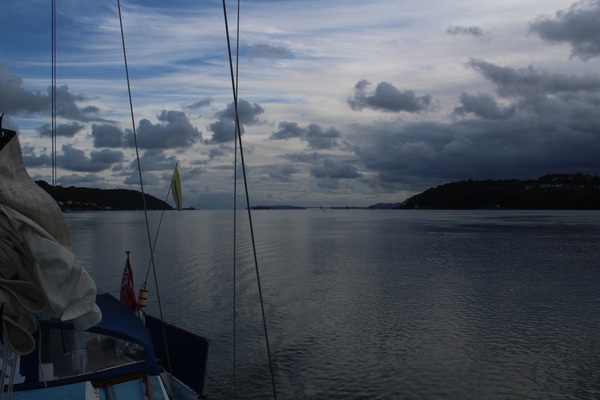 Heading towards Menai and looking back towards Bangor

The tides in the Menai Straits are complex where slack does not coincide with the usual high water. It coincides with the current going around the North of Anglesey cancelling the current flowing through the straits, coming from Caernarfon. In the Straits, after HW slack, the tide still rises for a considerable time.

The result was that we sailed from a following current into slack water and then into a slight flow against us within 30 minutes.

We saw 1 other sailing boat heading in our direction, which leads to two possible scenarios:

Close the the Menai bridge, it appeared to be scenario 2 was ours. 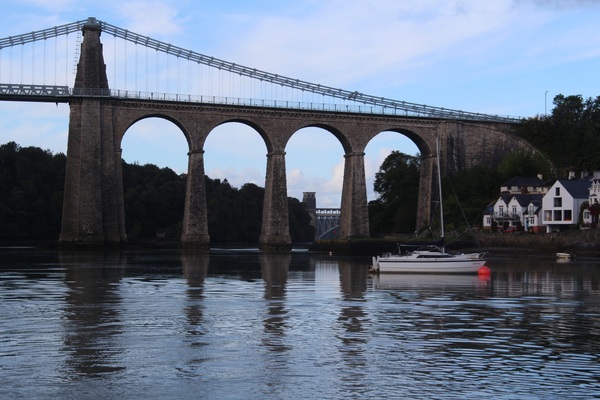 Menai bridge with Britannia bridge in the distance.

We navigated through the stunningly beautiful Swellies on towards Caernafon. 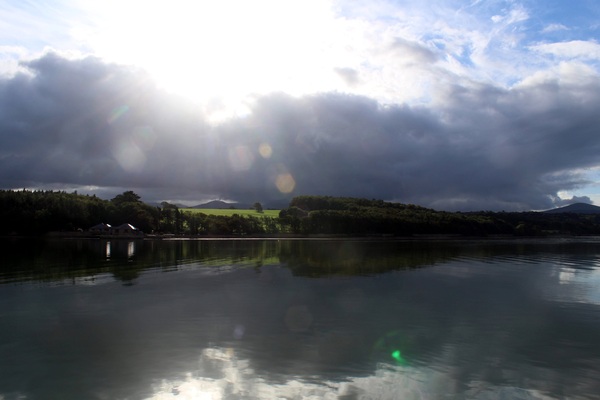 The shoreline opposite of Plas Newydd

All was peaceful with a light wind from the North. Not the forecasted F5/6 from the NW. But as we came to see repeatedly, the Welsh weather likes to have a lie in and then wake up with revenge in mind.

At about 10:00, within 10 minutes, the wind increased from a force 2 to a force 5. "All hands on deck. Prepare to reeeeeeeeef" shouted the skipper and while Ronald relaxed on the tiller, the remaining crew (i.e. the skipper) rushed forwards to do the hard work. 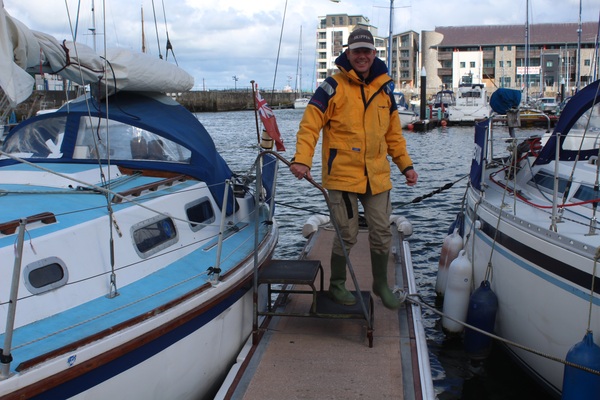 In Victoria dock with luxurious steps to leave the boat

We sailed out to Abermenai and then headed back against a 2.5 knot current. We called Victoria dock harbour master on VHF and he gave us a mooring location. Ronald moored perfectly. It was time to head into Caernarfon. Local web cam. 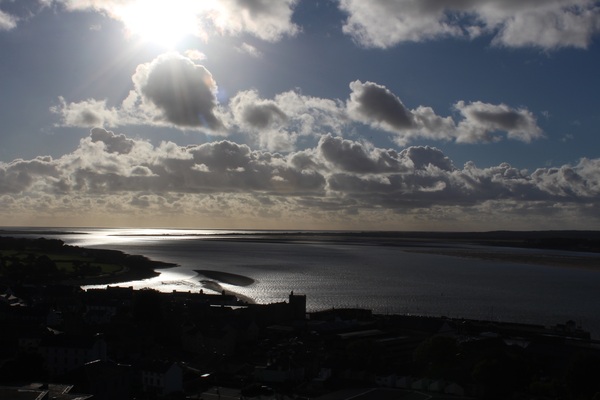 Looking out towards Abermenai over Caernarfon

After a walk along the town wall, a view on the old harbour we settled for a pint and a meal at the Black Boy Inn. After that we climbed up the small hill behind the dock to have a magnificent view over Caernarfon, the Straits and surrounding mountain range.

In the evening we discussed plans where to head next but the forecast was a strong wind from SW and time was relatively short. Heading out over the Caernarfon bar did not seem like a good plan. Therefore we would sail around to Abermenai and then head towards Port Dinorwic. A short trip.

Monday 24th of September (a view on the Aldi carpark)

I had never been to Port Dinorwic and it has locks. "Anyway" had never been through locks since we've sailed her so that was an interesting challenge. The locks would close about 12:40 due to the receding tides. 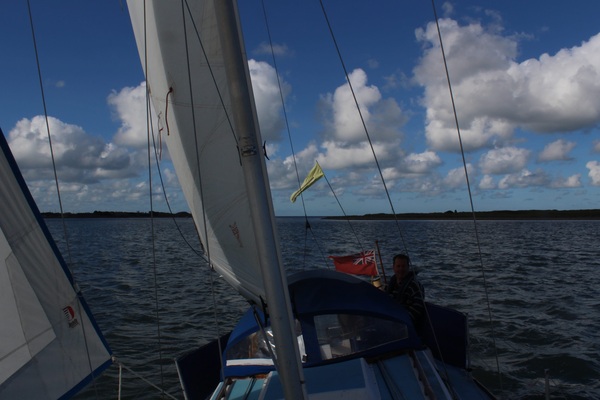 We cast off and sailed towards Belan Point with the current against us. After a short peek at the fort we turned around and I noted how quickly the current changes. We had a 2 kts current to fight. There was little wind and making Dinorwic before the tide was too far out would be a challenge. 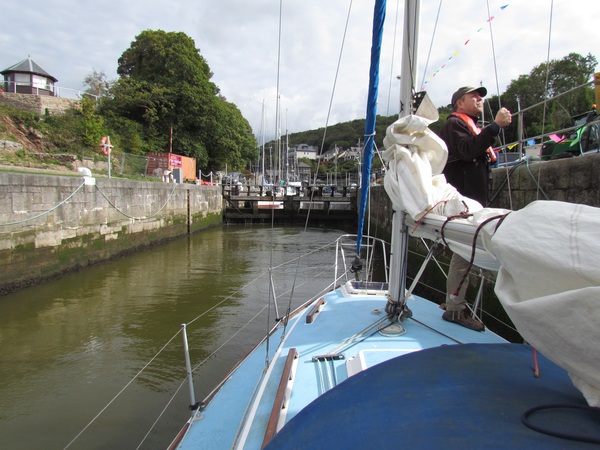 We sailed very slowly past Caernarfon and on the far side stared at the Aldi carpark for what looked like 1 hour. We called in the engine for more assistance and slowly made progress towards our goal. We swerved the Straits a bit to avoid the main current.

Near Dinorwic I called the lock master on the VHF and they were kind enough to let us in. We made the lock at 12:40 and moored up at 13:00. After paying the fees we had a nice cup of coffee in the sunshine. 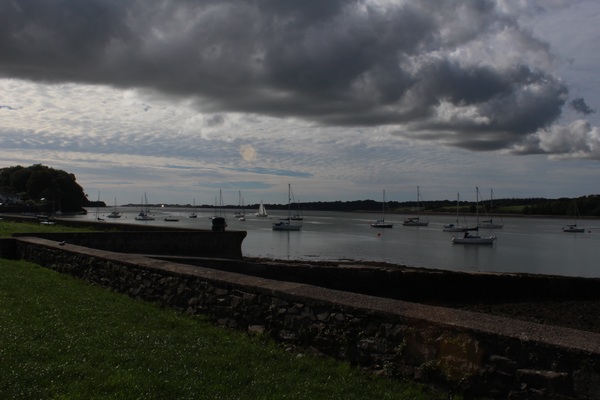 The rest of the day we walked through the small town, had Guinness on the seafront and visited the boat yard. 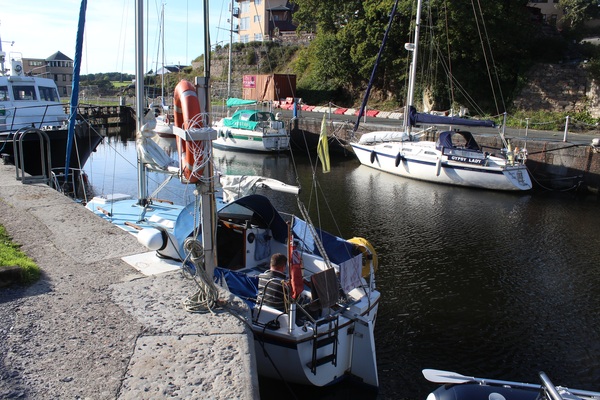 In the evening we looked at the next leg. For Tuesday the forecast was an F3 South increasing to F4/F5 from the SSW but Wednesday strong wind was predicted. Therefore we thought we might as well head back to Conwy and have a day sail in the bay on the last day. 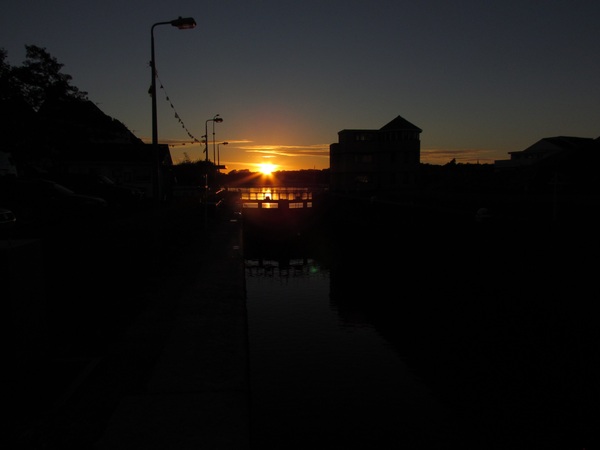 A calculation of Swellies slack, -2:30h before HW Liverpool (12:15) meant we had to be at Britannia bridge the next morning at 09:45. That would mean up early and bribe the lock master to let us out as early as possible.

We woke up at 07:30. The forecast was an F3 from the South, increasing to F5/6 in the afternoon. The afternoon in Wales starts early... 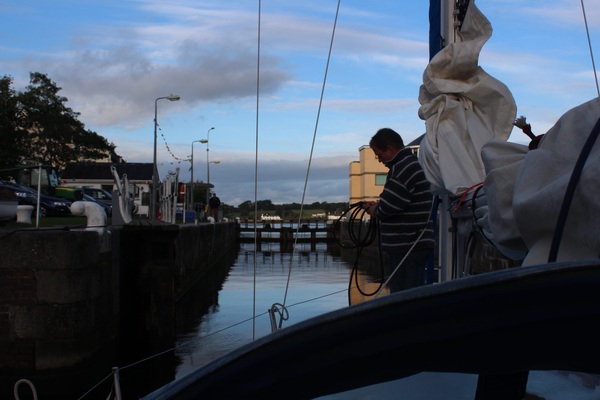 The friendly lock master let us out early and gave very specific instruction to follow the left stone wall about 3 meter out, turn 90 deg at a pole and then quickly back to avoid us hitting old motor bikes, prams and car parts that were glued down in the Dinorwic muck. We passed without a hitch.

Our arrival at the Britannia bridge was early and had to hover around for about 45 minutes. This was a good time to make some breakfast and strong coffee. 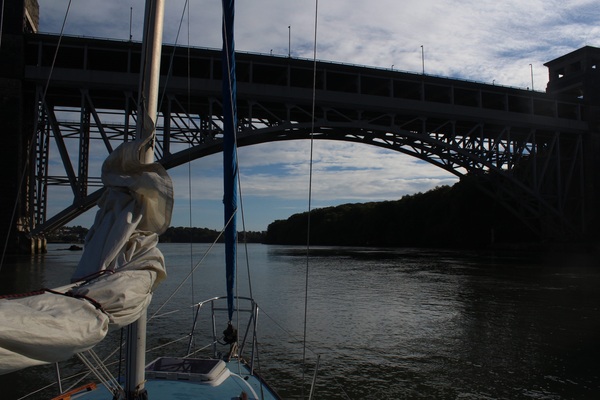 Britannia bridge and the start of the Swellies

We flew with nearly 6 knots through the Swellies, still with a 2 knot current under the keel which would follow us all the way to Bangor. That was when the Welsh switch on the wind engine. 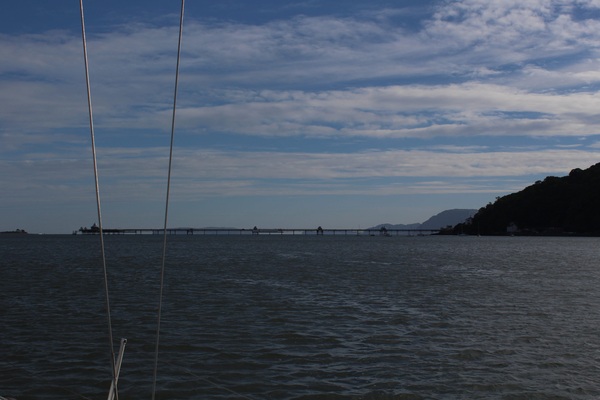 Bangor pier, just before the wind changed from F2 to F6 in 10 minutes.

It was not even 10:00. Near Bangor pier the wind increased rapidly from a light breeze to urgent reefing time. With one of the gusts the kicking strap broke out of the mast foot and the always alert skipper had to make emergency repairs while control over the ship was handed (did I ever give it away?) to Ronald.

Even though the current was against us (2.5 kts) we flew past Beaumaris with the following wind. At 11:10 we turned to starboard into the Penmaen Swatch. I expected it to be very bouncy but at a beam wind Anyway was behaving very well. 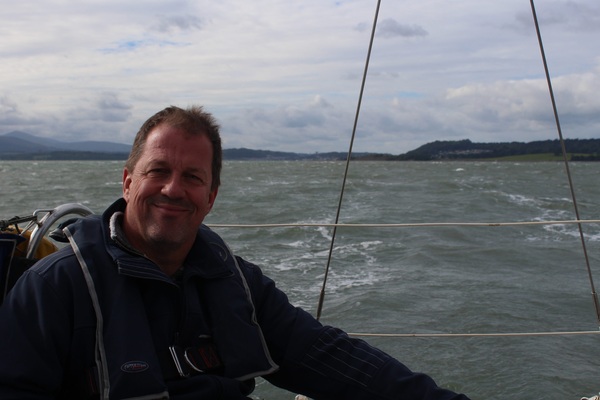 Sailing along the Anglesey coast before heading towards Conwy

Near Conwy we had some rollers with the wind behind us now, but we moored safely at 14:30 having covered 19.6 Nm with a maximum speed of 7.6 kts (and that is fast for Anyway).

The next morning was partly used to repair the dinghy, which deflates itself rather quickly. That affects the buoyancy and eventually affects its occupants dryness.

The wind forecast was a F4 to F5 from the SW. 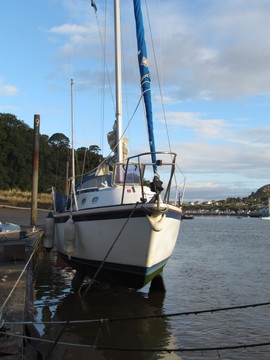 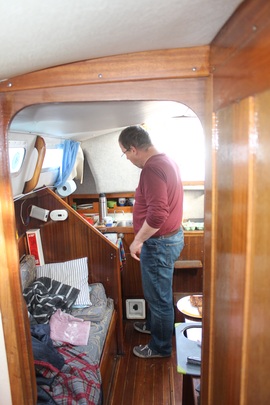 We set of at 10:00 with just a little wind from the South. However, once in Conwy Bay it increased rapidly again, revealing that about 10:00 the Welsh switch on that wind generator. I measured F6 (30 mph) out near the Great Orme as we sailed across the sand banks up and down, keeping a weather eye on the depth gauge. 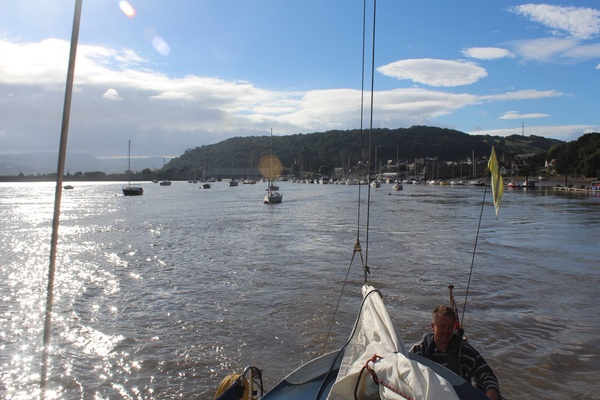 At about 12:10, we started to head back and motored to get fuel on the fuel jetty. After a little more pottering, it was time to call it a day as Ronald needed to get a flight back and I was expected home. 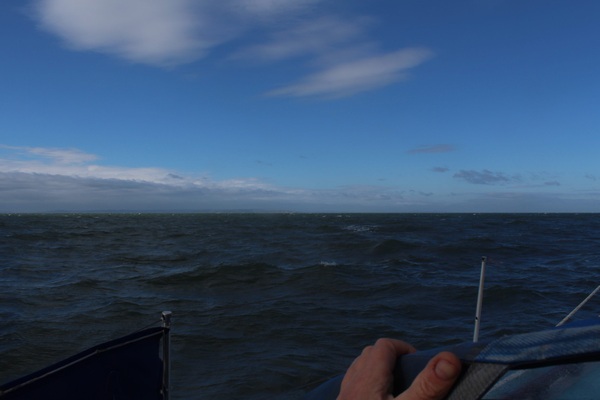 All in all, a few days in late September provided a great sail with a good friend and time to blow cobwebs from the mind. 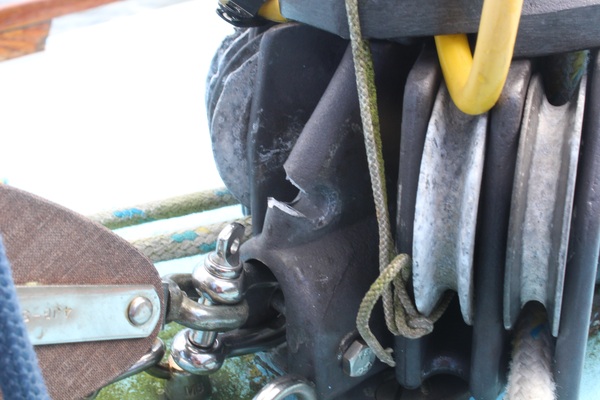 The kicking strap repaired and the damage to the mast foot