We got into Conwy to hopefully enjoy a full day of sunshine, predicted for the Sunday. The Saturday was reserved for maintenance work. The electrical system of Hazel Anne proves to be challenging. One issue is that the steaming light was not working. This could theoretically be resolved by sending someone small up the mast with a screw driver and a light bulb. Volunteeeeeeeeer..... 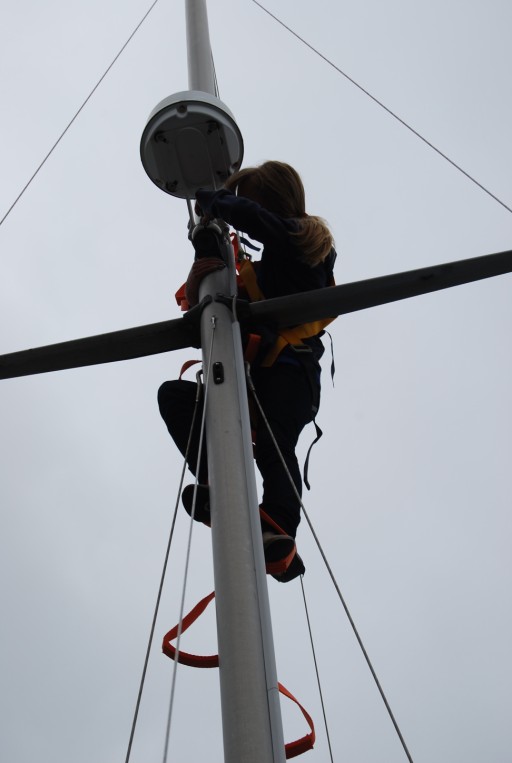 How many Meryls does one need to replace light bulb?

While preparing the climb up the mast, our neighbour from Alcazoro, Alan, suggested we could use his rope ladder, which was indeed a great help. However, shouting instructions from below to a relatively inexperienced lightweight electrical engineer wasn't quite getting a result and therefore a heavier engineer with a better screw driver was deployed. One hour later light was shining forwards, which meant we can now not only sail at night, but also use the engine!

Later in the afternoon we were expected visitors from Selattyn. John, Amanda, Holly and Sam had planned to honour us with a visit to the pontoon. Not too long after their arrival and a few drinks, John's sister Jean and husband Martin, arrived with their outboard and motor yacht (in that order probably) and joined us on board. 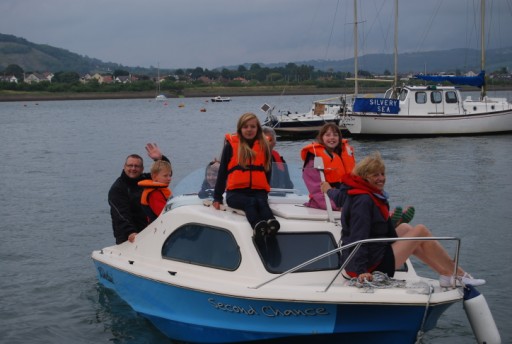 It was quickly decided to go for a small trip in search for the excitement which many horses can bring to a small boat. Although I did not attend, it certainly lived up to expectations. Better, later in the afternoon the fuel berth structure was tested for strength by the same power boat. I believe the fuel berth won. The Pierson family was going to get a lift from Jean and Martin, to be dropped off at the fuel jetty. Strangely we (Geke and I) were able to out-row the power boat but I was told that the main delay was caused by the several attempts to moor up on the fuel berth. But that was all part of the planned entertainment.

Sunday was the last day of the Conwy River festival and the day of the Old Gaffers and Nobby race. We planned to join them and sail into the bay like last year. But the start was earlier than expected and we were later as expected. Therefore the plan changed to join them as soon as we were ready. 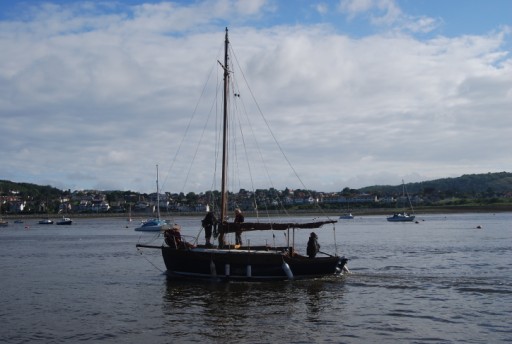 Join later can be stopped by low tide. At 10:45 we were ready to leave with 0.5m under the keel at the mooring. Low water was expected at 13:18 BST (2.5 hours away) and it was a neap. However, we crept over the shallows of the A55 tunnel with 0.5 m to spare. Soon after we noticed one of the Nobbies on its side stuck on a sand bank. Keeping an eye on the depth gauge revealed little water under our keel (0.4 m) when we were close to Perch and we started to get cold feet. Not wanting to spend potentially 4 hours on a sand bank in Conwy bay we decided to return. However, on the way back we hit the ground over the A55. It is believed we did not caused a leak to the tunnel directly below. The engine in reverse did pull us off the concrete sand bank and we spend the afternoon on the nearest pontoon, enjoying the sun and doing more varnish work. Well that is sailing as in ... expect the unexpected. To avoid these things, one can deploy one of two work arounds:

A - Learn to navigate and read tide tables

B - Be ready on time

When the tide returned we sailed back to our pontoon and pretended to return from a long and windy trip. 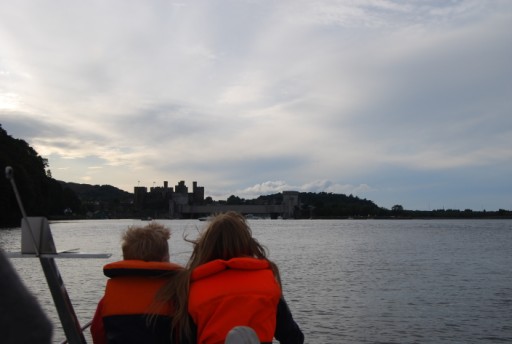 After tea, Jean and Martin came along side with for a 2nd time in 2 days. We all went for a trip up river which was quite exciting providing one enjoys flying low at 20 knts over depths varying from several meters to several inches.

After that we returned to Hazel Anne and around bed time for Timo, we decided to take Hazel Anne to the fuel berth to stock up on water, while there was still enough water, if one can still follow that. 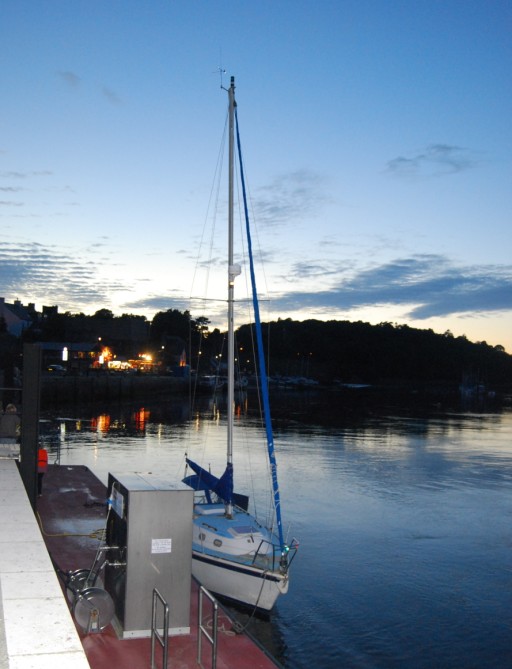 A late visit to the fuel berth for water

The next day forecast was following the appalling weather pattern of this summer and we returned home early.