Fishing. Fishing was the plan. As both Geke and Meryl were in the Netherlands, Timo and I were going to go out to fish. Depending on wind it would be somewhere around the Great Orme or Puffin island.

As the women had stolen our only car, we left home with 2 rucksacks and two oars sticking out. It did raise an eyebrow or two when we tried to hitch-hike to the railway station. We were lucky and were picked up a mile outside our home and got in time to the railway station. The weather had changed from pleasant sunshine in the morning to a tiny bit of rain occasionally. Once we stepped out in Conwy, the clouds looked more threatening. 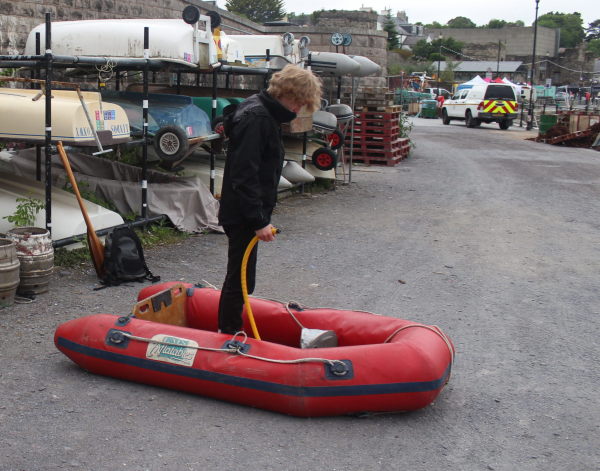 We rowed or floated with the tide from the fuel jetty to our mooring. Once on board, we cooked tea and then decided to get shopping for the next day. By now the tide was out and when we approached the foot of the jetty we hit the sand about 4 meters from the bottom steps. Not a problem, normally, but this was not normally.

The sand cleverly disguised a mud bank directly underneath and would only allow one foot to step on it. Once you lifted your safe foot out of the dinghy it would swallow the other. So dancing from foot to foot like a Gecko on hot sand, we pushed the dinghy past us further on the bank to use as a walking platform. Yes, we are resourceful.

We walked the length of the dinghy and then realised we were still 2 meters short of the bottom step of the jetty. Next we used the 2 oars parallel to each other as a temporarily static snow snow shoe and finally managed to get to the bottom step. Pulling the oars out of the mud was quite a job. Probably more to do with my weight than Timo's. We spend the next 5 minutes cleaning our shoes, knowing everything would be smelling of Conwy mud. For the uninitiated; Conwy mud smells unpleasant.... and takes a fortnight of daily bathing to wash off.

After our shopping we had to wait for the tide to come in as a 2nd mud trip was not desirable. Instead we had a drink at the Liverpool arms and the heavens opened. In full weather gear and shopping we rowed back. After playing poker and other card games we settled for the night with the plan to leave at 10:00 the next morning.

At about 09:45 I woke up and therefore slightly missing the 10:00 cast-off-to-go-fishing target. About 1 hour later we started the engine and joined a fleet of boats leaving the river. As the tide was rushing in, it was quite a challenge to get through the Delganwy narrows. After that the auto helm came out and we set course for Puffin. There was very little wind but I set the sails none the less. However, the genoa roller reef was not eh.. rolling. Stuck.

Heading out, leaving Delganwy behind

The thought "I'll leave that until we are back in the evening" was replaced by "would a real sailor leave it until he reached America?". "No" was the stern answer so I sat down on the foredeck enjoying the swell from the NW to work on it. After manually unfolding the sail many times around the forestay we lowered the genoa but I could not find anything not rolling. The genoa was raised again but got stuck when unrolling. This time we had a little more sail so I left it. I wasn't going to America after all. 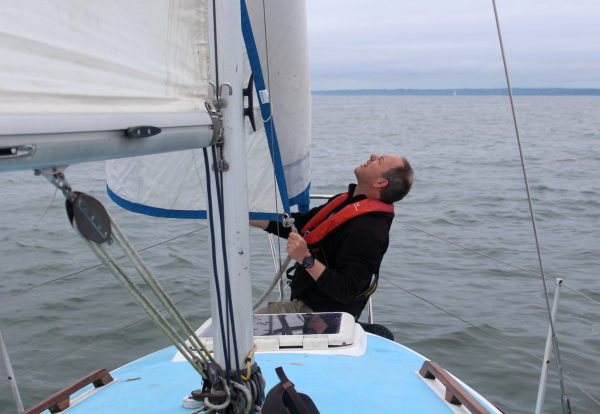 The roller reef not rolling

We tested the radar as Timo concluded that sailing was boring. "Look, there is an island in the distance and it is going to stay there for the next 2 hours and not get any nearer."  Only in the last half mile, it suddenly inflates itself to become a little larger to give the impression you are approaching.

As we approached Puffin island, we noticed a set of new buoys, of which, I admit, I did not know the meaning. As I was frantically pacing through my almanac, I heard "Ok Google, what do these yellow buoys mean". Surprisingly, Google stated that these were special marks. The only thing it did not reveal is what made them so special. It was clearly marking a special patch of water next to some more water. Expecting several German WWII sea mines lurking just under the surface, we avoided crossing the area, which goes back to the old adage: in doubt... blame the Germans. 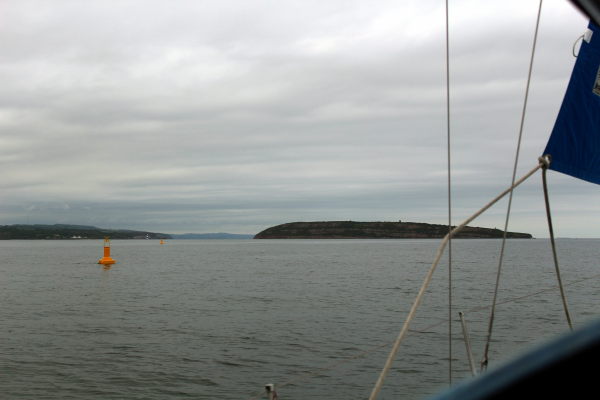 On the NE point of Puffin we found a group of canoes surrounding a few curious seals. We joined them for a minute and one seal headed for our boat pretending to be a German torpedo (sticking to the same blame the Germans theme now) but it sank before it could reach us.

Next we set off to find a spot between all the little motor boats that were fishing. I did not anchor but used the sails to move us at 0.6 kts between them. Timo cast the fishing rod out and we were staring at the water surface awaiting the pending battle to get a massive mackerel on board. Nothing happened for the next 5 minutes, so when I was making my 3rd coffee of the day, I heard "Ok Google, so how do you fish for mackerel?" 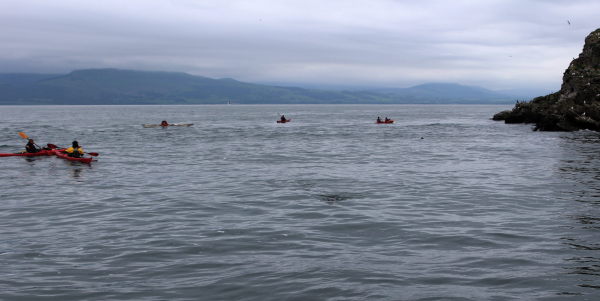 Googles answer was not productive as it described that you needed a fishing rod and that mackerel loved eating sand eels. Yes. ok. Most people like fish and chips, so if want to catch a fish-and-chipper I need to know where the fish and chips shop is. Google did not go into any detail of how to find a sand eel shop.

We bobbed around and it did not go unnoticed that nearly every boat fishing started their engine when we got close and moved away. Was it the Conwy mud from last night?

After 40 minutes crawling along the NW face of Puffin island, the time window that would keep the keel (long metal bit sticking out of the bottom of the boat for no apparent reason) off the rocks and sand on our way back to Conwy was giving its first "return to your seats please" message. We started heading back. No wind, so again the engine was needed.

Nearer to Conwy, we got some wind and for the 1st time, the engine was switched off followed by a nice sail between the sand banks. We got to Perch by 15:45. As the genoa would not budge, I decided to drop the main sail and sort the genoa problem on the mooring. We moored with a flapping sail pretending we sailed and moored on genoa alone.

After this we cleaned the boat, gathered our gear, rowed to the shore and got a fish and chips from the fish and chips shop where there was a gathering of fish-and-chippers. Sadly we left the fishing rod on the boat. The only thing we managed to catch was the train back at 18:15 and then walked the 3 mile from Gobowen to our house.

No hitch hicking as the met only 2 cars in 45 minutes. One was black and tried to see if you could travel back in time by crossing the magical 150 mph barrier and the other passed us 300 yards before we got back home. Oh well, the walk was good (bare feet the last mile as I could not find that stone in my shoe) and demonstrates the advantage of living in the country side.