Like summer, maintenance was late this year. I had planned to do the anti-foul work in April but the harbour office was not open in the weekend until May. The harbour office has the process critical pressure hose.

The routine now seems to be 1 year we lift out, the next year we dry out.

So I took the early train to Conwy on a Saturday morning armed with oars and life jacket.  Sitting in a train with a life jacket tends to get you funny responses from the train conductor like "no worries mate, I know the train driver, he is experienced, you won't be needing those".

Arriving at Conwy Quays at 09:15, I saw that my spot where I planned to dry out was taken. I had no option but to use the same location where I dried out last time, in mud and stinking semi rotting mussels. However, nothing stays the same with 8 meter tides. The ground turned out to be mainly gravel later. 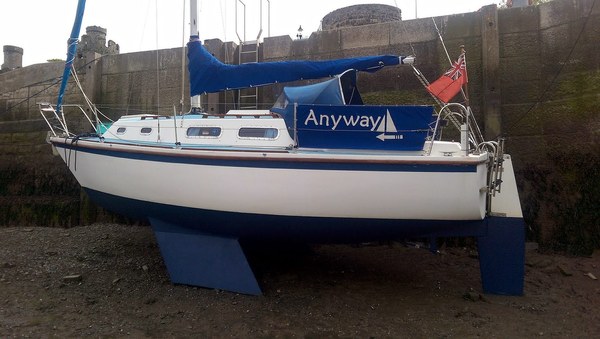 Dried out on an uneven keel

I checked an accurate tide graph on my phone and calculated we would be grounding around 12:10. At about 11:35, while sipping coffee and reading a book, I noticed that planet earths horizon was clearly at a funny angle. I had forgotten to add the 1 meter keel to my dry out calculations. Desperate to push the boat from the wall, to allow me to power hose and anti-foul, I pushes as hard as I could with my back on the wall and legs on the boat. Luckily, I managed to shift the 1600 kg yacht a little.

The next 1 hour was spend hosing the hull and deck down. I now know that deep down, the deck is blue and not green with a hint of slurry brown. After that the all time popular anti-fouling-on-your-back-in-the-mud job.

At the end of the afternoon, a short break in the N.W.C.C. was used to wash and warm the inside with a glass of wine, while an encouraging discussion took place why it is pointless putting pressure on kids to revise for GCSE exams and it was better to go sailing.

At 19:30 I was meant to float again, with keel used in the calculation, but it was 20:00 before we came off the bank. I motored to Perch to watch the sun set over Anglesey and then turned back to my mooring. Early bed. 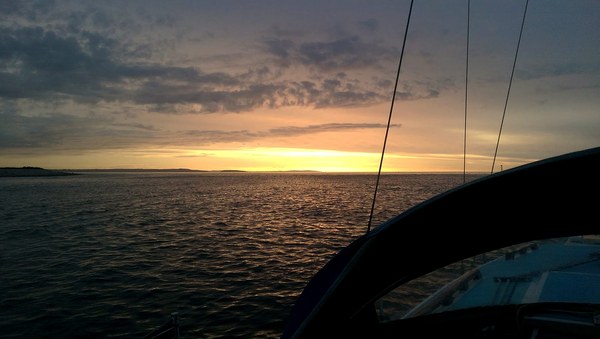 Next morning, I woke up to glorious sunshine. This was not a day to do jobs. This was a day to go sailing. Breakfast was made up of 2 dry baps with peanut butter swallowed down with black coffee while preparing the boat. Dropped the mooring lines at 10:00 and headed out.

Strangely, once in Conwy bay, bar for 3 yachts it was completely empty...on a Sunday...with glorious sunshine...and a F3 from the NW. 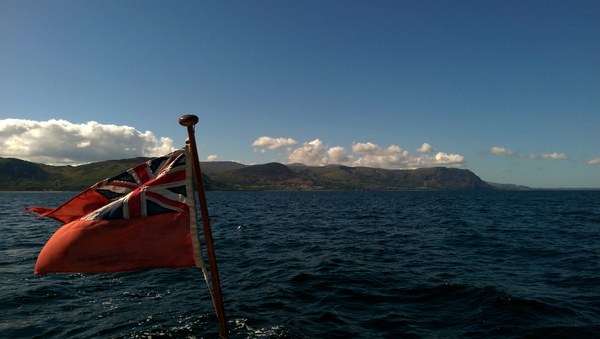 Out sailing in an empty Conwy bay

Despite the potential danger, I carried on, tacking towards Puffin and then crossing the sand banks towards the Great Orme. The wind was initially a firm F3, but as it died down a bit, I tried to unroll the genua, which, as last time, was stuck. It did not decide to get unstuck while sailing on auto pilot with me working on the foredeck.

It was time to head back and as the wind now dropped, I called in assistance of the engine and we motor sailed back. At about 12:30 I was back on the mooring. Did more maintenance work in the afternoon to pick the train at 15:00 heading back home.