Saturday, 29th of May

So this was attempt 2 to join the N.W.C.C., this time for the spring sail. The trip would take us 1st to Port Dinorwic, then to Caernarfon and then further to Llanddywyn Island.

The crew was made up of Chris, Timo and Sam under command the not yet famous capitan Cook. High water was relatively late and we were going to go through the Swellies at low water slack. This time on pupose. 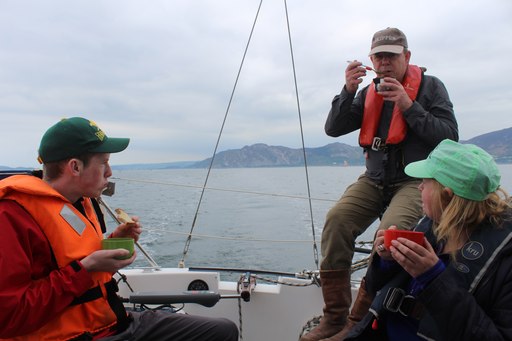 Lunch on the way to Puffin island

We left Conwy at 12:05, with the tide going out. We had to sail around Puffin island. We had plenty of time to once again try to unsuccessfully fish near Puffin. It worked, we successully caught nothing. We slowly floated past Puffin and then headed towards Beaumaris.

And then it happened. Near the B6 buoy, we approached an inflatable rib, occupied with the what we reasonably assumed were the usual boat refugees in trouble. Why else break down to close to the coast. The Welsh coast in this case. I suspect this all the fault of Brexit.

White smoke was coming out of their engine. I remembered from my diesel engine course that white or black smoke means that the engine is about to surrender to the mood of the currents. Experienced sailors know that you always try to help other sailors in trouble, even those with an unknown migration status and at the risk of missing slack water at the Swellies. 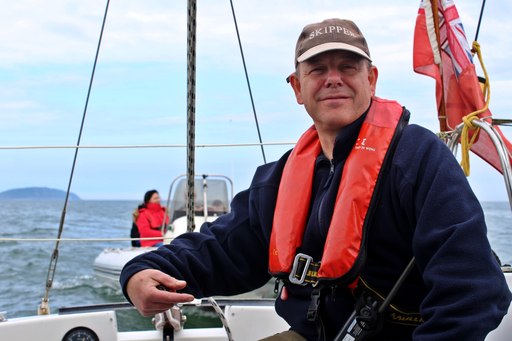 With hindsight, I think the refugees regretted being rescued by us. A working rib will easily sputter across the water at 25 kts. Our slightly dated Volvo diesel engine has 18 horses built in. But hooves are not the most efficient way of making way through water. While  recuing a rib, we usually dont make much more then 2.5 kts. We believe they were utterly bored after 3 minutes of being towed.

We sort of dropped them off at Gallows point in very shallow water. The reward was an immense feeling of pride that we rescued instead of were being rescued. I'm not sure if the club has a medal for this. 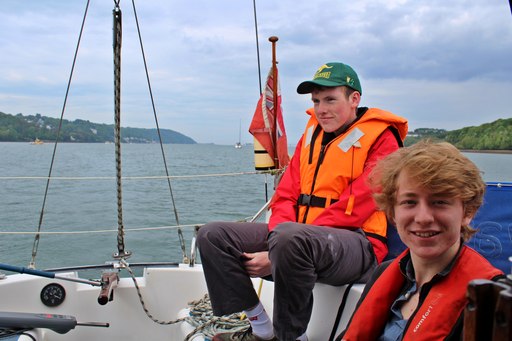 Sam and Timo near Menai Bridge

We were slightly early at Menai and had to wait for the tide and quite a few other yachts from the club gathered at the same time. 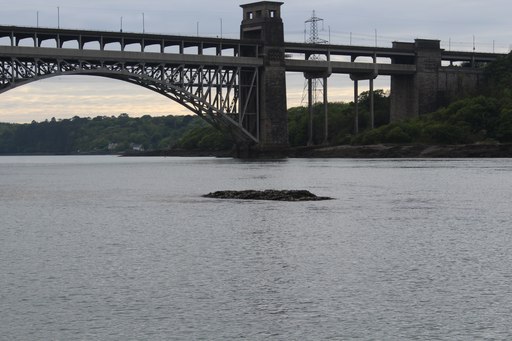 Cribbin rock in the Swellies

Getting through the Swellies is easy at slack. You just need an semi experienced skipper or you just follow the boat ahead of you. We had boat ... sorry ... both. Pronunciation problem.

Port Dinorwic is only around the corner after leaving the straits and we picked up a mooring buoy fairly quickly. The dinghy took us ashore and we headed straight for the pub. The rest of the club was clearly more organised and lit their BBQ's whiel rowing ashore. 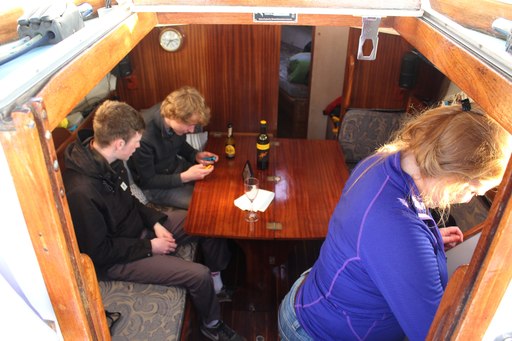 Sunday 30th of May

We woke up to a beautiful day. We had a short sail ahead as the plan was to go to Victoria dock in Caernarfon. We were moored on a swinging mooring. We started the motor and dropped to mooring line. I could have checked the wake of the prop but, you know, sometimes you expect the best.

Instead of the more traditional moving forwards, we slowly drifted backwards with the current towards a solid looking stone wall. The gear lever failed to encourage the engine to rev up. A quick thinking captain dropped the anchor and then investigated the problem. It appeared the gear lever push pull had snapped. 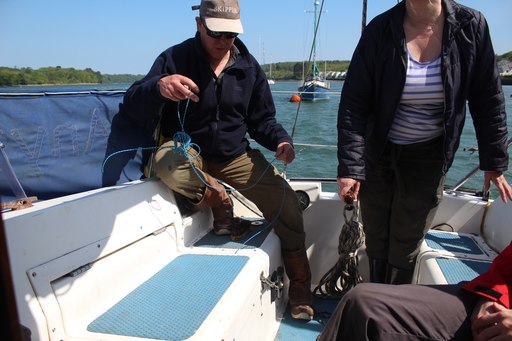 After moving my hand in between moving part of the engine and pulling on some random levers the throttle lever was found. Next we rigged up a communication chain. On the foredeck Timo. He would call instructions to get back to the mooring buoy, Christine would steer and the captain would be the remote controlled throttle controller. 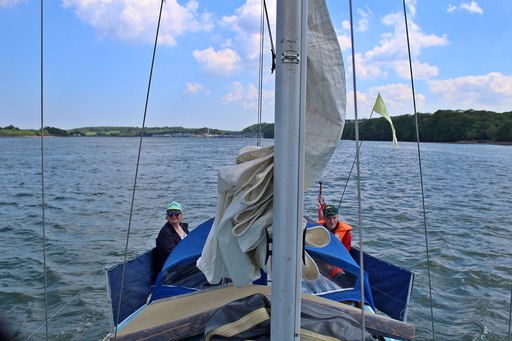 On the way to Victoria Dock

With this engenious communication chain we managed to get back on the mooring and next rig a thin line to control the engine which appeared to be very successful and reliable for the rest of the trip. 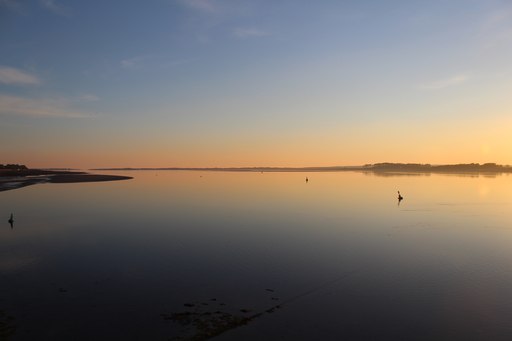 Sunset as seen from the Royal Welsh Yacht Club

We managed to join the club again in Victoria dock and wandered around sunny Caernarfon. For the evening we were invited to the royal welsh yacht club which is housed inside the beautiful Caernarfon city wall with view on the Menai Straits.

Monday 31st of May

The next day was again glorious. Slack water in Aber Menai was later in the day so we would leave around 13:45. 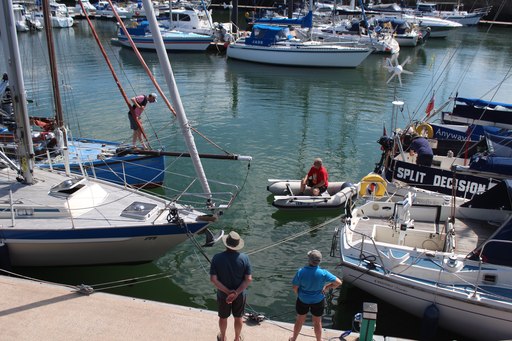 If a sailor has spare time then they resort to what is referred to in naval circles "pottering". It hasn't anything to do with clay but it more referring to time spend on essential or non-essential repairs or improvements. 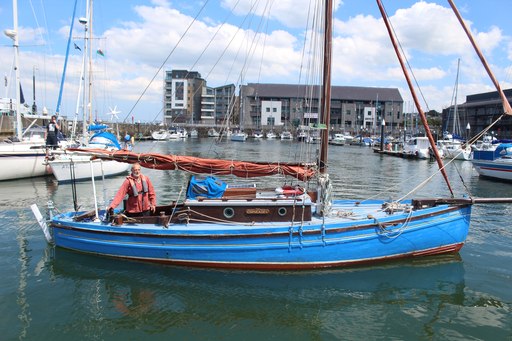 One by one we left the narrows of Victoria Dock and set sail for Llandwyn Island. The wind was light from the SE. Fairly soon the plan was changed via VHF chatter. The rest of the group wanted to head Porth Dinllean on the North coast of the Llyn Peninsula.

I had never been to Llandwyn Island and was keen to see some mermaids, so we announced that we were going to stick to the original plan. We followed the planned route and moored in Mermaid cove. Just as we finished anchoring next to another yacht I saw the owned had tried to tell us something but gave up. That would come back to haunt us. 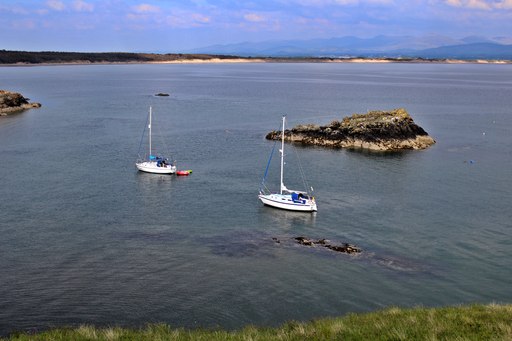 We rowed ashore and made a lovely walked along the beaches and rocks. On the way back I wanted to take a picture of Anyway from above. Only then I noted what the other skipper had tried to warn us for: a large rock had appeared right next to us. If I had studied the pilot book properly I would have noticed it. Lesson learned. 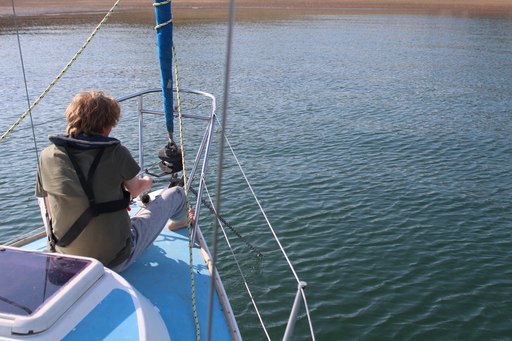 So we lifted the anchor and dropped it in better place. Time to relax. The BBQ came out together with the guitar and the wine. 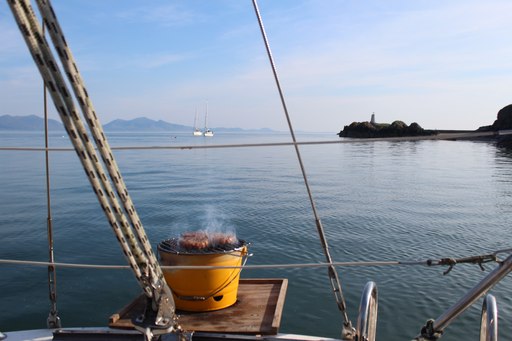 We decided to stay put and reconniter the peninsula. Llandwyn Island was the mooring spot of the pilots that guided ships loaded with slate in and out of Caernarfon bay. There are still some cottages that were built near the towers to house pilots. Two of these cottages have been restored, with one housing an exhibition about the local wildlife. From 1840 a lifeboat was stationed there. It is a beautiful place. 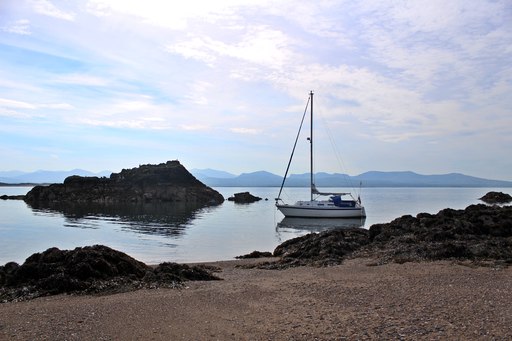 We went in search of the wishing well. It's believed the well is home to sacred eel who can predict whether couples’ relationships will succeed; It is said that if you drop an handkerchief with some crumbs on the top and it remains afloat, then the couple is faithful to each other. 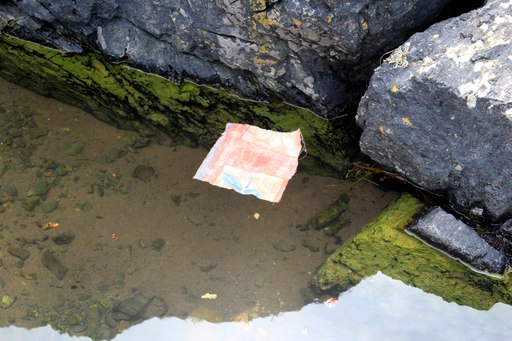 We didn't have a handkerchief but an old rag that was once a curtain, had to proof the principle. As one can clearly see in the picture above; it floats. 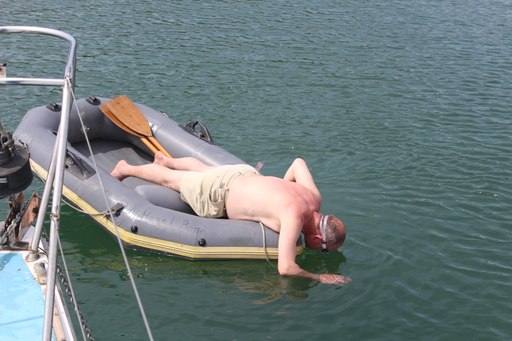 As we got back to the boat, I wanted to know what the settled anchor looked like on the seabed. It wasn't an elegant display and caused some laughs amongst the crew. 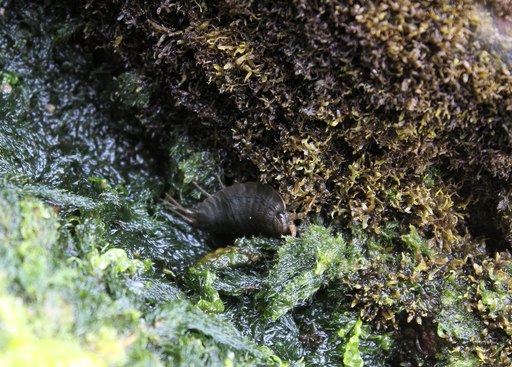 We also found a Sea Slater (Ligia oceanica) which have this prehistoric appearance. 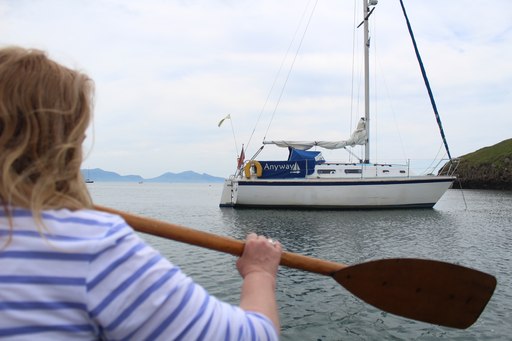 The weather stayed relatively calm but overnight the wind would turn east to a F3/F4 which might make the anchorage a bit uncomfortable. I was slightly concerned as all the other yachts had left and we would find ourselves on a lee shore if the forecast would turn saur. 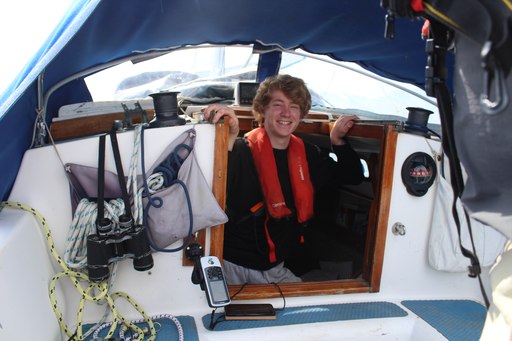 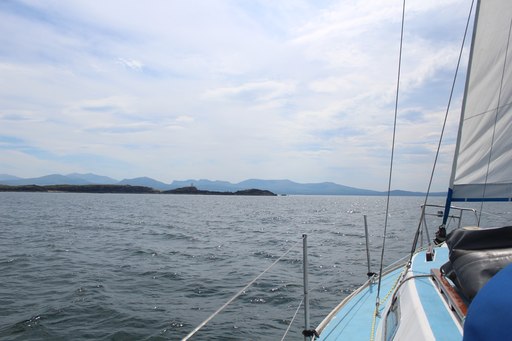 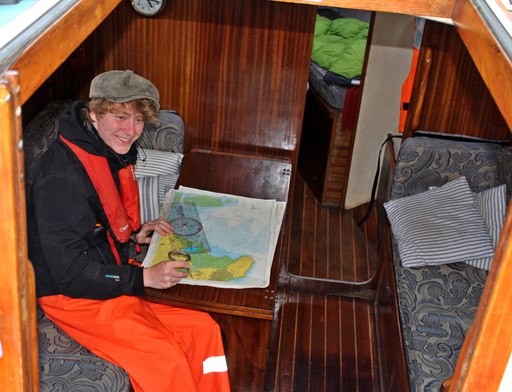 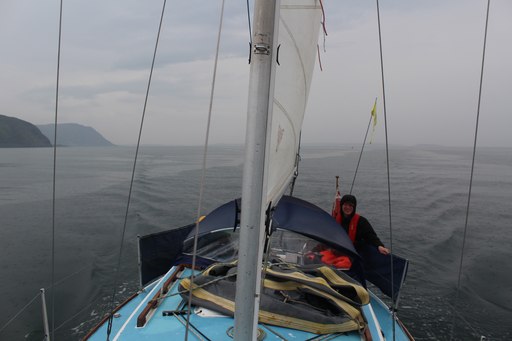