It was that time of the year again where the annual migration of yachts to higher lands starts. It's a sort of nesting instinct, where the owners think if they do not immediately take their floating money magnet out on dry land, it will sink forever into the dark waters of the river. In the process they obviously spend more money. Naturally we followed suit. 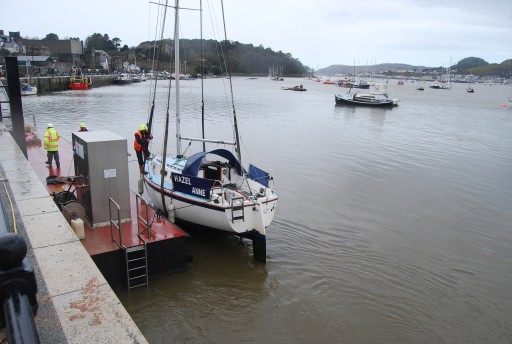 Ready to be lifted

After we arrived on Saturday evening the weather deteriorated drastically. In the night the wind was howling, disturbing even the skippers sleep. The next morning it still looked as if the crane could attempt to fly a yacht for a kite but magically, at 10:00 some Welshman forgot to put a coin in the wind machine and within 15 minutes the wind dropped to an acceptable level.

We were 2nd on the lift out list, just after Brambie. We motored up river and waited for our turn. Trouble lifting Brambie out gave us around 20 minutes to practise motoring backwards and forwards slowly on the currently. Rudder control on a Griffon is brilliant. When it was our turn, we worked like a well oiled machine. Moored up, dinghy out of the water, slings in place using the line rigged under the keel the previous evening, the kids gather the wooden support blocks, skipper got the camera to record the event. She was out in no time. 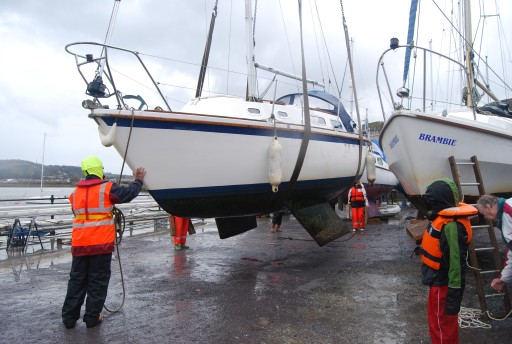 And then the fun starts. As part of the lift, we can use a jet washer and child labour was re-introduced. Amazingly our Bangor mud was still stuck to the hull 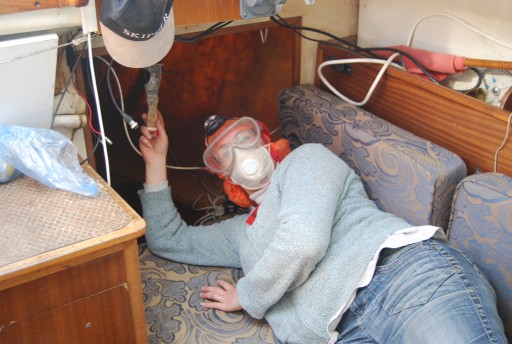 Ripping out the headlining, a dirty job but someone's got to do it

A whole day was spend on taking all the varnish of the woodwork, followed by 5 layers of varnish with some anti-fouling for variation. Seacocks in the hears were serviced, a new impeller, headlining of the quatre berth removed, inspection of the rigging, cleaning of the heads, ignition panel cleaned, lines washed, deck scrubbed, electrics partly documented, and the sprayhood washed. That will do. 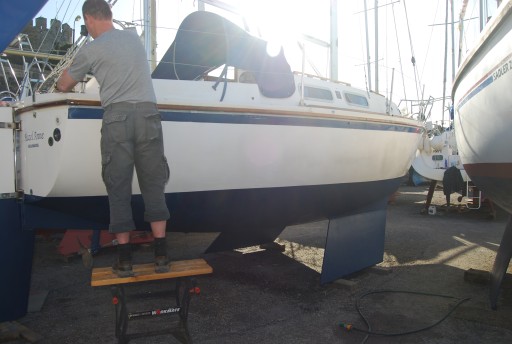 Varnish work, sunny job but someone's got to do it

Then the annual re-migration into the water arrived. The plan is to

I got successfully past point 4. Even got the engine started, but as no cooling water came out, my recently gathered diesel engine knowledge told me not to motor off against the current until black smoke and silence would send me back under the Conwy bridge. I asked if Hazel could be moved backwards on the fuel jetty so had some time to check things out. Swapping the new for the old impeller didn't explain anything but it solved the problem. Back on the mooring, even the new impeller decided to spin water around. 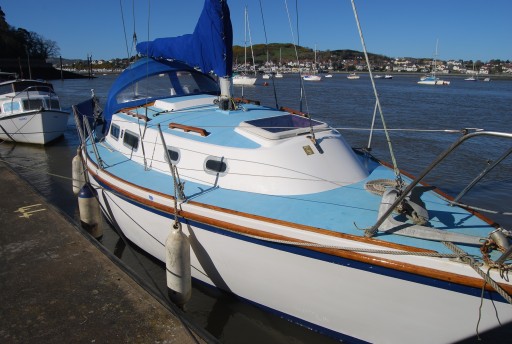 Back in the water

Next I had time to start documenting the electrics. At around 15:30 (2.5 hours before low water) I decided this was the best time to moor Hazel Anne with proper spring lines. Working on the bow line, the stern swung out into the river. Normally not a problem, except that the tide decided to ground the boat in the 30 seconds that fell between doing the bow and the stern line. Great, now I had managed to diagonally moor on the pontoon. Looking around, this appeared to be quite an unusual arrangement. Luckily my new neighbour was staying overnight and he agreed to put her back in-line with the pontoon. Phew.

Geke picked me up at 17:00 and it was off home ready for a new season.