Maintenance, who needs maintenance? This year had a chaotic sailing start due to changed family circumstances resulting in having less time. Further complicated by a delayed anti-foul paint delivery. I had taken a week off at Easter allocated to do the usual mudcrawl-on-your-back-while-the-tide-is-out job. The anti-foul delivery came 4 days late. By then the low tide window had moved from day time to evening time and other weekend obligations cut time short.

But the planned Isle of Man trip forced me to get at least the bottom power washed to persuade a whole tribe of barnacles who comfortable settled between the keels to relocate to the mud below. 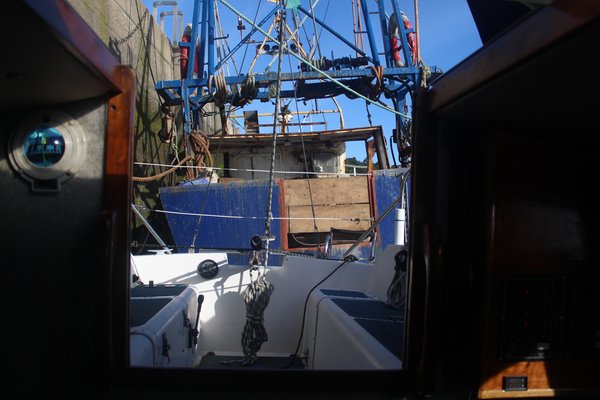 Dried out to the harbour wall

Again finding time was difficult. Saturday morning was spend to get Timo to music, then pick up his girlfriend, drop them off in town and then rush to Conwy.

I calculated that I had to be moored up on the harbour wall before 14:00. Any later and the moon would have borrowed most of the water. After swirling around a traffic queue on the A55, parking car, rowing to the pontoon, start engine, cast off it was about 13:45. I approached the harbour wall and could just see space between a long keeled yacht and a fishing boat. Just enough space. As I approached the depth gauge screamed "Beep Beep Beep" which is short morse code for "you only have 0.5 meter under the keel you idiot". I motored past the long keeler and its owner came out with a look only far superior fellow sailors can produce. He said "You should only attempt to moor here at high water". I mumbled something like "we are not all retired and have so many other obilgations and I depth gauge tells me I still have 50 centimeters of muddy water under my keel".

But before I could tie up the nose drifted elegantly off, and I had to come in for a 2nd run. This time with 0.3 meter water under the keel. The morse code changed to "Beep Beep BEEEEEEEP" which most sailors will know stands for "Impact is imminent, urgent call for a new skipper". The long keel owner was even more annoyed and came out armed with a visiously looking boat hook. Daylight attacks are rare in Conwy but I felt the need to keep just enough space between my boat and his so had to lean over dangerously over the water before he could hit me. A quick unexpected pull on his boat hook woud sort out the rest. Anyway, we slid past perfectly and moored up.

Next the long keeler asked me "How long are you going to stay" with that same ubermensch look. I said I wasn't going anywhere at all soon with my keel stuck in the mud combined with fast disappearing water.

The harbour master came out to attached the pressure hose I hired off them and this time the long keeler started shouting that he was there first and we were not to disconnect his water. By now I had concluded we were not going to be sailing buddies and exchange salt water stories. 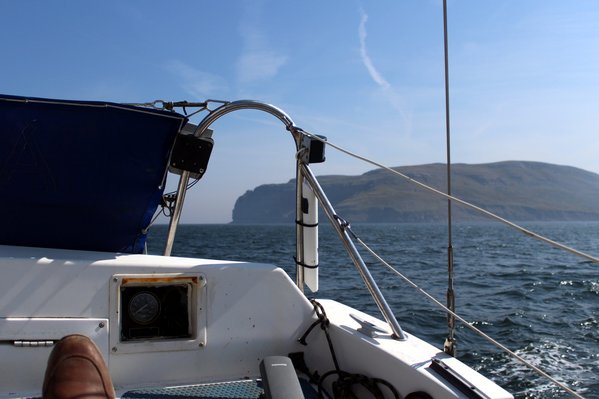 The next comment was that there was not enough time for me to wash the boat and anti-foul before the tide returned. "I think I've done this before" was my reply.

However, where I dried out there was a thick layer of mud while the long keeler was dried out on nice stone. And he wasn't moving anytime soon. So, I managed to hose the boat down, and just anti-fouled as much as I could without having to lie on my back between the keels. This was good enough to get us to the Isle of Man. It takes weeks for barnacles to apply for planning permission on my hull and even then they still have to start building. I was save.