Last year, we had a great sail in the bank holiday to Redwharf bay. This year, the WhatApp group chat for the N.W.C.C. was full of chatter about trips to be. Along with the weather forecast the chatter changed tone a bit to "well I think we'll be spending the most time in the pub actually". The forecast was a F5-6 with F7 gusts. 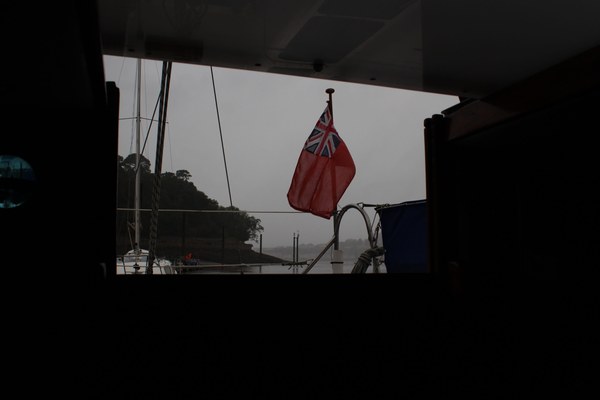 Looking through the hatch at miserable weather

I got to Conwy on Sunday, thinking just to nose out but the wind was already gusting in Conwy channel and the tide was going out. That would be wind over tide, so I headed back. Dried out on the pontoon, I resorted to hull scraping duty and prop clearing work. The wind kept gusting that evening. I sorted out the reef lines on the main which were rigged the wrong way around.

The next morning the weather forecast remained similar. But as the tide was coming in, I thought I will put in a double reef and see what it is like out there. Tacking was going to be easy now with the repaired boom traveller. Cast off was at 10:15 and heading past the Beacons, I raised the main with double reef and followed two other motoring yachts out of Conwy channel. 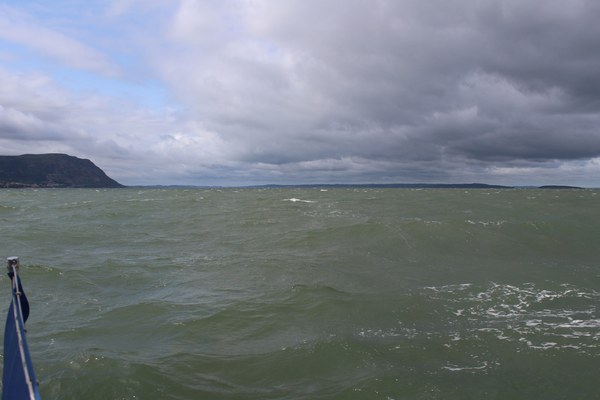 The wind was from the West and indeed strong, measuring F5/6. I tacked up the channel taking tacks as wide as the depth gauge would allow (kept a 3 meter safety margin). The other two boat were quickly disppearing towards Puffin and raised their sails much later.

The boat bounced up and down some steep waves and a lot of spray washed over the deck. At about Pen Man Bach I turned back as the tide was turning and it would be wind over tide coming back in. The plan was to drop the main and roll out the genoa as far as comfortable but again the genoa had different thoughts. It would not roll out, which in strong wind is always better then refusing to reef. But it needed looking at.

The afternoon plan was to solve the roller reef problem. It appears that the top roller does not roll well, so I dropped the genoa and found 2 large philips screws. 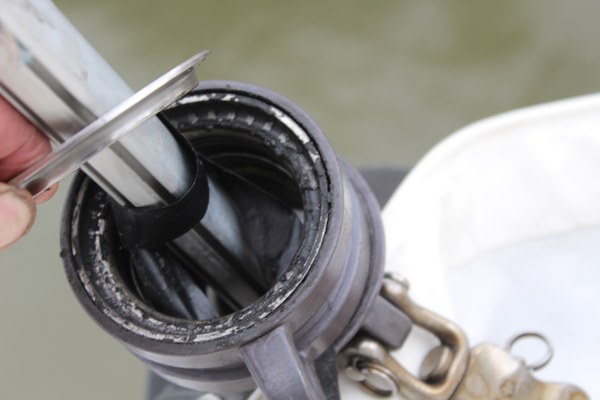 Working on the forestay with water all around, I wondered what could go wrong if I undid these. As a precaution I pulled the genoa in a sort of funnel shape. Pulling the parts slightly apart showed lots of lose ballbearings, stuck in a sort black glue, which in a previous life must have been grease.

Very carefully I caught the ballbearings and cleaned parts. Then came the very tricky part to assemble both the top and bottom ballbearing without losing any parts. Two hours later it was all back together and a quick test gave the impression of improvement. But it really needs testing in anger (under wind pressure). So up to the next trip.